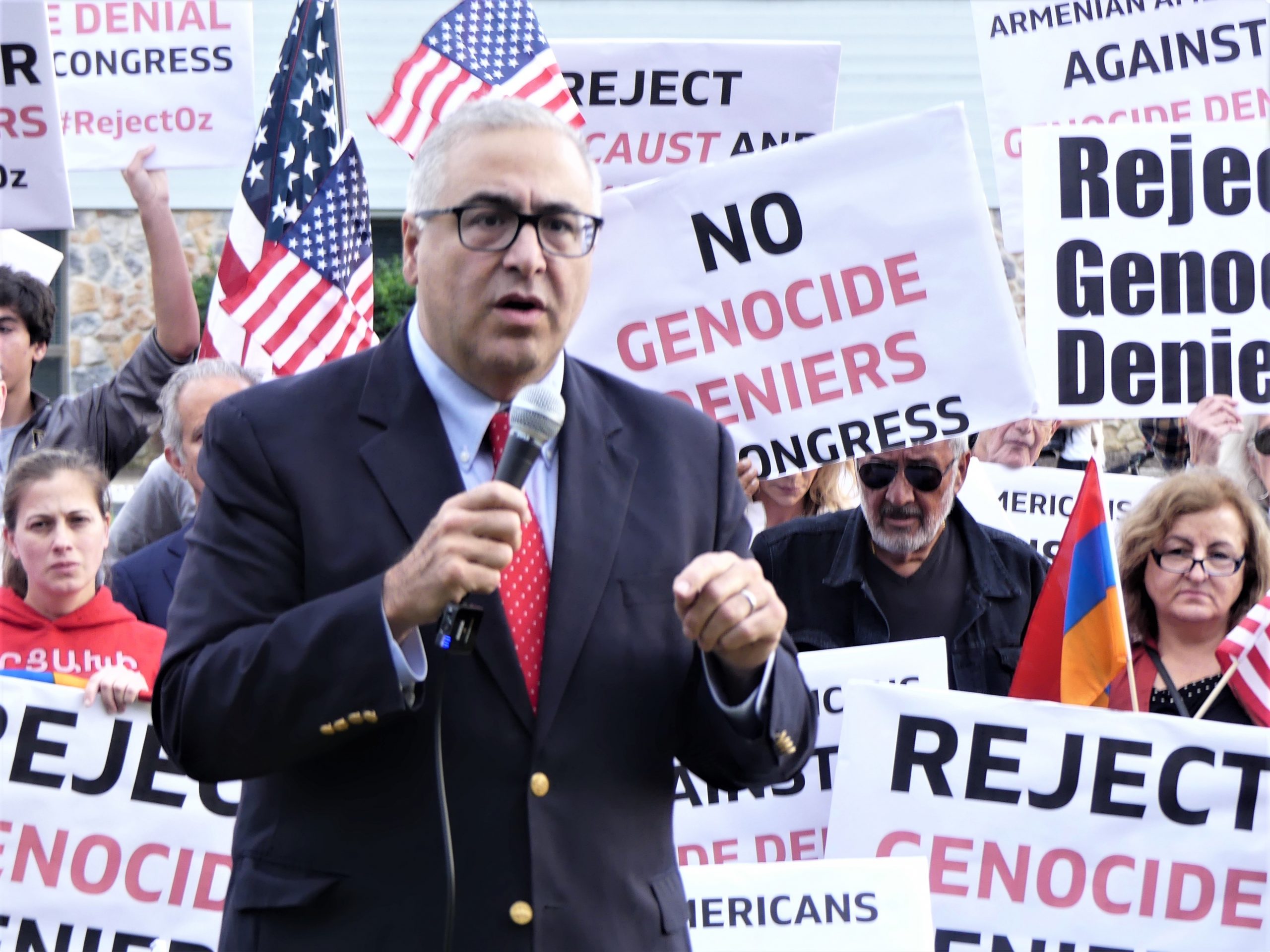 A coalition of Armenian, Jewish, Greek, and Kurdish Americans, gathered at Pennsylvania Senate candidate Dr. Oz’s headquarters to protest his refusal to recognize the Armenian Genocide and to call upon him to end his complicity in Turkey’s international campaign of denial.

“We are here today because as American citizens and descendants of the survivors of genocide, we refuse to allow a candidate to drag the U.S. Senate back into the days of denial,” stated ANC of Pennsylvania Co-Chair Lorig Baronian. “Denial is the final stage of all genocides – and also, sadly, the first stage of the next genocide – because it enables the perpetrators to escape culpability. This is what allows them to recur, and unfortunately, is evident today as we see similar atrocities being committed with impunity against the Kurdish minority of Turkey, to the Armenians of Artsakh.”

“Will we live silently as genocide denial returns possibly to the halls of the U.S. Congress? Will we be silent as one and a half million Armenians continue to be forgotten?” asked Rabbi Shmuley, who stressed the strong bond between the Jewish and Armenian peoples.  “The Jewish community and the Armenian community are not pushed together through the catastrophe of genocide, but rather through affirming similar values about the prevention of genocide. We are here today gathered on a small strip of a highway because the blood of 1.5 million Armenians cries out from the ground and we are their voice!”

In an inspiring opening prayer, Fr. Nerses Manoogian of Philadelphia’s St. Gregory the Illuminator Armenian Apostolic Church stated, “we thank you oh Lord, the giver of all goodness, who has kindly brought us together with our fellow Jewish brothers and sisters, two nations who unjustly endured the pains of Genocide and Holocaust at the hand of the Ottoman Turks and Nazis. Today and every day, oh Lord, help us to amplify your message of peace and justice to this world and especially to those who continue, even today, to deny a historically proven blatant act of savagery and terror – the Armenian Genocide.”

The protest was live-streamed on the ANC of Pennsylvania Facebook page and is available on the ANCA YouTube channel: https://www.youtube.com/watch?v=lB-gYkXLk-o

Dr. Mehmet Oz’s opponent, Pennsylvania Lieutenant Governor John Fetterman, issued a statement in solidarity with the coalition of protesters.  “As a Pennsylvanian, I welcomed the long overdue U.S. government recognition of the Armenian Genocide by the U.S. House and Senate in 2019 and by President Biden in 2021. As a U.S. Senator, I will continue to support promoting public education about this atrocity,” stated Fetterman. “On the other hand, it is deeply disturbing that Dr. Oz refuses to acknowledge the Armenian Genocide. I support those out protesting Oz’s continued and disgusting silence on this. This is an important issue and Oz’s refusal to acknowledge it is both offensive and damning.”

The October 12th action was the third of a series of planned protests – the first of which, organized by Armenian and Jewish Americans, led by Rabbi Shmuley, forced the cancellation of a high-dollar fundraiser for Dr. Oz in Englewood, NJ last week.  The second, organized by the Armenian Youth Federation Western U.S. (AYF-WUS), took place on October 6th at the Lyon Air Museum in Santa Ana, where the AYF called on “the Dr. Oz for U.S. Senate Campaign to right its wrong, by fully and transparently recognizing the Armenian Genocide, and standing with the U.S. government in holding Turkey accountable for its atrocious crime.”

The Armenian National Committee of America (ANCA) national office, along with its Eastern U.S. regional and Pennsylvania local affiliates have teamed up with the Hellenic American Leadership Council (HALC) in running a grassroots campaign calling attention to Dr. Oz’s genocide denial.

In an op/ed in the Jerusalem Post, Rabbi Shmuley and Hamparian asked, “Will Dr. Mehmet Oz, a citizen of Turkey with reported ties to Turkish President Tayyip Recep Erdogan, clearly state that the Armenian Genocide occurred? The question is more than reasonable. It is essential in understanding the values he would bring to Congress.”

These concerns have been spotlighted in news coverage by NBC News, the New York Post, Forbes, Daily Wire, Daily Caller, Breitbart, Washington Times, among others.  A video spotlighting Dr. Oz’s Armenian Genocide denial  – posted by the ANCA and HALC and produced by the Really American PAC – went viral with over 1.8 million views on Twitter. The ANCA has also called for a US Department of Justice investigation into whether Oz may be in violation of the Foreign Agent Registration Act (FARA) of 1938 for his endorsement agreement with Istanbul-based Turkish Airlines, through which Oz provides “consulting services, certain media, and in-flight film appearances.”

ANC of Pennsylvania co-chair Nora Kzirian explained, that the organization “has expressed its concerns over Oz’s candidacy from the very beginning. Deeper ties to the Turkish government and its interests are uncovered every day. Pennsylvanians deserve a senator who will represent our interests – not those of dictator Recep Erdogan,” explained.  Fellow co-chair Karine Shamlian concurred, telling NBC News, “We feel that this Senate seat is in jeopardy of being controlled by a foreign government, quite honestly.” The U.S. Senate unanimously recognized the Armenian Genocide in December, 2019, following near-unanimous reaffirmation of the crime by the U.S. House just weeks prior.  President Joe Biden officially recognized the Armenian Genocide on April 24, 2021, ending the longest-running gag rule on proper U.S. commemoration of this crime.  Pennsylvania first recognized the Armenian Genocide in a proclamation issued by Governor William W. Scranton on April 24, 1965.