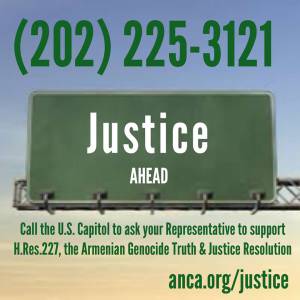 The Armenian National Committee of America- Western Region (ANCA-WR) has been hard at work discussing and promoting the new, groundbreaking Armenian Genocide Truth and Justice Act (H.Res. 227). As a result, Armenian-Americans across the country have been calling on their members of congress to join in support of H.Res 227. The Resolution, Introduced by Rep. Adam Schiff (D-CA), Rep. David Valadao (R-CA), Rep. Michael Grimm (R-NY), and Rep. Frank Pallone (D-NJ), calls on President Barack Obama to shed light on the United States record on the Armenian Genocide.

This new resolution, unlike previous resolutions, asks for the Obama Administration to acknowledge the United States record of the first genocide of the 20th century, as a precursor to fostering better Turkish-Armenian Relations. The resolution also highlights the past record of statements on the Armenian Genocide dating back all the way to the Wilson Administration. H.Res 227 already has a growing list of co-sponsors, because it calls on working towards lasting and durable Armenian-Turkish relations with the full and just recognition of the Armenian Genocide by Turkey.

“It’s a different approach to the age old question,” said ANCA WR Executive Director Elen Asatryan. “There needs to be a just acknowledgement of the Armenian Genocide by the Obama Administration. Without a clear and just resolution to the Mass murder of 1.5 million Armenians, a lasting peace between the Turkish and Armenian people is near impossible.”

The ANCA-WR asks that you contact your member of Congress, and urge them to support H.Res 227. For more information, please visit http://anca.org/justice/.

Calling on the President to work toward equitable, constructive, stable, and durable Armenian-Turkish relations based upon the Republic of Turkey’s full acknowledgment of the facts and ongoing consequences of the Armenian Genocide, and a fair, just, and comprehensive international resolution of this crime against humanity. [Click here to learn more]

The Armenian Genocide Truth and Justice Resolution represents a principled and practical approach, consistent with our nation’s moral stand against genocide, to advancing our nation’s interest in improved Armenian-Turkish relations through a truthful and just international resolution of this crime.

After years of failed efforts to appease Ankara, it’s time to try a new approach – an American approach – one that rejects foreign gag-rules, openly embraces the historical truth, and reflects our values as a nation:

** Consistent with our core America belief in freedom of expression, America should should reject any attempts by Ankara to impose a gag-rule on honest discourse about the Armenian Genocide.

** In pursuit of our national interest in improving ties between Armenians and Turks, respectful relations between Yerevan and Ankara, and a more tolerant and pluralist Turkey, U.S. diplomacy should press for an end to Turkey’s denial of the Armenian Genocide.

** Our longstanding U.S goal of constructive and sustainable relations between Armenians and Turks cannot be accomplished without overcoming Ankara’s denials, and justly and comprehensively addressing the modern-day consequences of the Armenian Genocide.

Whereas the Obama Administration has, since early 2009, sought to improve Armenian-Turkish relations through diplomatic efforts to lift the Republic of Turkey’s blockade of Armenia and facilitate an end to Ankara’s refusal to establish diplomatic relations with Yerevan; [Click here to learn more]

President Obama referenced this diplomatic effort in his April 24, 2009, statement. Read it here.

Whereas at the start of this process, President Barack Obama had, on April 6, 2009, voiced the United States Government’s expectation that Armenia-Turkey dialogue would `bear fruit very quickly’, but that, since then, the Obama Administration has commended Armenia’s participation in this dialogue while holding Turkey largely responsible for the lack of results from this process, with the Secretary of State noting, on June 4, 2012, that, on this matter, `the ball remains in Turkey’s court.’; [Click here to learn more]

President’s Obama’s April 6, 2009 remarks were made during a press availability in Ankara, Turkey. Read them here

Secretary Clinton’s June 4, 2012 statement was made in Yerevan, Armenia, during an appearance with Armenia’s Foreign Minister. Read it here

Whereas on April 24, 2013, President Barack Obama stated, `A full, frank, and just acknowledgment of the facts is in all of our interests. Nations grow stronger by acknowledging and reckoning with painful elements of the past, thereby building a foundation for a more just and tolerant future.’; [Click here to learn more]

President Obama’s April 24, 2013 statement was issued by the White House and posted on its website. Read it here.

Whereas the Republic of Turkey, rather than acknowledging and reckoning with painful elements of the past, has escalated its international campaign of Armenian Genocide denial, maintained its blockade of Armenia, and increased its pressure on the small but growing Turkish civil society movement acknowledging the Armenian Genocide and seeking justice for this systematic campaign of destruction of millions of Armenians, Greeks, Assyrians, Pontians, Syriacs, and other Christians upon their biblical-era homelands; [Click here to learn more]

Immediately after the Turkish and Armenian Foreign Ministers signed the Turkey-Armenia Protocols in August of 2009, Turkey publicly added additional pre-conditions requiring a pro-Azerbaijan settlement of Nagorno Karabakh prior to Ankara agreeing to end its blockade of Armenia.

In the years since the signing of the Protocols, Turkey has escalated its campaign of Armenian Genocide denial:

**On recent April 24ths, the day of Armenian Genocide remembrance, genocide deniers have organized rallies in front of the Turkish Embassy to mock and ridicule Armenian holding vigils for their lost relatives. Those taking part in these celebrations have been welcomed into the Embassy after their protests. Watch the Youtube Video from these celebrations from 2010 and 2011.

** In recent years, the Turkish government has begun officially and aggressively protesting the U.S. President’s April 24th statements, even though they fall short of using the term “genocide,” as part of an effort to roll back any U.S. recognition of massacres, deportations, etc. Read coverage of their remarks here.

** The Prime Minister of Turkey ordered the demolition of a recently erected Armenia-Turkey friendship statue. Read about it here and watch video coverage here.

** The Turkish Interior Minister Idris Naim Sahin participated in a February 2012 mass protest against Armenians in Istanbul, in which many prominently displayed signs proclaimed: “You are all Armenians. You are all bastards.” Read about it here.

Turkey has actually increased pressure on the small but growing Turkish civil society movement acknowledging the Armenian Genocide and seeking justice for this crime.

** Today’s Zaman, a major Turkish newspaper, recently fired Hasan Cemal, the grandson of Cemal Pasha (one of the three primary architects of the genocide), after he wrote a book dealing honestly with the Armenian Genocide.

** The Turkish government continues maintain Article 301 of its criminal code, which outlaws free expression on the Armenian Genocide. It has prosecuted many high-profile citizens, including Nobel prize winner Orhan Pamuk, and the late Hrant Dink.

Whereas the United States is on record as having officially recognized the Armenian Genocide, in the United States Government’s May 28, 1951, written statement to the International Court of Justice regarding the Convention on the Prevention and Punishment of the Crime of Genocide, through President Ronald Reagan’s April 22, 1981, Proclamation No. 4838, and by Congressional legislation, including House Joint Resolution 148 adopted on April 8, 1975, and House Joint Resolution 247 adopted on September 10, 1984; [Click here to learn more]

The U.S. government’s May 28, 1951, written statement to the ICJ is available via this official ICJ link. Read it here. It states in part:

“The Genocide Convention resulted from the inhuman and barbarous practices which prevailed in certain countries prior to and during World War II, when entire religious, racial and national minority groups were threatened with and subjected to deliberate extermination. The practice of genocide has occurred throughout human history. The Roman persecution of the Christians, the Turkish massacres of Armenians, the extermination of millions of Jews and Poles by the Nazis are outstanding examples of the crime of genocide.”

House Joint Resolution 148, adopted on April 8, 1975, designated April 24, 1975, as “National Day of Remembrance of Man’s Inhumanity to Man,” citing “all the victims of genocide, especially those of Armenian ancestry who succumbed to the genocide perpetrated in 1915.”

House Joint Resolution 247, adopted on September 10, 1984, designated April 24, 1985, as “National Day of Remembrance of Man’s Inhumanity to Man,” citing “all the victims of genocide, especially the one and one-half million people of Armenian ancestry who were the victims of the genocide perpetrated in Turkey between 1915 and 1923.”

Whereas even prior to the Convention on the Prevention and Punishment of the Crime of Genocide, the United States has a record of having sought to justly and constructively address the consequences of the Ottoman Empire’s intentional destruction of the Armenian people, including through Senate Concurrent Resolution 12 adopted on February 9, 1916, Senate Resolution 359 adopted on May 11, 1920, and President Woodrow Wilson’s Decision of the President of the United States of America Respecting the Frontier between Turkey and Armenia, Access for Armenia to the Sea, and the Demilitarization of Turkish Territory Adjacent to the Armenian Frontier, dated November 22, 1920; [Click here to learn more]

Senate Concurrent Resolution 12, adopted on February 9, 1916, called upon the President to “designate a day on which the citizens of this country may give expression to their sympathy by contributing to the funds now being raised for the relief of the Armenians in the belligerent countries.”

Senate Resolution 359, adopted on May 11, 1920, found that, “the testimony adduced at the hearing conducted by the subcommittee of the Senate Committee on Foreign Relations have clearly established the truth of the reported massacres and other atrocities from which the Armenian people have suffered,” and resolved that, “the Senate of the United States hereby expresses the hope that stable government, proper protection of individual liberties and rights, and the full realization of nationalistic aspirations may soon be attained by the Armenian people.”

The full text of President Wilson’s decision is available via Cornell University and also on the ANCA website.

President Obama’s January 19, 2008 statement and his full U.S. Senate and campaign record on Armenian issues are available on the ANCA Website here.

Whereas the United States national interests in the establishment of equitable, constructive, stable, and durable relations between Armenians and Turks cannot be meaningfully advanced by circumventing or otherwise seeking to avoid materially addressing the central political, legal, security, and moral issue between these two nations, Turkey’s denial of truth and justice for the Armenian Genocide:

Now, therefore, be it Resolved, That the House of Representatives calls on the President to work toward equitable, constructive, stable, and durable Armenian-Turkish relations based upon the Republic of Turkey’s full acknowledgment of the facts and ongoing consequences of the Armenian Genocide, and a fair, just, and comprehensive international resolution of this crime against humanity.