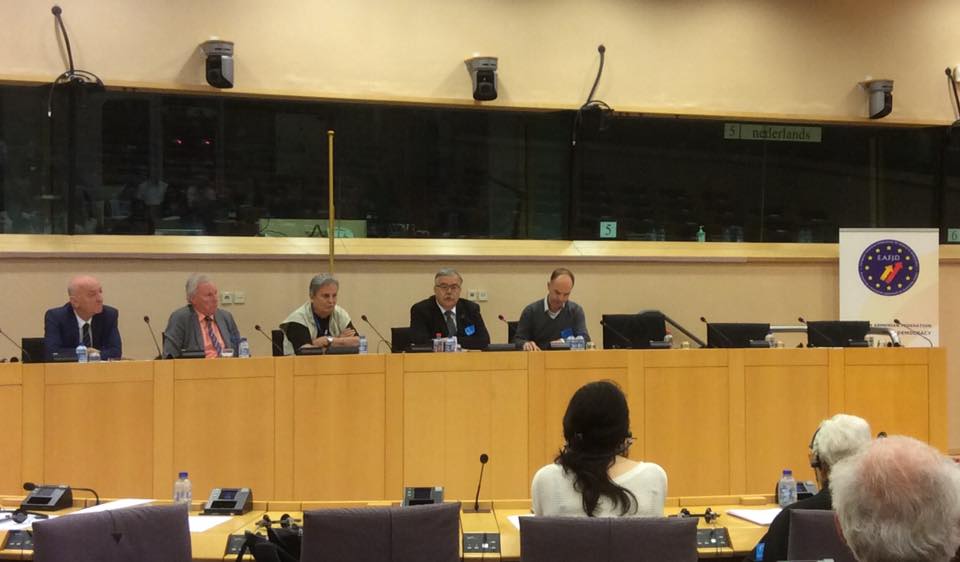 Invited panelists to this conference were Cem Sofuoglu, Turkish human rights lawyer and local counsel, leading the lawsuit of the Catholicosate of Cilicia against the Turkish government, which seeks the return of the historic seat of the Catholicosate, located in Sis (currently Kozan), Dr. Ove Bring, Professor Emeritus of International Law, Stockholm University and the Swedish Defence University, Mr. Dogan Ozguden, Turkish journalist and publisher and Mr. Guillaume Perrier, French journalist and author, who was the correspondent of “Le Monde” in Istanbul, in the years 2004 – 2014. The moderator was Mr. Hagop Der Khatchadourian, Chairman of the Armenian National Committee-International.

After the opening remarks made by the President of EAFJD, Mr. Kaspar Karampetian, MEP Dr. Charles Tannock, H.E. Mr. Tatoul Markarian, Head of Mission of the Republic of Armenia to the European Union, and the moderator H. Der Khatchadourian, Mr. Dogan Ozguden was honored by the EAFJD for his lifelong dedication and fight for Democracy, Human Rights, Truth and Justice.

Mr. Sofuoglu made the opening of the conference. He analyzed the legal case that he’s leading against the Turkish government, and urged the descendants of the victims of the Armenian Genocide to sue the Turkish government for the return of the expropriated property. He also stressed that Turkey needs at least, to implement its obligations of the Lausanne treaty, in respect to the minorities and their rights. Mr. Ove Bring said that economic compensation or restitution is possible today with regard to illegally taken real estate property, and that the European Court of Human Rights in Strasbourg could handle such issues; he also urged Turkey to follow the example of Germany, which totally broke its relation with its Nazi past and moved forward, something that Turkey is denying to do so.

In his turn, Mr. Ozguden talked about the current situation in Turkey and Turkish president Erdogan’s authoritarian regime regarding all aspects of life in Turkey today. He also analyzed the current Turkish Diaspora’s mindset, and the rejection of integration, which leads to denying the reality of the Armenian Genocide. Mr. Perrier analyzed today’s Turkish politics, and stressed that the current Turkish identity is based on the denial of the other, the other being the Armenians and the rest of the minorities.

After the presentations, the attendees had the opportunity to ask questions to the panelists and elaborate more on the themes discussed.

Kaspar Karampetian, President of European Armenian Federation thanked the panelists, MEP Tannock and participants for this very important event. He said “the issue of the Armenian Genocide recognition is a well established fact for us. After the centenary of the Genocide, we are focusing our efforts on the just reparations, restitution by legal means for our people. Today in the European Parliament some very serious issues were raised and recommendations given by our panelists, which we will take into consideration for our next moves. The Armenian Genocide is a perpetual crime, and crimes must be punished with all legal means” said Karampetian, and concluded.