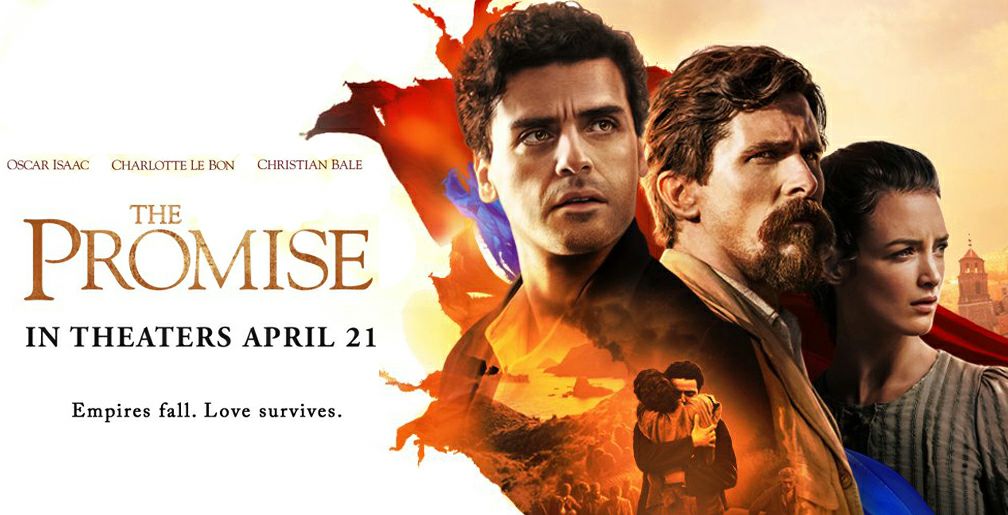 (ctvnews.ca) “The Promise,” a new Hollywood drama starring Oscar Isaac and Christian Bale, hasn’t even been widely released yet, but that hasn’t stopped thousands of people from denouncing it with poor online ratings.

According to Sevag Belian, the executive director of the Armenian National Committee of Canada, that’s because the love story set in the time of mass killings of Armenians during the First World War, has become the target of a “politically motivated campaign.”

“It’s preposterous and ridiculous to say the least,” Belian told CTV News Channel on Thursday, a day before “The Promise” opens in theatres across North America.

The movie premiered at the Toronto Film Festival last fall, but has only been screened a handful of times since then. Nevertheless, more than 126,000 people have rated it on IMDb, where it now has 5.4 stars out of 10.

The intense online reaction is fuelled by people who deny that 1.5 million Armenians were massacred during the First World War by the Ottoman Empire, parts of which formed modern-day Turkey.

Although numerous countries, including Canada, have formally acknowledged the mass killings as genocide, Turkey has refused to do so. The Turkish government maintains that Armenians were not targeted and that victims were collateral damage.

“The fact that thousands of people have surged onto the internet to write negative reviews about a film that they haven’t even seen is a clear indication that this is a politically motivated campaign,” Belian said.

“It’s unfortunately the result of years and years of denial of this atrocity by the Turkish government…Turkey, unfortunately, has not been ready to face its own history.”

Further fuelling the controversy was the March release of another movie that looks very similar to “The Promise.” Starring Ben Kingsley and Josh Hartnett, “The Ottoman Lieutenant” was made by Turkish producers and it highlights Turkey’s version of what happened during the First World War.

The makers of “The Promise” accused “The Ottoman Lieutenant” producers of trying to confuse the two movies.

“The Promise” was financed by the late American-Armenian billionaire investor Kirk Kerkorian. Numerous Hollywood actors, as well as high-profile athletes and artistsincluding Cher, Kim Kardashian, Sylvester Stallone and Elton John have expressed their support for the film.

With files from The Associated Press

‘The Promise’ weathers a political maelstrom before film opens on Friday

(cp24.com) A new film exploring the Armenian Genocide debuts on the big-screen this Friday, but the Hollywood blockbuster is already in a political maelstrom before it even opens in theatres.

“The Promise” has been praised by critics as the grandest portrayal ever made about the mass killings of millions of Armenians by the Turks during World War I.

Even though the film hasn’t officially opened in theatres worldwide, thousands of IMDb users, many of which are in Turkey, have flocked to the movie review website to rate “The Promise.”

But the ratings have nothing to do with the quality of the film, rather an attempt to discredit the movie along with the Armenian Genocide, the Armenian National Committee of Canada says.

“The simple fact that thousands of people have written such reviews before even viewing the movie is a clear indication that this is a part of a politically motivated campaign to make sure the wider public stays uninformed about the events of 1915,” Sevag Belian, executive director of the Armenian National Committee of Canada told CP24 on Wednesday.

One reviewer called onur-exe on IMDb said the movie a “good waste of Christian Bale and Oscar Isaac’s tremendous acting abilities,” while another identified as ecemipekli referred to it as “propaganda material.”

“You should get the basic idea that this movie is purely propaganda material looking at who has premiered it (Amal Clooney, an overpaid, so-called human rights lawyer financed by the Armenian lobbyists),” ecemipekli said.

The film currently has a total rating of 5.3 out of 10 stars.

The $100-million movie starring Oscar-recognized talents, such as Oscar Isaac, who stars as an Armenian medical student, and Christian Bale who portrays an American journalist, has provoked those who deny an estimated 1.5 million Armenians were massacred between 1915 and 1923 by the Ottoman Empire or that the deaths of Armenians were the result of a policy of genocide.

Though many countries and most historians call the mass killings genocide, Turkey has aggressively refused that label.

“This campaign is not only disrespectful to the descendants of the Armenian Genocide, but also highly unreflective of our shared values of respect, tolerance and regard to human rights in Canada,” Belian added.

The film was screened at the Toronto International Film Festival this fall.

Terry George, the Irish filmmaker behind “The Promise” told reporters then that “anytime the Armenian Genocide is mentioned, whether it is the centenary or a film like this, there is immediately a barrage of denial.”

“For me and for the world, to face this, it’s not a question of did it happen, or if it happened, the vast majority of historical study has firmly established that this is a planned attempt to wipe out the Armenian nation,” George added. “We need to get beyond that diversionary discussion to why. Why did it happen? How do we move on from that? And, how do you reconcile these two nations again?”

But this discussion has proved more difficult to have.

“I’m not surprised that the Turkish community has tried to respond in some way,”Belian said.

He was able to watch the film last week as part of a private screening and discovered it contains a story that hits close to home for him.

One of the scenes depicts the Battle of Musa Dagh during the Armenian Genocide, a village where Belian’s grandparents are from and were when a fleet of Turkish soldiers arrived.

“It really showcased the atrocities endured by the Armenian people,” he said.

Belian’s grandparents were rescued by a French warship in 1915 and taken to Egypt where they lived as refugees for the next four years before France claimed this area of southern Turkey.

A few of “The Promise’s” cast are of Armenian descent, including Armenian actress Angela Sarafyan who plays a love interest in the film.

“I’m a result of survivors of the Armenian genocide,” Sarafyan told reports during TIFF. “When I read the script, which is something for Armenians that we’ve heard since we were little, I felt this story was incredibly pertinent and incredibly important to me.”

Canada was among the first countries to recognize the genocide, in 2004.

The film also premieres during Genocide Awareness and Prevention Month in Canada as part of the federal government’s motion on the centennial anniversary of the Armenian Genocide.

“I think the best thing that ‘The Promise’ will be doing now is to challenge denial,” Belian said.