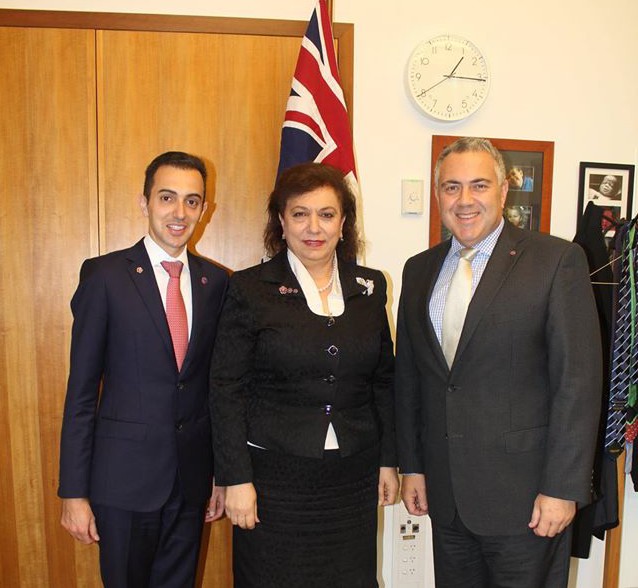 CANBERRA: The Armenian Genocide Centenary Commemorative “Forget Me Not” Pin was ever-present in the Australian Parliament’s House of Representatives during Question Time on Tuesday, as a result of meetings between the Republic of Armenia’s Diaspora Minister, Hranush Hakobyan and several Australian parliamentarians.

The Armenian National Committee of Australia (ANC Australia) joined Hakobyan – who is visiting Australia as the Special Envoy of the President of the Republic of Armenia – for high-level meetings in Canberra on Tuesday, 24 March 2015.

Among the meetings was one with the Treasurer of the Commonwealth of Australia, the Hon. Joe Hockey MP, who was then among a group of MPs who wore the “Forget Me Not” Armenian Genocide Centenary pin in Parliament for Question Time – the pins were a gift from Mrs. Hakobyan. Minister Hakobyan was acknowledged by the Speaker of the House of Representatives during Question Time.

Minister Hakobyan, who was sent to Australia by the President of Armenia, Serzh Sargsyan to discuss Armenia-Australia relations and the upcoming Centenary of the Armenian Genocide, also met with the Parliamentary Secretary for Foreign Affairs and Trade, the Hon. Steve Ciobo MP, the Hon. Joel Fitzgibbon MP, the Hon. David Feeney MP, Ms. Michelle Rowland MP and Mr. John Alexander MP.

At the conclusion of Minister Hakobyan’s working visit to Canberra, ANC Australia’s Executive Director, Vache Kahramanian, remarked: “Minister Hakobyan’s visit to Canberra was highly productive and fruitful. Armenia-Australia relations are on a solid footing and we look forward to further enhancing the bi-lateral relations between both countries.”

Kahramanian added: “It was a moving tribute to the victims of the Armenian Genocide by the Treasurer of Australia when he, along with others, proudly wore the Forget Me Not pin in memory of the 1.5 million victims of this crime against humanity perpetrated by the Ottoman Turkish Empire, which Turkey continues to deny.”

Minister Hakobyan’s visit to Canberra comes after she brought her participation to the Armenian Festival, which was held on March 22 in Sydney’s Tumbalong Park, where over 10,000 people took part in a major event dedicated to the Centenary of the Armenian Genocide.