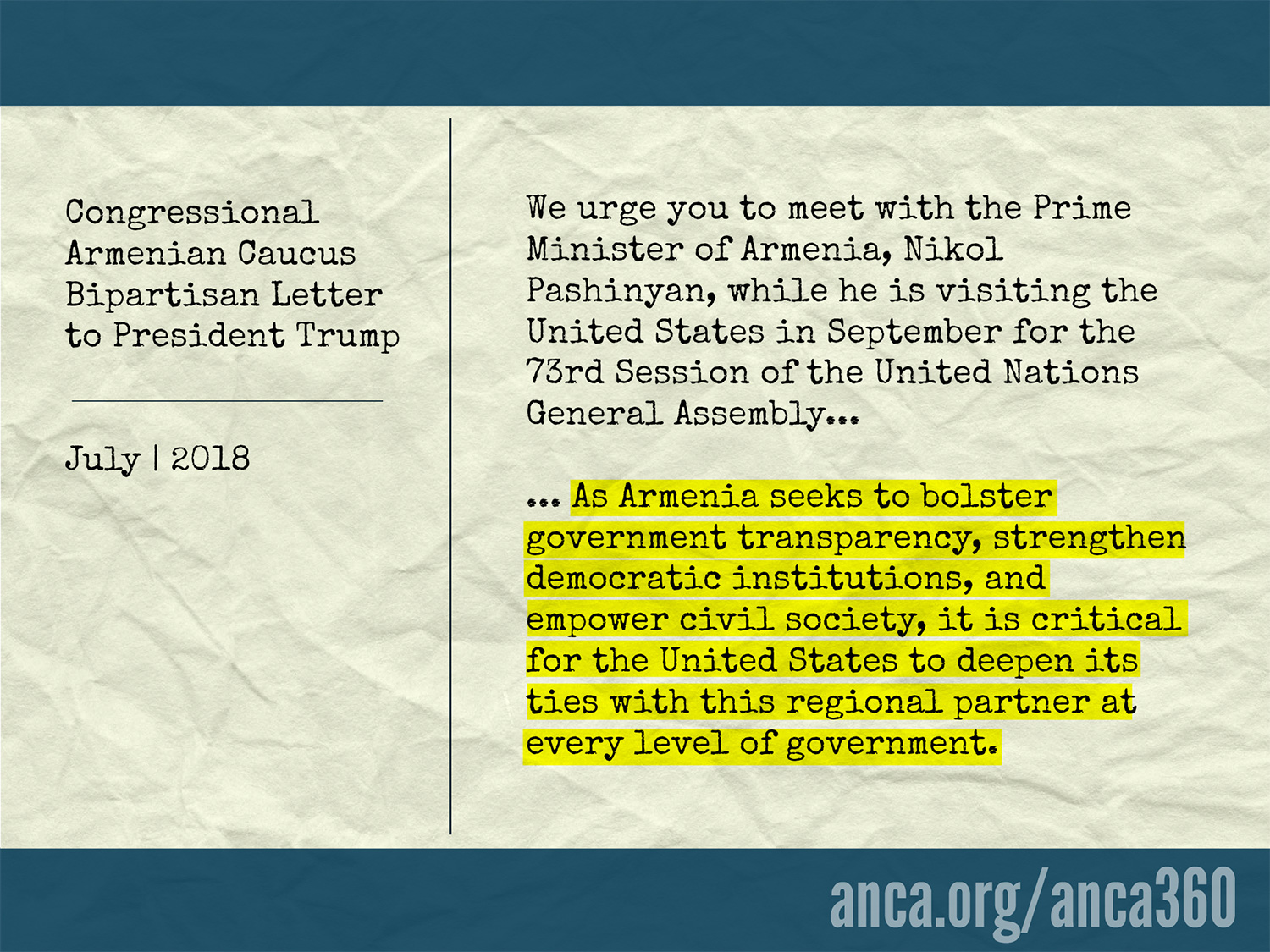 WASHINGTON, DC – The leaders of the Congressional Caucus on Armenian Issues are collecting the signatures of their U.S. House colleagues on a bipartisan letter encouraging President Donald Trump to meet with Armenia’s new Prime Minister Nikol Pashinyan during the United Nations summit in New York this September, as part of a broader expansion of U.S.-Armenian dialogue aimed at further integrating Armenia into the international economic system and increasing U.S.-Armenia bilateral trade and investment.
]

“We are encouraged by all the new opportunities for more robust U.S. cooperation with Armenia’s new government, and join with our Congressional friends in encouraging the Administration to pro-actively strengthen our bilateral ties – with a special focus on the sustainable growth of mutually-beneficial economic relations,” said ANCA Executive Director Aram Hamparian.

The ANCA’s U.S.-Armenia economic policy priorities include 1) a $140 million MCC Science, Technology, Engineering, Art, and Math grant for Armenia’s public schools, 2) a modern Tax Treaty to eliminate double taxation and promote financial transparency, 3) a Social Security Agreement to protect benefits earned by people who divide their careers between the U.S. and Armenia, 4) non-stop commercial and cargo flights from Los Angeles to Yerevan, and 5) maximizing the effectiveness of the existing Trade and Investment Framework Agreement Council and the U.S.-Armenia Economic Task Force.

The ANCA is also working with Armenian Caucus leadership and Congressional appropriators to expand FY2019 economic, military and refugee assistance to Armenia and demining, rehabilitation and peacekeeping assistance for Artsakh.

In a “Dear Colleague” letter to their Congressional colleagues, the Congressional Armenian Caucus Co-Chairs Frank Pallone (D-NJ), Jackie Speier (D-CA), Dave Trott (R-MI), and David Valadao (R-CA) and Vice-Chairs Gus Bilirakis (R-FL) and Adam Schiff (D-CA), wrote, “since being elected into office by Parliament, Prime Minister Pashinyan has committed himself to advancing Armenian issues both domestically and internationally and has stated his intent to deepen ties with the United States. Without question, a conversation between President Trump and Prime Minister Pashinyan emphasizing economic development, security and democracy is critical for a strong pivot towards a strategic partnership between our countries.”

The Armenian National Committee of America (ANCA) is encouraging U.S. Representatives to co-sign this bipartisan Armenian Caucus appeal to the President (full text provided below).

We urge you to meet with the Prime Minister of Armenia, Nikol Pashinyan, while he is visiting the United States in September for the 73rd Session of the United Nations General Assembly.

The Republic of Armenia has seen a remarkable change in its government through peaceful and democratic means over the past few months. As part of this movement, Mr. Pashinyan – a former newspaper editor and political prisoner – led tens of thousands of Armenians through the streets of Yerevan to protest former President and Prime Minister Sargsyan’s decade-long rule. Prior to being voted into his role as Prime Minister in May, Mr. Pashinyan organized this nonviolent grassroots movement known as the “Velvet Revolution,” which ultimately forced Mr. Sargsyan to resign.

The peaceful transition of power after the revolution is a clear indication of the will of the Armenian people, strongly demonstrating their commitment to a fairer and more democratic state. As Armenia seeks to bolster government transparency, strengthen democratic institutions, and empower civil society, it is critical for the United States to deepen its ties with this regional partner at every level of government. Without question, your meeting with Prime Minister Pashinyan would help to further this goal and strengthen dialogue between our countries.

Additionally, we are requesting a series of high-level conversations between your Cabinet Secretaries and their counterparts in Armenia – many of whom have recently been appointed as members of the newly formed government. These meetings would help to establish a critical bridge between our countries, helping to further increase Armenia’s inclusion in the international system and likely leading to more comprehensive US-Armenian bilateral trade.

We believe that the peaceful protests witnessed during the Velvet Revolution can be a model for nations seeking democracy around the world. In the long run, we would like to see Armenia develop stronger diplomatic relations with our Western allies and progress as a democratic nation within Eurasia. We reiterate our request and urge you to meet with Prime Minister Pashinyan to discuss the future of Armenian-American relations based on our shared values emphasizing economic development, security, human rights and democracy.

We look forward to hearing from you regarding our request.