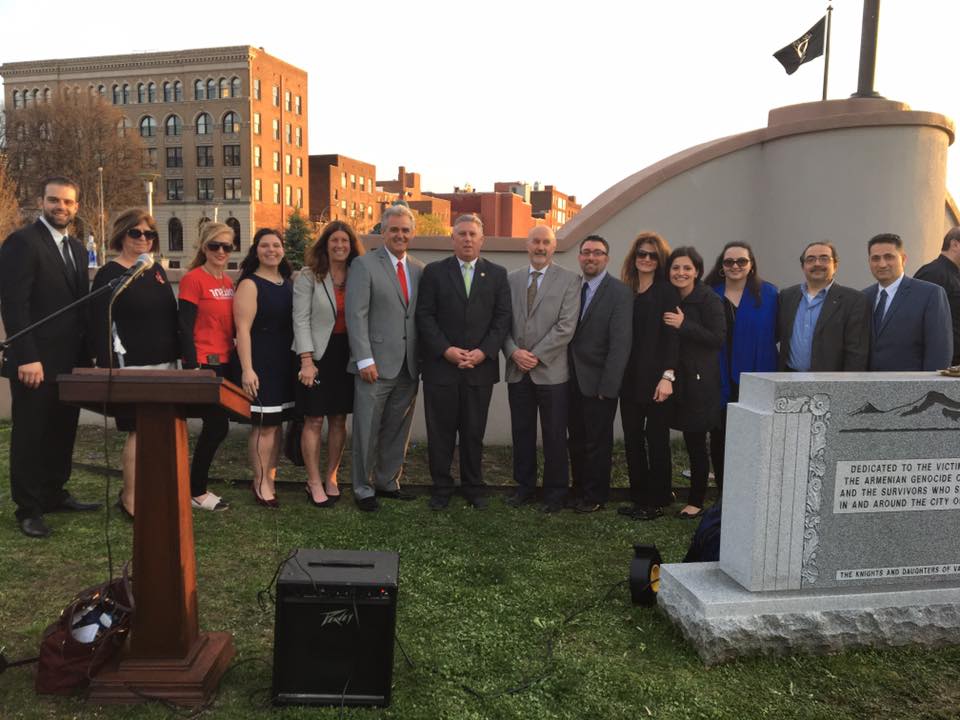 More than 100 Capital Region Armenians of all ages gathered near the near the Knights and Daughters of Vartan Genocide Monument in Riverfront Park to remember the plight of their ancestors during a ceremony hosted annually by the Armenian National Committee of Albany, Homenetmen of Albany and Knights and the Daughters of Vartan. Some wore red, blue and orange, the colors of the Armenian flag, while others sported shirts asking that the world “end the denial” of the genocide, which began in 1915 and resulted in the deaths of an estimated 1.5 million Armenians. Monday marked the 102nd anniversary of the beginning of the genocide.

“On April 24, Armenians around the world gather to mourn and remember the victims of the first genocide of the 20th century, perpetrated by the Ottoman Turkish government,” the event’s host Hagop “Jack” Minassian explained.

Ancestors continue an ongoing battle to recognize the genocide, which has been denied by some for more than a century.

“These are our ancestral bloods that were shed, our hard-working and earned lands that were stolen,” said Antranig Karageozian of the Armenian National Committee of Albany. “The denial of the Armenian Genocide has opened the doors for others. We must stop the denial so that history does not repeat itself.”

Karageozian also encourgaed thos in attendance to see recently released movie The Promise, which tells the story of the slaughter.

“We promise not to forget,” Karageozian said.

“The Armenians survived. The Turks lost. That is our revenge,” Levon Eledjian of the Homenetmen of Albany, to applause from the crowd.

Monday’s commemoration also included musical and religious components. Two years ago, on the 100th anniversary of the genocide, the victims were consecrated as saints by the Armenian Apostolic Church.

“So now, we do a special service for them as holy martyrs, as saints of the Armenian Genocide,” explained the Rev. Stepanos Doudoukjian of St. Peter Armenian Apostolic Church in Watervliet. “That’s given a new life to this sad day, a new hope, a new life, a new holiness found in death.

“We need to periodically reflect on these genocides,” said Troy Mayor Patrick Madden, who proclaimed April 24 as Armenian Genocide Remembrance Day in the city of Troy.

“It’s incumbent upon all of us to continue to shine a light on this and never let the world forget,” McLaughlin added.