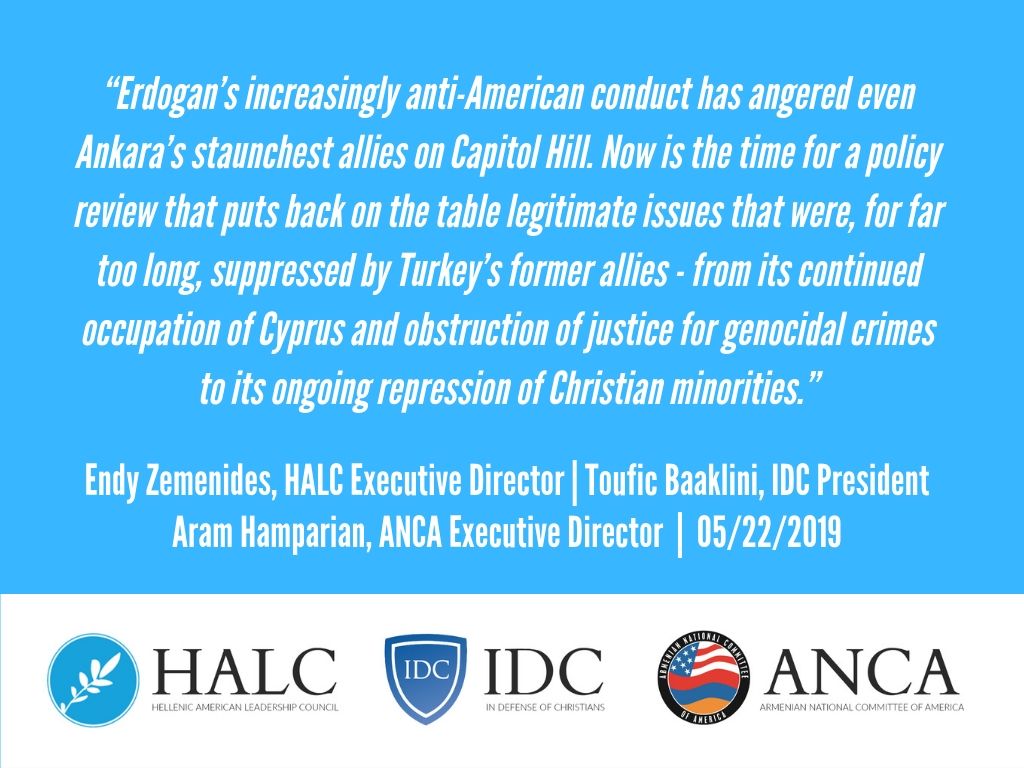 The Hellenic American Leadership Council (HALC), In Defense of Christians (IDC), and ANCA welcomed the House Foreign Affairs Committee decision. “Erdogan’s increasingly anti-American conduct has angered even Ankara’s staunchest allies on Capitol Hill,” said HALC Executive Director Endy Zemenides, IDC President Toufic Baaklini, and ANCA Executive Director Aram Hamparian, in a joint statement. “Now is the time for a policy review that puts back on the table legitimate issues that were, for far too long, suppressed by Turkey’s former allies – from its continued occupation of Cyprus and obstruction of justice for genocidal crimes to its ongoing repression of Christian minorities.”

“Turkey’s impending purchase of the S-400 anti-aircraft system from Russia is very damaging for the U.S.-Turkey relationship,” Rep. Chabot told Committee members during today’s consideration of H.Res.372, calling the purchase “totally unacceptable” for the U.S.

Rep. Wilson concurred, calling the S-400’s purchase “damaging and dangerous” and “indicative of the current government’s disdain for our shared values and Turkey’s democratic foundations.”  Rep. Wilson  went on to note that “the fact that they [Turkey] are now considering collaborating with the Russians on a new S-500 system just confirms this to me and others.”

House Foreign Affairs Committee Chairman Eliot Engel (D-NY), who authored H.Res.372, was blunt in his remarks.  “President Erdogan has tightened his grip on power and rolled back democracy in Turkey. […]  Today’s resolution condemns Erdogan for his authoritarian behavior and calls on Turkey to cancel delivery of the Russian weapons system.”

Ranking Member Michael McCaul (R-TX), who joined Chairman Engel in spearheading the bi-partisan measure, said “the time is come to put Turkey on notice that if they purchase the S-400 system, Congress will no longer support their participation in the F-35 program.  We want to see Turkey make a course correction and make the better choice.” Rep. McCaul went on to note, “it is incomprehensible to me that Turkey, a NATO ally, would buy a Russian S-400 system.  This is not acceptable to this committee or to the Administration.”

Senior House Foreign Affairs Committee member Brad Sherman (D-CA) concurred. “We’re all concerned about Turkey,” said Rep. Sherman. “If they are cooperating with Russia with regard to an S-400 and, even worse, the development of an S-500 rocket – that is inconsistent with their partnership in NATO.”

H.Res.372 is one of several pieces of Senate and House legislation currently under consideration that would block the sale of some 100 F-35’s to Ankara and stop the future production of F-35 parts in Turkey.  The House Fiscal Year (FY) 2020 defense spending bill would restrict U.S. funding for the delivery of F-35’s to the Erdogan regime if the S-400 purchase moves forward.  The Senate version of the National Defense Authorization Act (NDAA) is said to also include restrictions on the pending F-35 sale.

Congressional Quarterly is reporting that efforts are already underway to find alternatives to Turkey manufacturing F-35 parts for European customers and Japan and others have expressed interest in purchasing the 100 F-35’s optioned by Turkey.