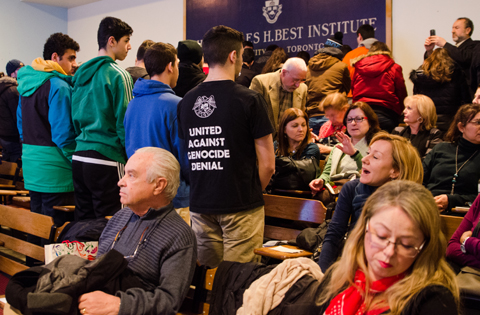 ANCC: Turkish Embassy Urges Support for Academic Freedom but Only in Canada

Ottawa – On February 25, 2015, the official email address of the Turkish Embassy in Ottawa circulated an email which called upon Turkish Canadians to sign a petition calling upon the University of Toronto to uphold academic freedom. The email was in response to a campaign by human rights activists to ask the University of Toronto to not provide a forum for well-known Armenian Genocide deniers Dr. Justin McCarthy and Mr. Bruce Fein.

The Armenian National Committee of Canada (ANCC) welcomes the Turkish government’s apparent about face on academic freedom. The ANCC anticipates that Turkey?s newly discovered appreciation for the rights of scholars will be reflected by the immediate dismantling of its Higher Education Board (YOK), which monitors the activities of university educators and prevents them from discussing topics under threat of losing their positions. The ANCC also expects that Turkish President Erdogan will apologize for demonizing academics in December 2012 when he stated academics should “teach students valuable information, like how to use a computer. I condemn all academics who support [student protesters at Middle East Technical University]. We do not need teachers like this.”