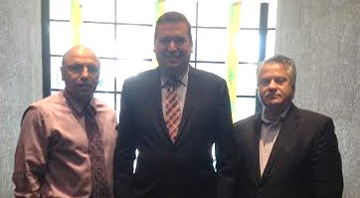 Together they discussed support for Syrian Armenian refugees, Iraq minorities, and refugees in Armenia and Artsakh .
The ANCC members suggested that Minister Paradis visit Armenia in the near future to see first hand the refugees there and also to support Armenia as a member of La Francophonie.

The Minister welcomed the invitation and said he would be willing to go on any occasion.

He introduced the ANCC to his Ministry’s Director of Policy and Stakeholder Relations Mr. Idee Inyangudor , to keep relations open with the ministry regarding our community’s
concerns .
On the same day representatives Andonian and Der Hagopian had a short meeting with Canadian Red Cross CEO Conrad Sauve and his Western Canada Communications Advisor Nathan Huculak.