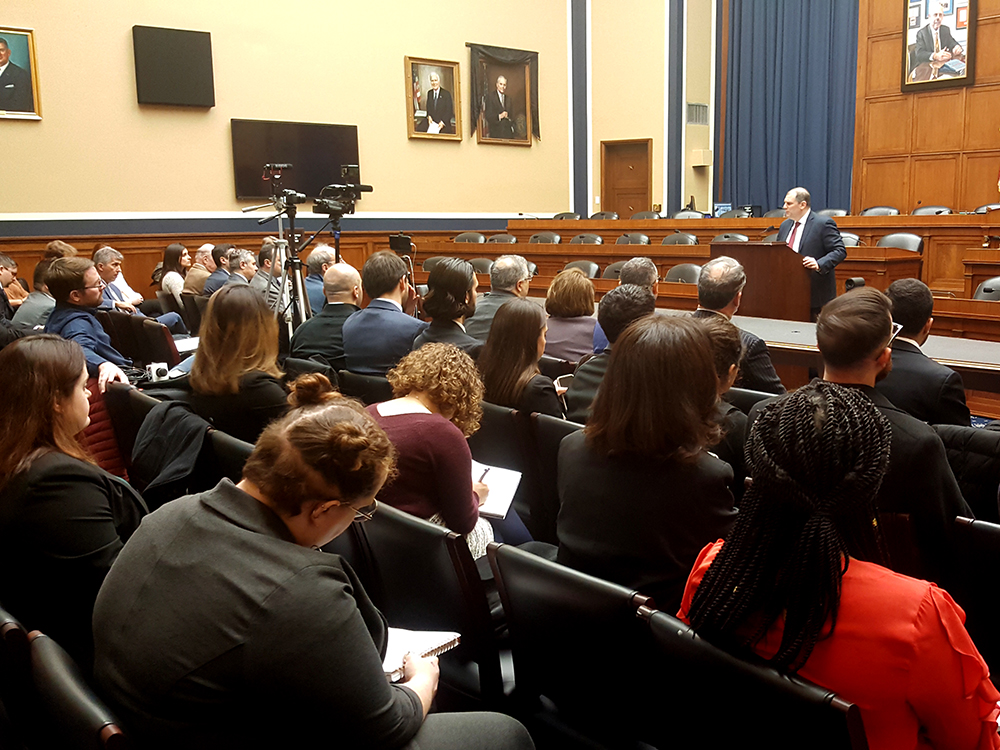 WASHINGTON, DC – Inspired by the recent adoption of the landmark Elie Wiesel Genocide and Atrocities Prevention Act, the Armenian National Committee of America (ANCA) launched the Raphael Lemkin Policy Series today with a lecture by Dr. Henry Theriault, President of the International Association of Genocide Scholars.  The series aims to foster an ongoing Capitol Hill conversation among legislative, civil society, academic, and other stakeholders about preventing and punishing genocide.

“It is wonderfully appropriate that this policy series is named for Raphael Lemkin, the man who first described the crime of genocide as a specific and distinct act, the effort to exterminate a whole people based on ethnicity, nationality, religion, or some other trait,” noted Congressman Adam Schiff (D-CA), who was today’s host.  “Raphael Lemkin did the world and the cause of fundamental human rights a great service in his work, and that is the work that we carry forth today in fighting for the full recognition of the Armenian Genocide. Only by confronting the truth of past genocides can we hope to respond to modern day mass violence.  Today’s lecture is an important step in that fight,” concluded Congressman Schiff. U.S. Representative John Sarbanes (D-MD), a leading member of both the Hellenic and Armenian caucuses was on hand to show his support.

ANCA Programs Director Tereza Yerimyan welcomed Congressional staff, representatives of the Embassy of Armenia, Republic of Artsakh Representative, His Excellency Robert Avetisyan, former U.S. Ambassador to Armenia John Evans, Genocide Watch Founder and President Dr. Greg Stanton, Raphael Lemkin expert Jim Fussell, In Defense of Christians President Toufic Baaklini, and Greater Washington DC area human rights supporters to the lecture.  “In the wake of Congress passing and the President signing into law, the Elie Wiesel Genocide and Atrocities Prevention Act of 2018, a measure that states that it is U.S. policy to regard the prevention of genocide and other atrocity crimes as a core national security interest and a core moral responsibility, we see signs of progress, but also the need for more serious conversations on Capitol Hill about the prevention and punishment of genocide,” explained Yerimyan.  “Today, we look to begin that conversation, with Dr. Henry Theriault, President of the International Association of Genocide Scholars (IAGS) and Associate Vice President for Academic Affairs at Worcester State University.”

“We do have a challenge. The world is very different from Lemkin’s time (who died in 1959), and yet, genocide is still a fundamental, incessant problem that we face.  ‘Never again’ really seems to mean ‘ever again,’” began Dr. Theriault, who noted that there has been a steady stream of genocides which have occurred from the 19th century all the way through to the 21st Century.  “But Lemkin, if there is one part of his legacy, in the midst of the darkest challenge, you find some things to hold on to, that are signs of progress.”  Dr. Theriault cited as progress the 1988 U.S. ratification of the United Nations Genocide Convention, the first prosecution of genocide in 1998, key interventions in Kosovo and East Timor, last year’s Congressional passage of the Eli Wiesel Genocide Prevention Act, and a number of transitional justice initiatives.

“There needs to be a legitimate, serious fundamental process for dealing with past mass violence that actually addresses the problems and, I would argue, includes a reparative process. That means the perpetrator group needs to give up the gains of the genocide and assume responsibility for helping to reconstitute the victim group as much as possible,” said Dr. Theriault, because, he stressed, without justice, “the message to other would-be perpetrators is absolutely clear: Genocide pays and you can just go on with it, and no one will do anything about it.”

Commenting on two instances of where U.S. policy helped stop genocide and sought to address genocide denial, Dr. Theriault first cited the efforts of former Senator Tom Harkin (D-IA), Senator Jack Reed (D-RI) and Congressman Jim McGovern (D-MA) who led efforts to stop the genocide in East Timor by ending support for and arms sales to the perpetrating regime in the early 1990’s.  Then, citing the ongoing U.S. policy of not properly referencing the Armenian Genocide, Dr. Theriault spotlighted the courage of former Ambassador to Armenia John Evans in making specific, accurate references to this crime, for which he paid the heavy political price of being recalled from office. “By saying a word [genocide], you can create an ethical challenge that wasn’t just about Armenians but was really about how the U.S. addresses the reality of mass violence.  It was the legacy of Morgenthau.  It was the moment where we used Lemkin’s word and in doing that, it brought about a change [. . .] — a moment where people actually felt that for the first time somebody was actually standing up to acknowledge the history in an official way.”

Dr. Theriault concluded, “The lesson of Lemkin that we can take is that we are in a position to do something about genocide.  It seems daunting.  It took Lemkin decades to get a law against genocide.  It took the world half a century to begin to deal with genocide.  These are lifetime commitments – but making that commitment and keeping that commitment […] maybe we will have a genocide-free world because of the things that people in this room are doing now.”

The Lemkin series is made possible by the ANCA Endowment Fund and the generosity of the Aramian Family – led by sisters Sue, the late Martha, and the late Margo – long-time benefactors of educational and charitable projects in the Armenian homeland and the diaspora.

The lecture was streamed live on the ANCA Facebook page and is available at: https://www.facebook.com/ancagrassroots/videos/372591410242823/