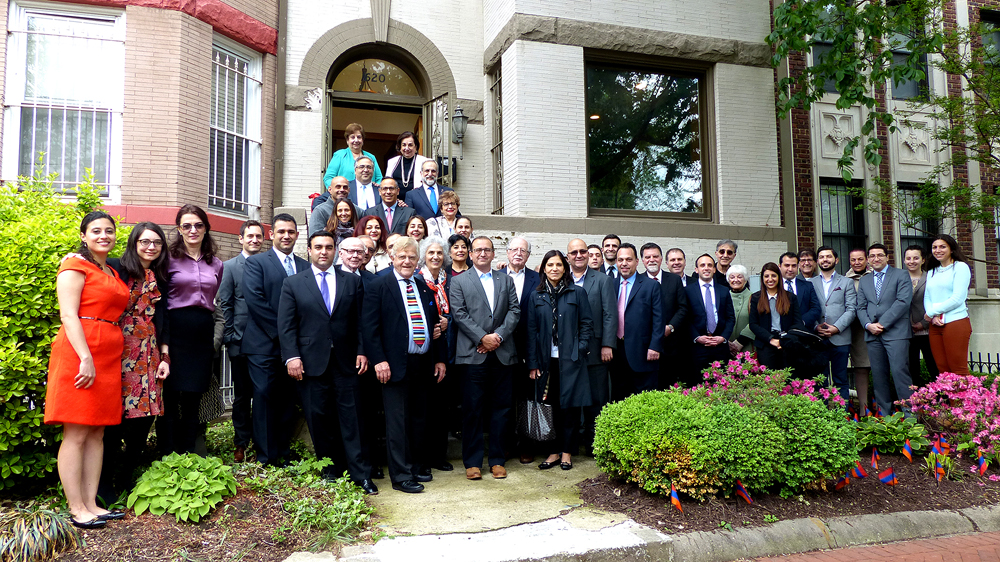 WASHINGTON, DC – Armenian National Committee of America (ANCA) leaders and supporters from across the United States joined with Armenian American public policy professionals for a weekend long celebration marking the opening of The Aramian House, a landmark property in downtown Washington, DC that serves as the new home and permanent headquarters for the ANCA’s signature youth initiatives – the Leo Sarkisian Summer Internship Program and the Hovig Apo Saghdejian Capital Gateway Program.

“The opening of ANCA’s Aramian House marks a major milestone,” said ANCA Chairman Raffi Hamparian. “This wonderful building is fresh proof of the ANCA’s unbending commitment to programs that benefit emerging leaders in our community – especially those in college and those who have recently graduated or completed an advanced degree. The ANCA’s doors, through both the Hovig Apo Saghdejian Capital Gateway Program and the Leo Sarkisian Program, are wide open for our future leaders to benefit from all the ANCA has to offer,” Hamparian added.

The purchase of The Aramian House was made possible through a generous donation by the family of the late community leader and philanthropist Martha Aramian of Providence, Rhode Island. The Aramian family – led by sisters Sue, Margo, and the late Martha – have long been among the most generous benefactors of ANCA programs as well as of charitable projects in the Armenian homeland and the Diaspora. Their parents, Kazar and Nevart, were Genocide survivors who came to this country and committed themselves and their daughters to remembering and honoring their heritage and culture. The family demonstrated that commitment as the prime donor to the ANCA’s Armenian Cause 2.0 Conference in 2011. They also provided support for the Aramian Conference Room, located on the fourth floor of the ANCA’s national headquarters, and numerous educational programs for young Armenian American women. The Aramians have also funded, in Martha’s name, a series of Capitol Hill programs on Armenian issues.

“Being supporters of the Gateway Program is a great privilege, as it has given us the opportunity to meet the best and brightest of Armenian American youth while they seek job opportunities in the nation’s capital,” said sisters Sue Aramian and Margo Aramian Ragan. “The Aramian House adds another dimension to the Program as its permanent residence. Presence is power, power is presence – the Gateway graduates bring that to the Armenian Cause.”

In moving remarks offered at the ribbon cutting ceremony inaugurating The Aramian House, Margo Aramian Ragan repeated family patriarch, Kazar’s, words, guiding the family’s ongoing commitment to community strengthening – “If not us, then who?” That same selfless devotion to youth development was shared by Nayiri Saghdejian, the sister of the late Hovig Apo Saghdejian, the youth leader in whose memory and honor the ANCA Capital Gateway Program is named. Ms. Saghdejian and her father, Apo, have served as the endowing angels of the program, raising over $250,000 in support of the initiative over the past decade.

“The Aramian House and our two youth programs symbolize the importance of our younger generations and the value that we put on their potential to advance the Armenian Cause in the future. They are the ANCA’s number one asset,” explained Nayiri Saghdejian.

The ribbon-cutting reception was complemented by a weekend of events in support of the ANCA’s youth development and broader Armenian American advocacy initiatives. Longtime supporters Dr. & Mrs. Hrant and Tina Semerjian opened their home to ANCA stalwarts who had traveled from across the United States to celebrate the new acquisition and to explore ways to expand the ANCA’s reach and success. Guests also visited with Armenian Ambassador to the United States, His Excellency Grigor Hovhannisyan, as part of a reception hosted at the Armenian Embassy, which featured a detailed political and electoral update by POLITICO’s Senior Politics Editor Charlie Mahtesian.

Throughout the weekend, Hovig Apo Saghdejian Capital Gateway Program Advisory Committee members and youth program alumni were on hand to offer first-hand insight into the success of the programs and the importance of expanding the ANCA’s youth-oriented programs.

“This property leverages our most powerful resource – our youth, by providing them with a professional platform from which they can – each and every day – realize their own dreams while expanding our community’s presence in one of the world’s great capitals,” said ANCA Legislative Affair Director Raffi Karakashian, Esq., who also serves as Hovig Apo Saghdejian Capital Gateway Program Director. “We have been blessed with alumni who have striven not only for personal achievement but to mentor and guide subsequent participants – a heartwarming reality which serves as the cornerstone of the programs’ success.”

Photos from The Aramian House opening and weekend events are available on the ANCA Facebook page.

The Aramian House: A New Home for Armenian Heritage

Located at 1620 T Street NW, in downtown Washington, DC’s Dupont Circle neighborhood, The Aramian House is a century-old, 4,000 sq. ft. Victorian-style brownstone, which was fully renovated as a bed and breakfast in 2006. The main house includes 6 bedrooms, 5.5 baths, 2 living rooms, a large dining room and 2 kitchens, and is connected by an enclosed passageway to a separate “carriage house,” with 2 bedrooms, 1.5 baths and a full living room and kitchen. Both the main building and carriage house overlook a courtyard. At full capacity, The Aramian House can serve up to 18 students and career seekers.

As community interest in its various leadership building and public policy career development programs grew, the ANCA had sought a permanent home for its youth programs, to ensure safe and consistent housing options for its participants and a sound investment of community resources. Previously, the ANCA housed interns and fellows at university dormitories and, later, at various rental properties in the nation’s capital.

An artistic vision of The Aramian House, placed within the landscape of the ANCA’s Washington DC initiatives, was shared by award-winning young artist Anahit Kanayan, a sophomore in the Visual Arts Department of the Duke Ellington School of Arts in Washington, DC. Her vibrant colored pencil drawing, unveiled at the ribbon-cutting ceremony, depicts The Aramian House as a platform for our community’s rising stars to enter Washington’s public policy world.

Launched in 2003, the ANCA Hovig Apo Saghdejian Capital Gateway Program (CGP) helps secure permanent employment and professional internships for young Armenian American professionals in Washington, DC. Through the years, the ANCA has developed many relationships in and around Capitol Hill and identified a wide range of opportunities in the Washington, DC area. The CGP utilizes these resources and contacts to help candidates identify and secure jobs that fit their interests and needs.

Established through a founding donation from the Cafesjian Family Foundation, the program is named after Hovig Apo Saghdejian, a beloved young community leader who lost his life in a tragic car accident and whose eternal memory continues to inspire new generations of Armenian Americans. His family generously established the Hovig Apo Saghdejian Memorial Fund in his memory and, over the past decade, have played a vital role in the expansion of the program. Substantial support has also been provided by longtime ANCA benefactors Mr. and Mrs. Frank and Barbara Hekimian and the Armenian American Veterans Post of Milford, Massachusetts (AAVO).

The ANCA Leo Sarkisian Summer Internship (ANCA-LSI) program, established in 1986, provides student leaders and activists an opportunity to participate in an eight week intensive program designed to give them the tools necessary to effectively advance issues of concern to the Armenian American community on the federal, state and local level. Named in memory of the late ANCA Eastern U.S. community leader who spearheaded grassroots activism to advance the Armenian Cause for more than four decades, the Leo Sarkisian program now has hundreds of alumni across the world, spreading the message of truth and justice for the Armenian Genocide, freedom for Artsakh, and a secure, prosperous, and democratic Armenian homeland.

Photo: ANCA leaders, friends and supporters with the Aramian and Saghdejian families at the opening of The Aramian House in Washington DC, which serves as the permanent home for the ANCA’s Hovig Apo Saghdejian Capital Gateway and Leo Sarkisian Internship Programs.