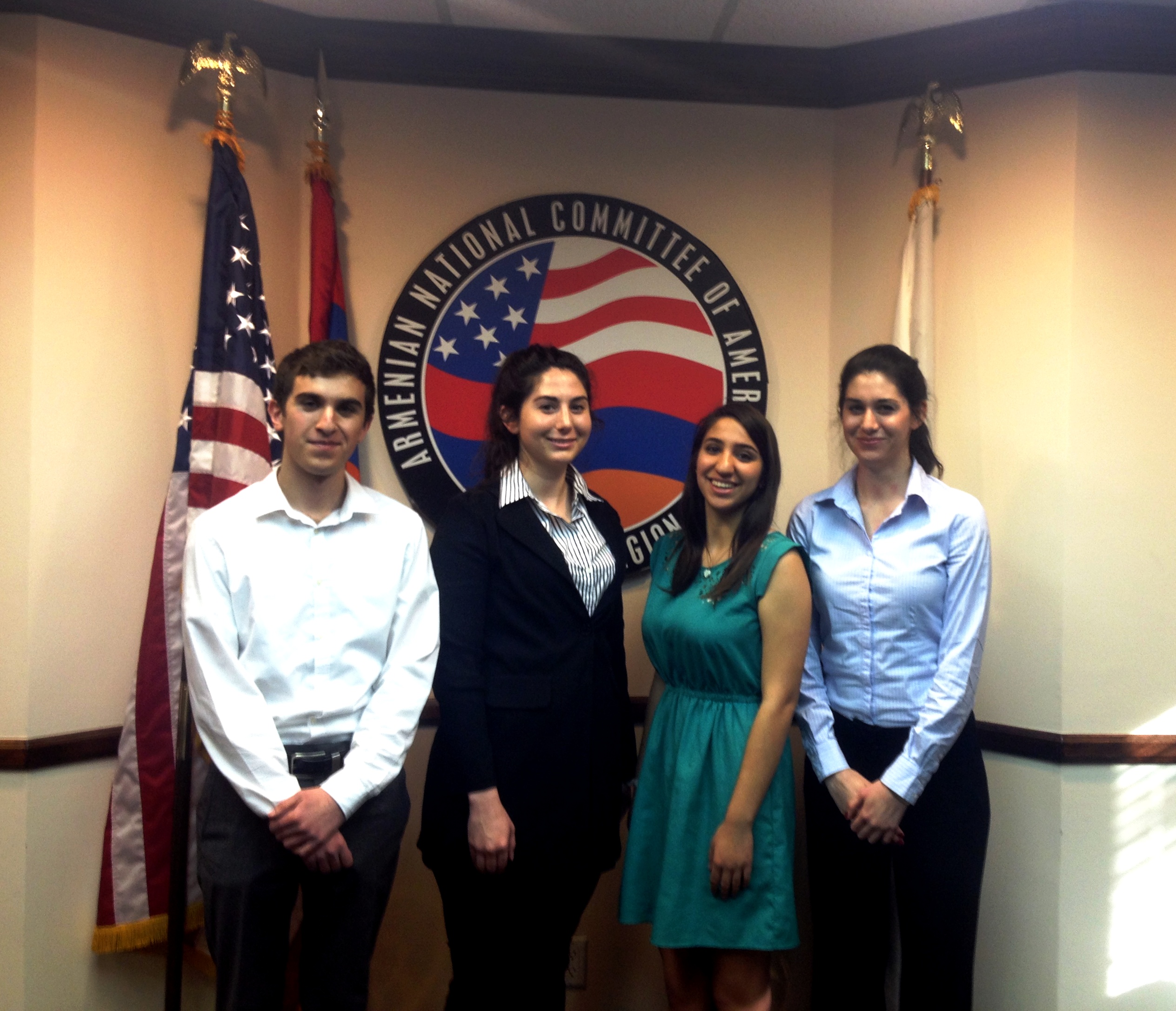 GLENDALE, CA – The Armenian National Committee of America Western Region (ANCA WR) announced, this week, its choice of four candidates to participate in the spring session of the prestigious ANCA Western Region Internship Program. Throughout the next 6 months, Mher Arabian, Garooneh Avanessian, Meagan Ovanesian, and Michelle Ovanesian will participate in an intensive lecture series while working on specific projects in areas ranging from legislative affairs and community education to media relations and grassroots mobilization.

“The Internship program provides Armenian American youth an invaluable opportunity to sharpen their community organizing skills, while learning first-hand about the inner workings of the American political system and gaining a real-time perspective on the Armenian Cause and its political and legislative future,” stated ANCA WR Executive Director, Elen Asatryan.

A pre-law student at Pasadena City College, Mher Arabian spent the past 8 years as a missionary in Armenia. He was inspired to apply to the internship program after volunteering and attending the unprecedented 2013 ANCA WR Grassroots Conference.

A senior at Crescenta Valley High School, Garooneh Avanessian is an active member of the Armenian Youth Federation and the Crescenta Valley Armenian Club. She also volunteers with AYSO and for the past 3 years has assisted the Glendale Rose Float Association.

Meagan Ovanesian is Religious Studies Major at Pierce College who has throughout the years volunteered for the Senior Concerns Bargain Boutique, KZV Armenian School, and St. Pascals Catholic Church. “I have always desired to find a way to get to know my heritage while at the same time giving back to my community. The ANCA WR Internship Program allows me the opportunity to do both by bringing culture and service for the Armenian community together,” stated Meagan Ovanesian. “I am thankful to have been given this opportunity through which I can get a better sense of government and organizational proceedings and be able to work on projects that will directly advance the Armenian Cause,” added Ovanesian.

Michelle Ovanesian is a graduate of UC Berkeley and most recently Georgetown University where she obtained her Master of Science Degree in Biochemistry and Molecular Biology. She has previously volunteered at the Potomac Institute for Policy Studies, School on Wheels, Inc., Children’s Hospital of Los Angeles, and the National Cancer Institute at the National Institutes of Health.

Established in summer 2006, the ANCA Western Region Internship Program is a selective part-time leadership program, which introduces high school seniors, college students, and recent college graduates to all aspects of the public affairs arena. The program provides an opportunity for student leaders and activists to gain an in-depth understanding of the American political system and Armenian-American issues and advocacy efforts on the local, state and federal levels.

The Armenian National Committee of America-Western Region is the largest Armenian American grassroots advocacy organization in the Western United States. Working in coordination with a network of offices, chapters, and supporters throughout the Western United States and affiliated organizations around the country, the ANCA-WR advances the concerns of the Armenian American community on a broad range of issues.