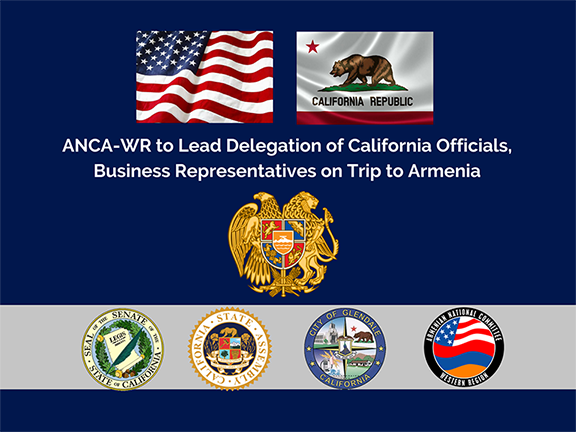 GLENDALE—The Armenian National Committee of America – Western Region announced that it will lead a delegation of prominent California elected officials and business representatives on a legislative trip and trade study project to meet with influential figures across Armenia’s political spectrum and with various IT centers. The visit is scheduled to take place from September 4, 2018 to September 13, 2018.
]

“An important part of the ANCA’s mission is to promote bilateral political and trade relations between the U.S. and Armenia. As the fifth largest economy in the world and as home to the largest organized community in the worldwide Armenian Diaspora, California plays a unique role in advancing this goal. We are gratified that such a distinguished group of state legislators, local elected officials and influential policy makers from the IT sector have accepted our invitation to join this important delegation, and as the New Armenia opens its doors for input and bilateral relations, we look forward to achieving tangible results which will mutually benefit both sides,” stated Nora Hovsepian, Chair of the ANCA-WR.


In an effort to be better acquainted with one another prior to the trip and to provide the delegation with an opportunity to discuss logistical details, ANCA-WR representatives traveled to Sacramento on August 13 for a pre-trip orientation. The meeting, filled with enthusiasm and excitement, also gave way for participants to review the 160-page packet that outlined a hefty itinerary for the visit filled with meetings with officials and historic site visits as well as background information on Armenia, Artsakh, the Armenian Genocide, current issues within the region, and its growing IT sector.

“I am very excited to be making my second trip to Armenia with the ANC, Glendale City Mayor Sinanyan and a terrific group of high tech business leaders from California. Expanding economic opportunity between California and Armenia is an important goal and starting with the high tech industry holds tremendous promise. It’s going to be a great trip and I am grateful to the ANC for its invitation to help make it happen,” stated Senator Portantino.

“I am thankful for the opportunity to be part of a delegation that will bring together California legislators and Tech companies with those in Armenia. Senator Portantino’s Select Committee on California, Armenia and Artsakh Mutual Trade, Art and Cultural Exchange is bearing fruit as is demonstrated by the strong interest in this delegation and closer cooperation between the sides,” noted Glendale City Mayor Zareh Sinanyan.

The Armenian National Committee of America – Western Region is the largest and most influential Armenian-American grassroots advocacy organization in the western United States. Working in coordination with a network of offices, chapters, and supporters throughout the western United States and affiliated organizations around the country, the ANCA-WR advances the concerns of the Armenian-American community on a broad range of issues.