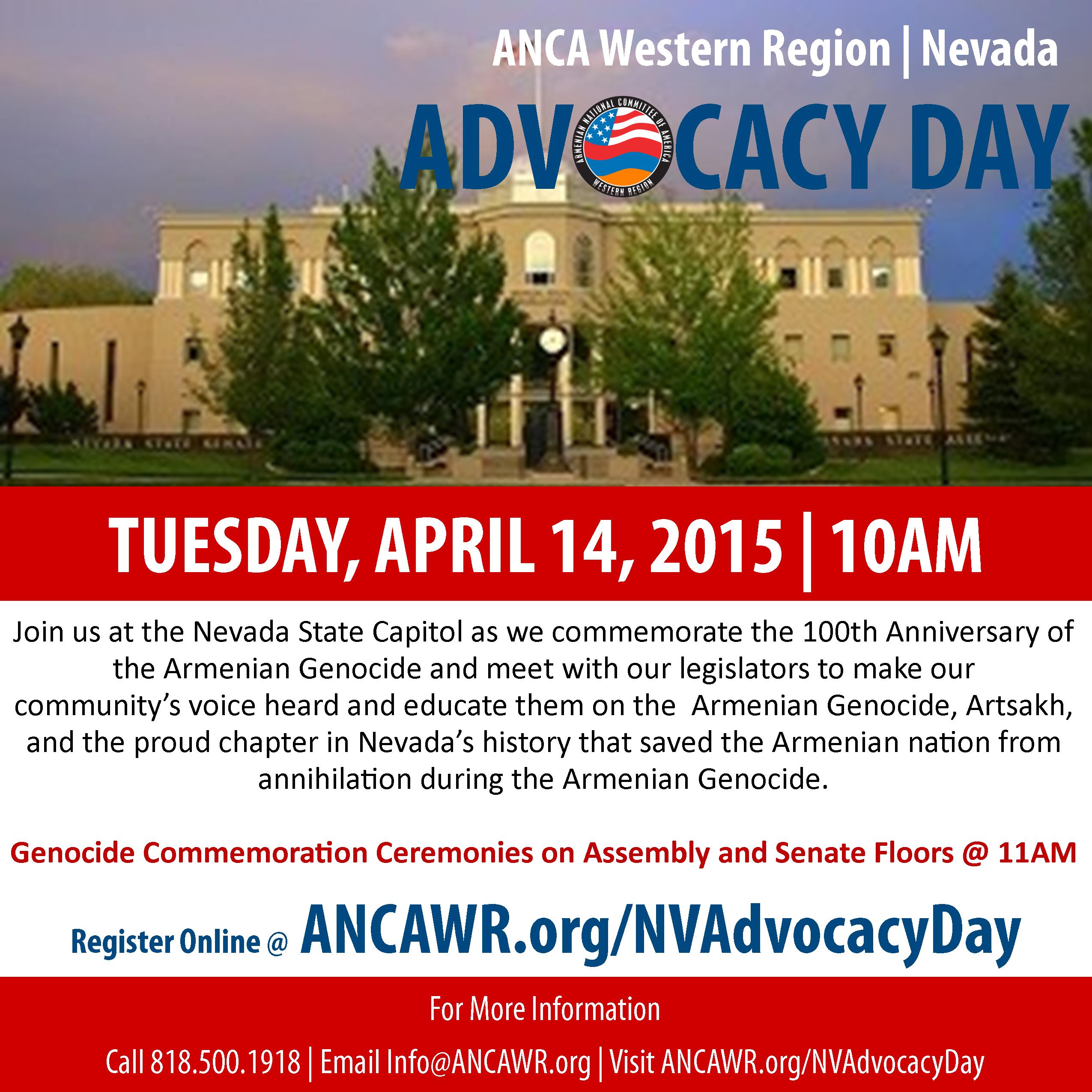 Carson City, NV – The Armenian National Committee of America – Western Region will host its first Nevada Advocacy Day on April 14, 2015 in the State Capitol, Carson City, Nevada. Expected to draw community groups, members, and activists from across the State, this one day event is designed to connect constituents with their elected officials and bring the united voice of the Armenian-American community to the Nevada Capitol.

“The Nevada Advocacy Day is of particular importance as we commemorate Nevada AD graphicthe Genocide Centennial and begin to plan activities beyond April 24 in the state, ensuring that freshmen and senior legislators alike are educated on issues of importance to the Armenian-American community,” stated ANCA WR Executive Director Elen Asatryan. “It also serves as a unique opportunity to witness democracy in action and the power of a civically engaged community. We encourage community members young and old from across the state to register and join us as we bring the Armenian Cause to the Nevada State Capitol,” added Asatryan.

The day’s activities will include Genocide Centennial Commemoration ceremonies on the State Assembly and Senate floors, community briefings, and meeting with state legislators. During the meetings, participants will educate their representatives on the proud chapter in Nevada’s history that saved the Armenian nation from annihilation during the Armenian Genocide and advocate for issues of importance to the Armenian-American community including recognition of the Armenian Genocide and recognition and self-determination of Artsakh amongst other topics.

The ANCA WR Nevada Advocacy Day will come just days before the unveiling of the Armenian Genocide Memorial plaque at the University of Nevada, Las Vegas campus on Saturday, April 18th and the official groundbreaking ceremony for the Las Vegas Armenian Genocide Memorial Monument at Sunset Park , the largest park in Las Vegas scheduled on April 24, 2015 organized by the Armenian American Cultural Society of Las Vegas (AACS) in cooperation with local and national organizations.