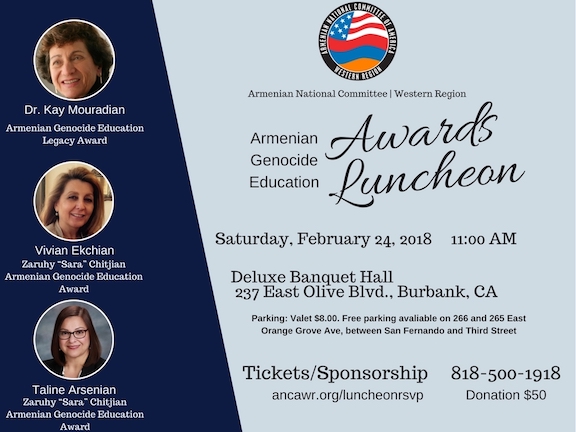 LOS ANGELES —The Armenian National Committee- Western Region Education Committee announced Friday that it will be celebrating three distinguished California educators of Armenian descent at the Second Annual Awards Luncheon to be held on Saturday, February 24, 2018 at De Luxe Banquet Hall in Burbank.

“We are honored to present two very talented educators, Vivian Ekchian and Taline Arsenian, with the Zaruhy ‘Sara’ Chitjian Armenian Genocide Education Award. We look forward to celebrating many more Armenian educators with this Award in the years to come,” noted Alice Petrossian.

Vivian Ekchian is the interim superintendent of the L.A. Unified School District, the second- largest school district in the nation. She is responsible for leading the overall operations and instructional programs of the District to create conditions that promote student success. A firm believer in the unparalleled power of education to transform lives, Ekchian has dedicated her 32-year career to L.A. Unified in various positions. In January 2018, the District’s Board of Education unanimously voted to appoint Ekchian as interim superintendent. Ekchian has represented LAUSD at Armenian Events, she speaks proudly of her Armenian heritage and has helped with numerous issues surrounding Armenian Genocide instruction and textbook adoptions for LAUSD. She has also supported the work of ANCA with professional development.

Taline Arsenian is the current President of the Glendale Teachers Association. She was very instrumental in making April 24th a “Non- instructional Day” in all of the GUSD schools and was the driving force on the GTA team in negotiating and pressing the importance of signing a joint resolution to permanently designate April 24th as the “Armenian Genocide Remembrance Day.” Arsenian has been a strong supporter of the Armenian Genocide Award Luncheon and continues to nominate fellow teachers of the award. Arsenian has been an active member of the Glendale Teachers Association since she began teaching Mathematics in the Glendale Unified School District in 1999. In addition to teaching Math at Toll Middle School and Glendale High School, Arsenian has served the GTA as a Teacher Representative, Elections Chairperson, PAC Committee Treasurer, PAC Committee Chairperson, and Bargaining Committee Member. On the GTA Executive Board, she has served as Secretary and Vice-President.

“I have a responsibility to my community to educate all my students about the historical significance of the Armenian Genocide and the impacts that the systematic denial by the perpetrators has on its survivors, whose descendants are sitting among them in class, including their teacher,” noted Arsenian. When referring to designating April 24 as the “Armenian Genocide Remembrance Day,” Arsenian states, “It was truly a goal for all teachers in Glendale to commemorate the 1.5 million losses during the Armenian Genocide by declaring April 24 a special day of commemoration and closing all schools. I had the privilege of leading that movement and with positive support from the Glendale Unified School District Board. It has been my pleasure to support the ongoing teacher training by the Genocide Education team in GUSD. I have been an active participant and supporter of the ANCA-WR Education Committee Armenian Genocide Education Award Luncheon,” said Arsenian.

In addition, the ANCA-WR Education Committee will be presenting this year’s Armenian Genocide Education Legacy Award to Dr. Kay Mouradian.

Dr. Mouradian, Professor Emerita from the Los Angeles Community Colleges, authored the novel, My Mother’s Voice, and produced it into a 25 minute documentary. The film is designed to fit into History- Social Science curriculum and has been endorsed by the National Council of Social Studies. Premiering at the Toronto’s Pomegranate Film Festival the film received Honorable Mention for the Dr. Michael J. Hagopian Award. It was an official selection in five film festivals, and now My Mother’s Voice is being developed into a play with music by two Glendale Unified drama teachers. Dr. Mouradian has and continues to fight the battle with National textbook companies on the appropriate and truthful representation of the Armenian Genocide in History textbooks sold to schools. “If the Armenian Genocide is not taught in history classes, it will fade away into history as if it never happened. Many of us are working diligently to educate the public about this historic event that became the template for the Holocaust. I especially want to acknowledge Senator Anthony Portantino, Congressman Adam Schiff, and Assemblymember Adrin Nazarian who have extended their political efforts to bring the Armenian Genocide to the attention of the California Department of Education and to textbook publishers,” noted Dr. Mouradian.
In the coming week, the committee will also announce additional public school educators to be recognized at the luncheon for their outstanding commitment and creativity to teach their students about the history and universal lessons of the Armenian Genocide.