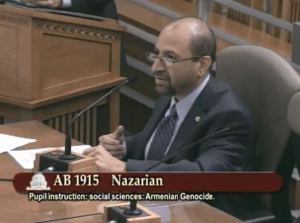 The bill, joint-authored by Assemblymembers Adrin Nazarian and Katcho Achadjian, requires the inclusion of the Armenian Genocide in the list of studied subject areas for the adopted courses of study in Social Science for 7-12, recommends for the Department of Education to include the atrocities of 1915 into publications and curriculum materials, and encourages the incorporation of an oral history component into the teaching of human rights, and genocides, including the Holocaust, Armenian, Cambodian, Darfur, and Rwandan genocides.

Chairman de Leon and distinguished members of the Appropriations Committee:

My name is Haig Baghdassarian, and I appear before you today to speak in support of Assembly Bill 1915 on behalf of the Armenian National Committee of America–Western Region. In April of this year, as in previous years, the Senate voted unanimously to promote broader awareness and a just resolution of the Armenian Genocide by adopting SJR 21, a resolution which was introduced by you Mr. Chairman, and coauthored by Senator Lara, much to the appreciation of the nearly one million Armenian Americans of our great state.
What Assemblymember Nazarian is seeking to do by introducing AB 1915 is to ensure that future generations of Californians will not forget about the horrors inflicted upon our ancestors nor about the lessons which may be learned from this dark chapter of modern human history.
What is particularly significant about this bill is that students would learn about crimes against humanity of the past century in a comprehensive manner by including not only the Armenian Genocide and the Holocaust, but also the Cambodian, Darfur and Rwandan genocides.
The Armenian Genocide has already been incorporated into the History-Social Science Curriculum Framework and Content Standards. So why is this bill necessary? Simply put, because despite the curriculum framework and the existence of teaching materials, it is not being taught in the overwhelming majority of California’s world history classrooms. This bill will bring the Education Code closer in line to the existing framework and alert our educators about the importance of the inclusion of the Armenian Genocide into the curriculum.
There would be some costs to incorporate the Armenian Genocide into the social studies curriculum, but these costs would be minimal. This is true because a California non-profit organization —the Genocide Education Project— developed lesson plans and other curriculum materials related to the Armenian Genocide which would be available for as little as $25 per school.
We tend to speak about the Armenian Genocide in the abstract, but I’d like to take a moment to share my personal connection. All four of my grandparents were Genocide survivors. Whenever I think about those events, I immediately imagine my nine-year old grandfather, Hrant Chaglassian, watching helplessly with his mother and siblings as Turkish gendarmes came to their home in the town of Kilis and forced his father, Toros, to leave his family, never to be heard from again. I picture my wife’s grandfather —Aram Hovsepian— who was orphaned and left for dead after witnessing the brutal murder of his young mother; that four year old child spent months on the street before Near East Relief —an American humanitarian effort— rescued him and placed him in an orphanage.
Once again, I urge you to support AB 1915, I thank Assemblymembers Nazarian and Achadjian for their leadership on this issue, and I thank you for your time.