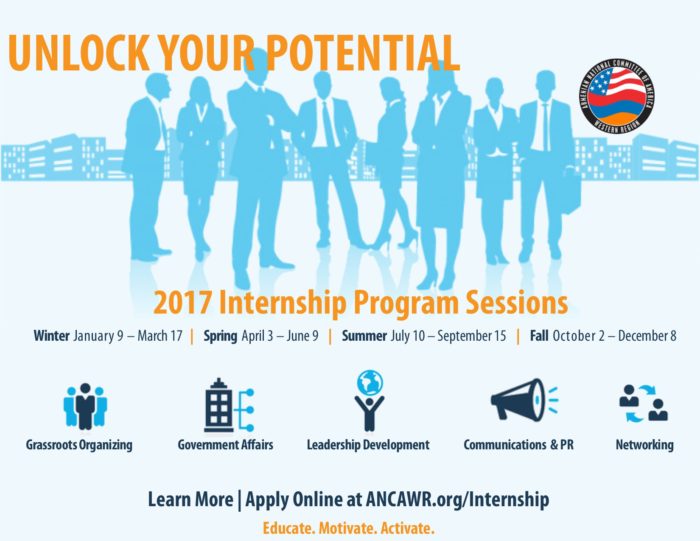 LOS ANGELES—The Armenian National Committee of America – Western Region (ANCA-WR) announced today that it will be accepting applications for all four 2017 sessions of its internship program. Interested individuals may apply online at ancawr.org/internship.

“By participating in this program I am learning how Armenian-Americans affect local, state, and the federal government through advocacy and grassroots organizing. This internship is also training me on how to effectively communicate relevant issues to our community and to elected officials,” noted current ANCA WR Fall Intern Hasmik Burushyan. “Ultimately, I will be taking the skills I learn at the WR internship and apply them toward career goal of defending victims of human rights violations, especially as they relate to the status of women in third world countries,” she continued.

The ANCA-WR Internship Program is an intensive 10 week program that prepares college students and recent college graduates for a professional work environment while learning the intricacies of the Armenian-American advocacy world. Interns will learn the nuts and bolts of community organizing through weekly workshops and lectures with community leaders, assignments ranging from assisting organizational committees that implement policy, programs and events to registering community members to vote and working with local chapters on issues that affect the Armenian-American community.

Intern workshops feature a variety of guest speakers including public officials, ANCA leadership, and specialists from the community. Interns are exposed to a large network of professionals through their visits to government offices, giving them the opportunity to discuss their career goals and interests with professions in various fields.

Participants are required to commit 20 hours a week during the winter, spring and fall sessions. During the summer session, interns are required to complete 30 hours a week; included in the 30 hours is an externship component, where participants will be able placed in an office specifically in their field of study or interest. Past placements have included election campaign offices, media outlets, various Armenian organizations, elected officials offices.. In successfully completing all internship program requirements, participants may receive school credit. Though rigorous, the program fully prepares applicants for post graduate positions in private and public offices.

The 2017 Internship session dates are as follows:

“It has been profoundly rewarding to work with a group of driven individuals who were focused on the must larger objective of progressing the issues of the Armenian community in the United States and around the world. Whether it was voter registration drives, workshops, or advocacy trips, the grueling rewarding work allowed me to reflect on my experiences and my identity as an Armenian living the in the United states. This internships was far more than menial tasks, it developed me as an Armenian, a professional, a grassroots organizer and a human being,” stated 2015 Summer Intern Morris Sarafian.

“The ANCA-WR is proud to contribute to the success of our youth by equipping them with the necessary skills, knowledge and contacts they need to begin their career paths,” commented ANCA-WR Executive Director Elen Asatryan. “Each of our youth and leadership development programs – from the WR Internship, Karabian Fellowship in Sacramento, the Leo Sarkisian Internship and the Capital Gateway Fellows programs in Washington DC are designed to mentor and cultivate young leaders, and prepare them for future service opportunities in the public affairs arena”.

For more information about the ANCA-WR Internship Program, e-mail Internship@ancawr.org or call 818.500.3333.

Established in Summer 2006, the ANCA Western Region Internship Program is a selective part-time leadership program, which introduces high school graduates, college students, and recent college graduates to all aspects of the public affairs arena. The program provides an opportunity for student leaders and activists to gain an in-depth understanding of the American political system, Armenian-American issues and advocacy efforts on the local, state and federal levels.