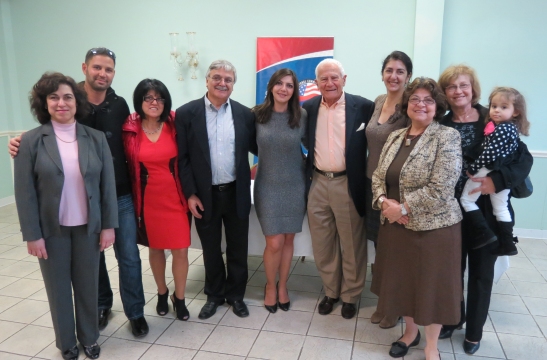 Houston, TX- On Sunday, January 26, 2014, over 70 community members from the Houston area gathered at Saint Kevork Armenian Church’s Tcholakian Hall for a town hall meeting organized by the Armenian National Committee of America – Western Region. The event, which was preceded by a series of similar town hall meetings in Boise, Fresno, Las Vegas, San Francisco and Phoenix, was successful in the overarching effort to reactivate and engage Armenian American communities throughout the Western United States.

“We were pleasantly surprised to see such a large and enthusiastic crowd attend the town hall gathering. Everyone was very engaged in the topics covered, including Genocide recognition, independence for Artsakh, and U.S. foreign aid to Armenia, and it was most heartening to witness their enthusiasm to participate locally,” stated ANCA-WR Executive Director Elen Asatryan. “We look forward to working closely with our friends in Houston in the coming weeks and months to help them establish a strong local chapter, the first of many to come in the Western United States,” added Asatryan.

During the meeting, which lasted for over 2 hours and consisted of continuous open dialogue, many issues essential to the Armenian cause were discussed, including H.Res 227, the Armenian Genocide Truth and Justice Resolution, a resolution that builds upon U.S. recognition of the Armenian Genocide. Asatryan also presented the ANCA organizational structure, its priorities for the coming year and the challenges facing the Armenian American communities at the local, state and federal levels. Other noted topics of discussion included the upcoming advocacy days in California and Washington D.C., US recognition of independence for Artsakh, and AB-659, a bill which bolsters the incorporation of oral testimony and teacher training about the Armenian Genocide in California’s public schools. Finally, Asatryan discussed the various community service initiatives launched recently by the ANCA-WR and its local chapters. The meeting wrapped up with a Q&A session, followed by one-on-one discussions with attendees on how they can get involved in organizing their local chapters.

A specific issue of concern raised by the Houston attendees included the Harmony Public Schools in the area, a system of publicly-funded charter schools highly criticized for spreading Turkish propaganda. Because these schools are funded by Americans’ tax dollars, they present an issue not just to Armenian-Americans but to all Americans.