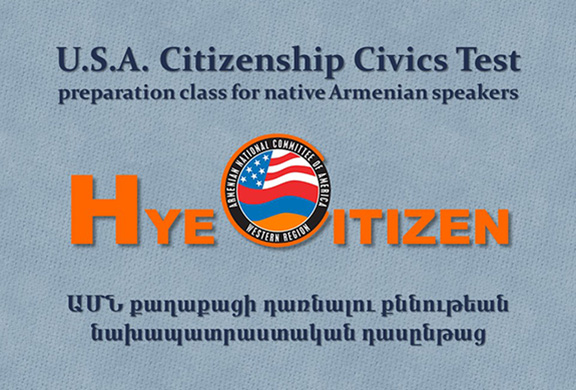 “Our grassroots outreach across the region has identified the urgent need to assist Armenian Americans in preparing for the Civics portion of the USA citizenship test, since many permanent citizens delay or even forego applying for naturalization, in part, due to the lack of accessible training programs. According to the University of Southern California, the naturalization rate among local Armenian-speaking legal permanent residents has been 84%, much higher than the lowest of 55% among Spanish speakers yet below the highest rate of 91% among Vietnamese speakers. Among Eastern Armenian-speaking residents born in the Republic of Armenia, the naturalization rate is even lower – 80%,” continued Hovsepian.

“Green card holders who fail to apply for US citizenship not only risk losing their legal status, even under such commonplace circumstances as undertaking prolonged overseas trips, they also miss out on unique opportunities to become policy influencers as voting constituents. The political climate over immigration makes the need to naturalize at the earliest available opportunity even more critical, which is why we are pleased to have created a widely-accessible training program to help native Armenian speakers to learn US civics,” continued Hovsepian.

Produced by ANCA-WR’s Denver-based Community Development Coordinator and Political Scientist Simon Maghakyan, with narration, production, and translation assistance from ANCA-Colorado volunteers Susanna Avagyan, Angela Ginosyan, George Cole, and Hasmik Kachaturian, HyeCitizen is a 50-minute-long bilingual video training for native Armenian speakers for the Civics Test required for US naturalization. The training covers all 100 questions issued by the U.S. Department of Homeland Security’s Citizenship and Immigration Service, including 57 questions about principles of American democracy, system of government, and rights and responsibilities, 30 questions covering topics from the colonial period to the past few decades, and 13 questions about geography, holidays, and national symbols. The training has built-in bilingual closed-caption, as well as pronunciation tips, making it accessible to individuals with hearing impairment.

HyeCitizen is in both English and Eastern Armenian, which enables native Armenian speakers, especially those born in the countries of Armenia, Artsakh, Georgia, Azerbaijan, Iran, and Russia and the rest of the former Soviet Union, to not only learn the US Citizenship Civics Test by memorizing the questions and answers in English but also by understanding the concepts and contexts. Additionally, HyeCitizen enriches the training with background information, including maps and original documents, to further contextualize many of the civics test questions and explain their historical meanings. Notably, the program explains the USA’s unique Electoral College, even though the test itself has no direct questions about this complex yet vital institution of American democracy. For current public official, state and district specific questions that are subject to change due to elections or appointments, HyeCitizen references reliable weblinks for finding out accurate, up-to-date answers.

Native Armenian speakers who are applying for US citizenship can access ANCA-WR’s free HyeCitizen bilingual training program for the US Citizenship Civics Test on www.ancawr.org/hyecitizen.

The Armenian National Committee of America Western Region is the largest and most influential Armenian-American grassroots advocacy organization in the western United States. Working in coordination with a network of offices, chapters, and supporters throughout the western United States and affiliated organizations around the country, the ANCA-WR advances the concerns of the Armenian-American community on a broad range of issues.