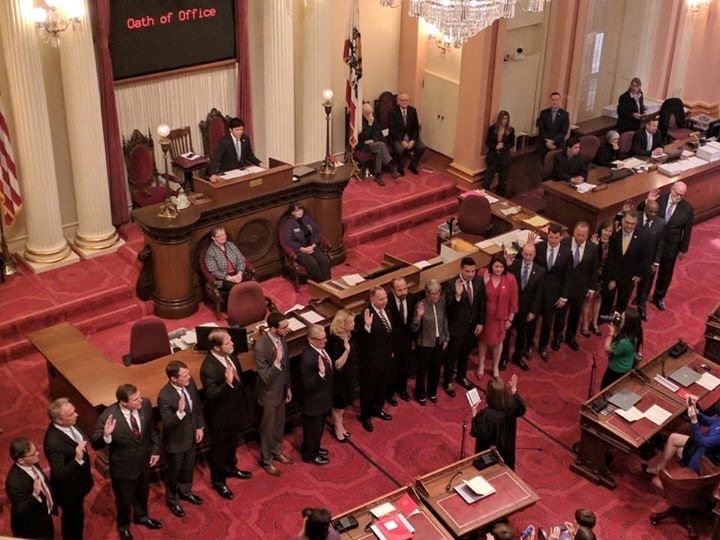 SACRAMENTO – On Monday, December 5, 2016, a delegation of representatives from the Armenian National Committee of America – Western Region (ANCA-WR) made a trek up to Sacramento to participate and witness the swearing-in ceremonies of the members of the California State Legislature and meet with legislators to convey issues of priority for the Armenian-American constituencies. “We look forward to working with Speaker Rendon, Senate President pro Tem de Leon, the Armenian Legislative Caucus, and all elected officials to advance the interests of our community at the State Capitol over the next two years,” said ANCA-WR Chair Nora Hovsepian.

Nine Freshmen State Senators joined thirty-one incumbent Senators, and 22 Freshmen Assemblymembers joined 58 incumbent members in what is likely to be the largest turnover in membership within the legislature until 2024, due to the recently enacted changes in term limits. Nearly all of the ANCA-WR endorsed candidates were elected to office in November. Among the endorsees joining the State Senate are: former Assemblymember Scott Wilk from the Armenian Legislative Caucus, former Assemblymember Anthony Portantino, and San Francisco Supervisor Scott Wiener. Senator Portantino, who is hosting the first ever Karabian Fellow in Sacramento, Anahit Sargisyan, welcomed the ANCA-WR delegation during a post ceremony luncheon.

Assemblymember Adrin Nazarian, who was honored as Legislator of the Year at the ANCA-WR banquet in October, was sworn in for his third term. During the past four years, Nazarian has led the way on many issues of concern to the Armenian community, including Armenian Genocide education, state divestment from the Turkish government, and funding for the construction of the Armenian Museum in Glendale. Assemblymember Nazarian, Senator Wilk and their former colleague, former Assemblymember Katcho Achadjian, were instrumental in establishing the Armenian Legislative Caucus, ensuring passage of the Artsakh independence resolution in 2014 (AJR32) and for organizing an unprecedented number of events in commemoration of the Genocide Centennial in 2015 in the state’s capital.

The legislature did not waste any time getting down to business. Assembly Speaker Anthony Rendon (D-Paramount) and Senate President pro Tempore Kevin de León (D-Los Angeles) led their respective chambers to adopt identical resolutions that ask the President-elect not to employ a mass-deportation strategy. New bills were also introduced to strengthen due process rights and protections for undocumented residents should President-elect Trump pursue overly aggressive immigration enforcement actions.