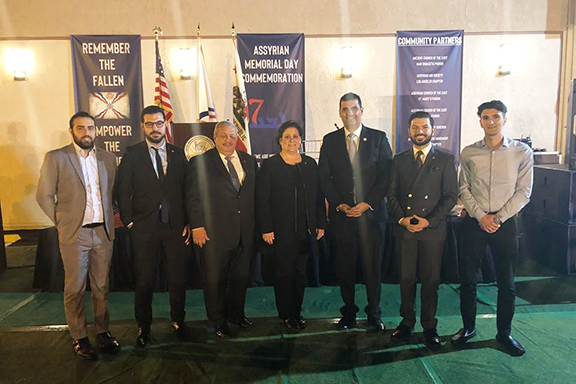 “The relations between the Armenian and Assyrian nations stretch back for millennia,” remarked ANCA-WR Chair Nora Hovsepian, Esq. “Staying true to this history, we stand in strong solidarity with our coalition partners at the AAASC and the Assyrian community in calling for truth and justice for the genocide of 1915 perpetrated by Ottoman Turkey against the Armenians, Greeks, and Assyrians.”

The AAASC and ANCA-WR recently institutionalized their relations by signing a Memorandum of Understanding and Cooperation in July.

During the ceremony, ANCA-WR Executive Director Armen Sahakyan offered remarks on behalf of the Armenian American community. For the past three years, the ANCA-WR representatives have attended and participated in the program at the Assyrian Memorial Day ceremonies.

The full text of Armen Sahakyan’s remarks are available below. The video is available online.

First, I wish to thank the Assyrian American Association of Southern California—our freshly-minted official coalition partner—for organizing this important commemoration ceremony and inviting us to partake. The Armenian National Committee of America – Western Region and the Assyrian American Association of Southern California signed a historic memorandum of understanding and cooperation three weeks ago, institutionalizing our relations and putting forth the objectives of supporting the inalienable right to self-determination of Assyrians in the Nineveh Plains, upholding the independence of the Republic of Artsakh, and as co-victim nations, seeking truth and justice for the genocide of 1915.

Tonight, we’ve gathered to remember the fallen. Remembrance is an integral part of our human experience. Generations have been passing on their memories and experiences onto the next to propel us all forward and guard against the evils of the past.

For the fraternal Assyrian, Greek, and Armenian Nations—whose intertwined histories stretch back into the far antiquity—remembrance has a special significance. From the pre-historic stone-carved tablets and the intricately illustrated medieval manuscripts to the elaborate toasts around the table and the modern digital forms of communication, we continue to pass on the wisdom, traditions, and stories of our ancestors to the younger generations.

Remembrance, however, would be meaningless without an underlying call to action. What are we to do with the stories of the past, if not help them guide our actions to build an ever more peaceful, prosperous, and just world than the one that we inherited?

And what better example to illustrate this point than that of the Assyrians, Armenians, and Greeks. Survivor nations. Victorious nations, that despite being subjected to the most vile and gruesome of crimes—the international crime of genocide—rose from the ashes and dust of the Syrian desert, animated by the stories of the past, with the blood of their proud tribes throbbing through their veins, with renewed energy and the resolute determination not only to survive, but to live and thrive.

We remember the horrors that befell our peoples during Seyfo, the Armenian Genocide, and the Greek Genocide at the hands of the Ottoman Turkish government. We remember the Simele Massacre, the Turkish invasion of Cyprus, and the Azerbaijani aggression against Artsakh and the destruction of our civilization in Nakhijevan. We remember to safeguard the truth, and not for its own sake, but truth in the service of justice!

As long as it may take, the arc of history does eventually bend towards justice, and that justice we shall receive. Through our activism, our determination, and our unity, we have been chipping off one brick at a time from the thick wall of Turkish denial and will not rest until truth and justice are served for our nations!

The ANCA Western Region is the largest and most influential nonpartisan Armenian American grassroots advocacy organization in the Western United States. Working in coordination with a network of offices, chapters, and supporters throughout the Western United States and affiliated organizations around the country, the ANCA-WR advances the concerns of the Armenian American community on a broad range of issues in pursuit of the Armenian Cause.