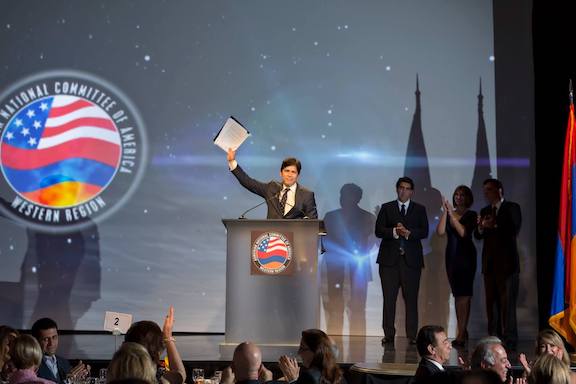 GLENDALE—The Armenian National Committee of America – Western Region announced this week its endorsement of California Senate Pro-Tem Kevin de León for U.S. Senate. De León, a Democrat from California is challenging Dianne Feinstein, who has held the position since 1992.

De León announced his bid in mid-October when he kicked off a rally at the Los Angeles Trade Technical College with numerous supporters.

“Throughout his political career, Kevin de León has been a true friend of the Armenian community, supporting many of our efforts and listening closely to our concerns. Just as he earned the Legislator of the Year award in 2014, he has also earned our endorsement in his bid for US Senate, and we look forward to continuing our constructive relationship with him on the road to Washington,” said ANCA-WR Chair Nora Hovsepian.

“I am deeply honored to have the endorsement of the Armenian National Committee of America – Western Region,” said Senator Kevin de León. “I have had the privilege of representing thousands of Armenians who live in my district, including those in the culturally-rich, thriving community of Little Armenia. Given the strength of the relationship we have built over the years, I am a proud member of the California Armenian Legislative Caucus. The endorsement of the ANCA-WR is a testament to the work we’ve done together to improve the lives of California’s Armenian-Americans. I commit to continue that work as California’s next U.S. Senator.”

At his rally in October, de León explained the complexities of the current political climate and promised to challenge the Washington establishment if he were elected.

“Now is the time for a senator who is willing to stand up and be heard, not from the sidelines, but loud and proud from the front lines,” he told the crowd that day.

De León has been a steadfast supporter of Armenian-American issues in the California legislature since his early days at the California State Assembly. His work only continued during his tenure at the state Senate where he’s worked to recognize and commemorate the Armenian Genocide every year and was monumental in establishing support for legislation that recognized the independence and right to self-determination of the people of Artsakh.

More recently, Senator de León played a significant role in securing $3 million for the construction of the Armenian American Museum and Cultural Center of California and the allocation of $10 million for programs related to the implementation of the new History/Social Science curriculum framework, including Armenian Genocide education. Both of which, Governor Jerry Brown approved in the state budget.

In 2016, de León joined a large group of California state legislators by endorsing Ardashes “Ardy” Kassakhian for his campaign for Assembly District 43. In September of the previous year, he became the first Senator to join the California Armenian Legislative Caucus.

Prior to being elected to the California Senate, de León served four years as a State Assembly member for the 45th district that included Hollywood and more specifically the Little Armenia neighborhood, which is home to the St. Garabed Armenian Church, Rose and Alex Pilibos Armenian School, the Armenian Youth Center of Hollywood and the headquarters of the Asbarez newspaper and Horizon Armenian Television.

Some of his local community efforts include his work to erect signs on the 101 Freeway to direct drivers to Little Armenia and his assistance to the Armenian Relief Society’s Hollywood Social Service center during the holiday season. It was also through his efforts that famed international singer and musician Charles Aznavour received a star on the Hollywood Walk of Fame.

Senator de León grew up in the San Diego barrio of Logan Heights. He was the first in his family to graduate from high school. He attended UC Santa Barbara and graduated from Pitzer College at the Claremont Colleges with Honors. He is a Rodel Fellow at the Aspen Institute and a guest lecturer at the University of Southern California. He has one daughter.

To learn more about de León and his campaign, please visit https://www.kevindeleon.com/.

The Armenian National Committee of America-Western Region is the largest and most influential Armenian-American grassroots advocacy organization in the Western United States. Working in coordination with a network of offices, chapters, and supporters throughout the Western United States and affiliated organizations around the country, the ANCA-WR advances the concerns of the Armenian American community on a broad range of issues.