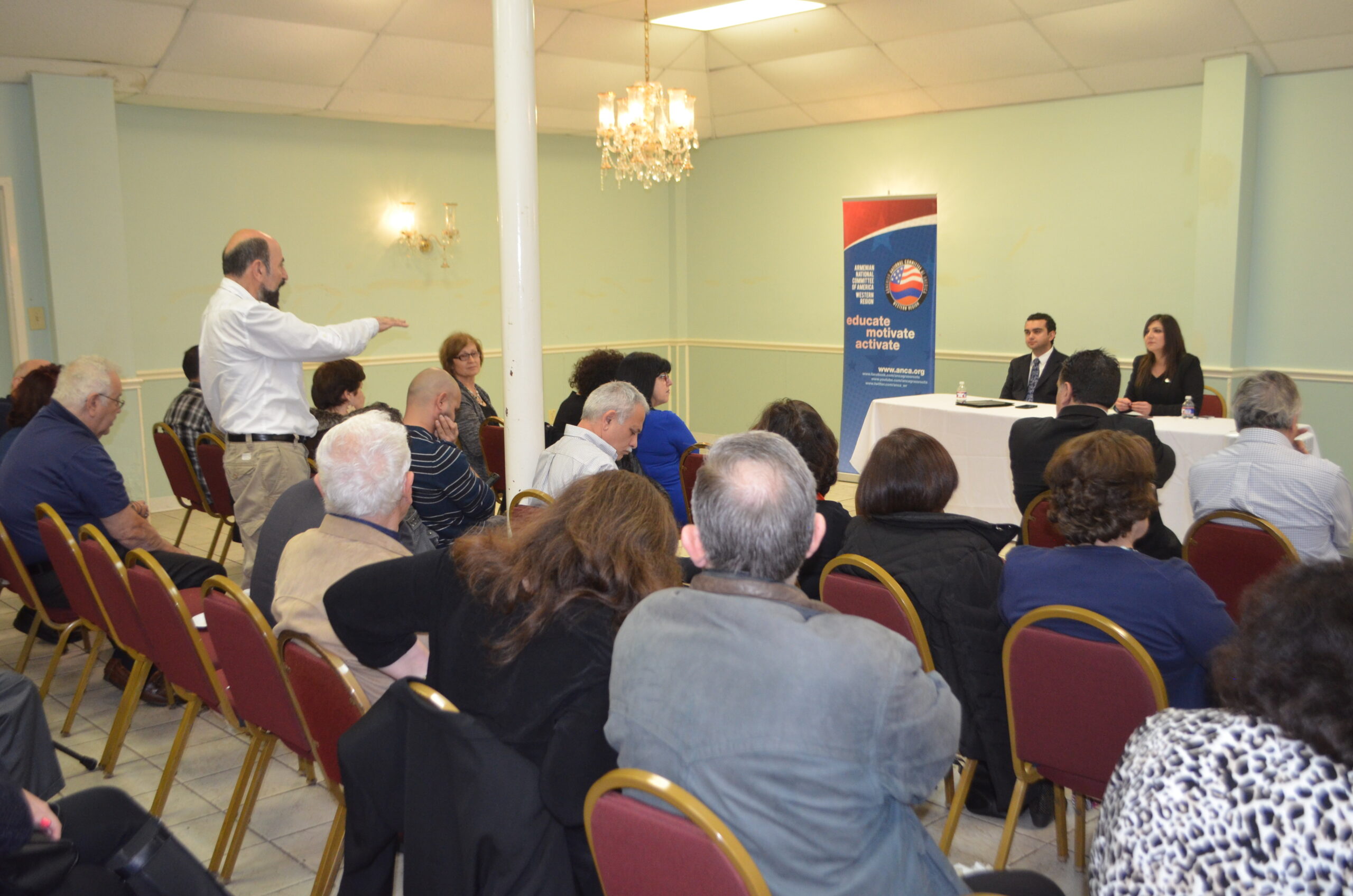 This past weekend, Armenian National Committee of America – Western Region (ANCA-WR) Executive Director Elen Asatryan and Community Development Coordinator Simon Maghakyan Houston 1toured through Texas for a series of engaging and fruitful meetings with Armenian-American community members and activists in Dallas and Austin ahead of ANCA-WR’s highly anticipated Town Hall meeting in Houston on Sunday March 1.

“The energy and resolve with which our grassroots in Texas are engaging with both local community organizations and their elected officials to build effective partnerships for promoting their respective communities’ issues of concern is commendable and inspiring,” remarked Asatryan. “In less than 36 hours we traversed 300 miles and had the pleasure of meeting with, learning from and collectively strategizing actionable next steps for the continued advocacy of our Cause,” added Asatryan.

While in Dallas, Asatryan and Maghakyan visited St. Sarkis Armenian Church to meet with local photo 1community leaders including Fr. Ghevont Ajamian, pastor of to learn more about the community’s Centennial commemorations. Asatryan and Maghakyan provided updates about the recent activities and programs of ANCA-WR’s, “America We Thank You (AWTY): An Armenian Tribute to Near East Relief (NER),” committee which pays tribute to the unprecedented legacy of NER—the United States’ first Congressionally sanctioned organization—and its successes in mobilizing all segments of the American citizenry including elected officials, celebrities and laypersons alike, to save and sustain survivors of the Armenian Genocide, perpetrated by Ottoman Turkey, for 15 consecutive years from 1915-1930.

Asatryan and Maghakyan continued on to their second meeting of the evening and joined with local activists in Dallas with whom they had been working closely over the last several months in anticipation of a major advancement for Dallas’ local grassroots.

“The ANCA-WR is proud to confirm that Dallas will be home to our newest local chapter,” stated Maghakyan. “We have been working closely with our grassroots in Dallas who are ready and committed to spearhead their efforts moving forward as an official local chapter,” he added.

“Upon moving to Dallas two years ago, I have had the good fortune to align with fellow Armenian-Americans committed to advancing our community’s interests, and in order to structure our goals and enhance our outreach work especially with respect our demands for Armenian Genocide recognition, we decided it was time to coalesce a local ANCA-WR chapter in Dallas,” said community member Lucia Nazarian, who graciously hosted and organized the evening’s intimate meeting in her home. “Our in-person meeting with Elen and Simon was instrumental in solidifying this initiative and we are very excited for our community’s role as we move forward to officially join the ANCA-WR family,” added Nazarian.

From Dallas, the ANCA WR team headed to Austin Saturday morning where they met with local community members who provided an update about their recent activities and discussed their plans for activism moving forward.

Arriving in Houston on Saturday night, Asatryan and Maghakyan met with Western Region representatives from Los Angeles who had flown in earlier that day for meetings with their respective organization’s Houston leadership and membership in advance of participating in Sunday’s scheduled Town Hall. Toros Kejejian and Silva Kechichian from A.R.F. development committee, Satenig Ghazarian from the Armenian Relief Society and Arpa Hatzbanian from the Armenian Youth Federation, along with Asatryan and Maghakyan met with a group of 15 and discussed the details of their upcoming Centennial events and also provided them with tools and resources as they collaborated to outline impactful strategies for meeting their immediate and long-term goals.

At 1pm on Sunday, March 1 an energized group of attendees, arrived at St. Kevork Armenian Church to participate in Houston’s ANCA-WR Town Hall meeting. ANCA-Texas chairperson Vrouir Frankian offered welcoming remarks and provided a detailed outline of the community’s upcoming Armenian Genocide Centennial commemoration at the Texas State Capitol on April 18. Frankian also shared exciting details about the ANCA-WR’s co-sponsorship of the Holocaust Museum of Houston’s display of the photographic exhibit entitled, “The Armenian Genocide and the Holocaust: One Man Takes a Stand,” curated by the Armin T. Wegner society, which includes 60 photographs from Wegner’s collection, which will be on display from April 1 – August 7, 2015.

Enthused by the breadth and scope of the dynamic activities and inspired by all that is underway by the local grassroots, Asatryan and Maghakyan expressed their appreciation for the community’s dedication and provided all those in attendance with an overview of the ANCA-WR’s recent progress to date and elaborated on the means with which its priorities including expansion within the western region, recognition of the Armenian Genocide by the United States, Genocide education in public school, securing maximum aid to Armenia and Artsakh, the organization’s AWTY Centennial initiative, and Hye Votes, are being pursued and realized. Asatryan shared details surrounding South Dakota becoming the forty-third United States state to recognize the Armenian Genocide through its adoption of House Concurrent Resolution 1009, while Maghakyan noted the pivotal role of a handful of motivated and activated grassroots, which ensured that victory.

Fr. Martiros Hakobyan pastor of St. Kevork Armenian Church relayed that on February 12, 2015 the ecumenical group “Christian Churches Together in the USA” hosted a panel on the Armenian Genocide as part of its annual convocation, which was held at St. Kevork Armenian Church. The panel included talks by historians Rachel Goshgarian and Taner Akçam who spoke about the Armenian Genocide, and was moderated by Archbishop Vicken Aykazian, Diocesan Legate and Ecumenical Director and the current President of “Christian Churches Together,” which founded in 2001, is comprised of more than 40 churches and organizations, including Evangelical, Pentecostal, Orthodox, Roman Catholic, historic Protestant, and African American churches.

Also announced at the Town Hall was Texas’ inaugural Advocacy Day set for April 14, 2015, which mirrors the ANCA-WR Advocacy Day series in California over the last decade wherein the entire community is invited for a unique opportunity to spend the day at their State Capitol meeting with their elected officials and networking with fellow Armenian-American activists who have gathered from cities throughout the state.

During the presentations, community members were invited to ask questions, make recommendations, and learn about the various initiatives underway locally with which they were encouraged and invited to become even more involved. An engaging dialogue for over an hour followed the presentation.

“Events like the ANCA-WR Town Halls serve as an important tool for educating the community and keeping them informed of our most pressing issues. Our Government Affairs committee is comprised of a diverse and very committed group of people who recognize the obstacles we face here in Texas but we know that if we work hard and smart we will succeed with our objectives,” reflected Kanayan.