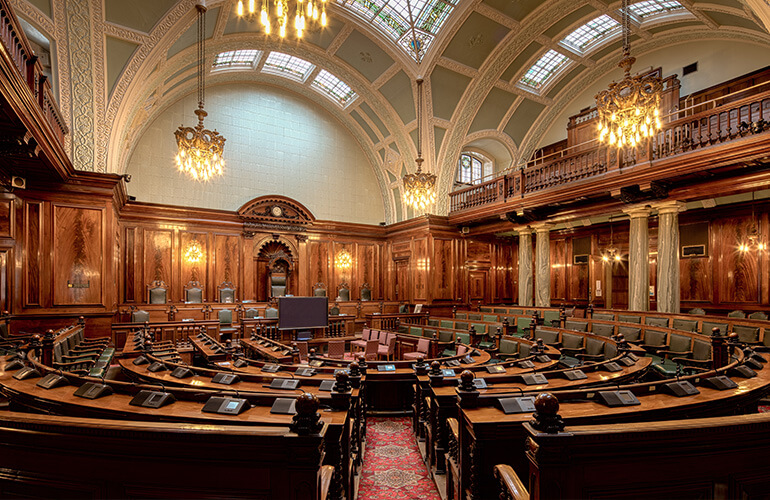 (March 24th) With the 99th Commemoration of the Armenian Genocide only a month away, Armenian National Committee of America Western Region (ANCA WR) Executive Director Elen Asatryan and Legislative Affairs Director Haig Baghdassarian traveled to the states of Colorado and Utah to engage and activate the Armenian communities through a series of town halls and meetings with federal and state level officials.

The first town hall was kicked off on Sunday, March 16th in Thornton, CO where community members young and old joined in on a heavy discussion about challenges facing the community, recent successes, and plans for the future, while excitedly signing on to lead efforts in the state. The town hall meeting was followed by attendees teaming up with the ANCA Western Region for two days of back-to-back meetings with their state and federal level representatives to convey issues of importance to the community.

“It was tremendous having Elen and Haig visit our community and brief us on so many issues vital to the Armenian-American community. Whether regarding the efforts of opposing interests or the ongoing work to secure renewed recognition by the US Congress, these topics were received by our Colorado Armenian community with a clear level of awareness and eagerness to participate. As a result of our community Town Hall meeting, many expressed readiness to get involved at a level they had not previously shown,” stated Jirair Christianian, a community activist from Colorado.

“We appreciate the outreach efforts of the ANCA WR and initiation of this very informative town hall through which we were able to learn about their work, their latest projects and their contribution to the Armenian cause,” noted Sona Hedeshian, Chair of the Armenians of Colorado. “I was very pleased to see the interest and the level of participation by our community members in the discussion of issues concerning Armenians throughout the world. We look forward to more meetings with ANCA WR in the future and we appreciate their support and readiness to assist,” added Hedeshian.

The visit to Colorado was followed by one to Salt Lake City, Utah on Wednesday, March 19th where Asatryan and Baghdassarian, right after landing, met local community members in front of the offices of their congressional representative for a scheduled meeting. That same evening, a crowd of over 40 enthusiastic Utah area Armenians gathered at the Armenian owned Arbat Banquet Hall for the ANCA WR Town Hall meeting – eager to learn about ways they can carry the torch of the Armenian Cause in the state and resources available to them through the ANCA WR. The trip concluded with additional meetings with congressional offices throughout the day on Thursday, March 20th.

“The ANCA’s visit to Utah was, in effect, a breathe of fresh air. It re-oriented members of the Utah-Armenian community towards more effective routes of advocacy, provided insight into the ongoing efforts to prepare for the centennial of the Armenian Genocide, and, looking forward, will serve to energize members of the Utah Armenian community to help maximize the prosperity of all Armenians, without regard to state boundaries,” stated Zaven Sargsian after attending the ANCA WR Town Hall in Utah.

“A constituent sitting across the table from his/her elected representative (or his/her senior advisor) is everything, it makes all the difference. I learned this yesterday while visiting Congressman Chaffetz’s office with Elen and Haig. The senior advisor’s face ”lit-up” when I said ‘he is my congressman, I voted for him, and this is what I want’. I urge everyone to join the ANCA when they are in your area and asking you to join them on their visit to your elected representatives’ offices to further the Armenian Cause because it truly goes a long way,” commented Ohannes Megerdichian of Utah.

The ANCA-WR town halls provided attendees with an overview of the organization, its priorities including recognition of the Armenian Genocide by the United States, aid to Armenia and Artsakh, its ”America We Thank You: An Armenian Tribute to Near East Relief,” initiative, which honors the outpouring of generosity by the US and the American people in the immediate aftermath of the Armenian Genocide through the Near East Relief, and recent developments effecting Armenian-Americans, Armenia and Artsakh. During the presentations, community members also had an opportunity to ask questions, discuss issues of concern, make recommendations, and learn about ways to get involved with ANCA efforts locally. The priorities, concerns shared, and issues of importance to the community were then relayed to elected officials during the meetings.

“Our heartfelt appreciation and gratitude goes out to the Colorado and Utah Armenian communities for their hospitality, energy, and activism as well as to everyone who assisted in organizing the town halls and meetings with officials,” stated Elen Asatryan, ANCA WR Executive Director. ”It was truly incredible to witness how engaged and active each of the communities are in their respective states – from placing a Khachkar and instituting an Armenian garden at the Colorado State Capitol to holding regular meetings with their officials to convey and push forth issues important to the Armenian-American community. We look forward to working with them closely to build on their previous successes in the weeks, months, and years ahead,” added Asatryan.

Photos may be found here.