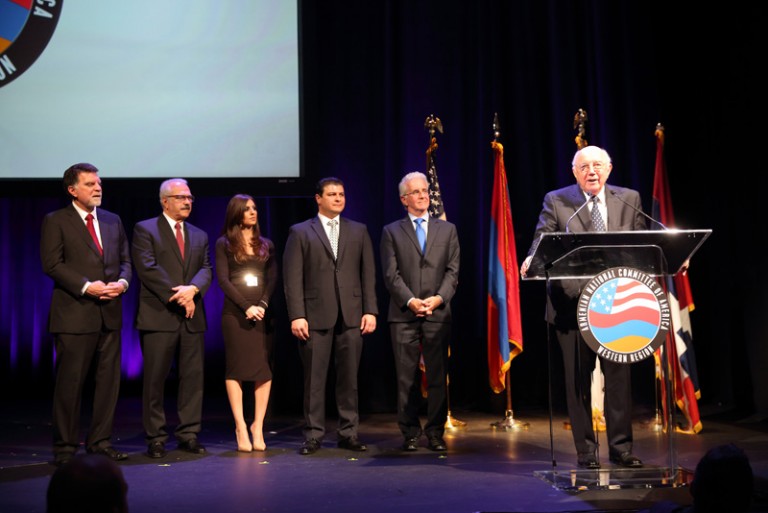 Sacramento, CA – The Armenian National Committee of America – Western Region proudly announced the official establishment of the Walter and Laurel Karabian Fellowship for Public Policy. Housed under the ANCA-WR, the fellowship will be the first Sacramento based program of its kind with the goal of preparing the next generation of Armenian-American policy leaders.

“The ANCA-WR has been looking to establish such a program in Sacramento for many years, and Mr. Karabian’s generosity has finally enabled us to do so. Throughout his life, Mr. Karabian has mentored countless young individuals, paving the way and guiding them in their pursuit of higher education, community service and public office, and it is only fitting that his legacy and work continue through this fellowship program,” noted ANCA WR Chair Nora Hovsepian. “We are grateful to Mr. Karabian for entrusting us with this unique program that will serve our community for generations to come and will empower our youth to seek careers in public policy,” added Hovsepian.

Initially announced in late October in front of over 1,400 supporters, donors, and activists during the ANCA-WR Annual Gala Banquet where the Honorable Walter Karabian was honored with the ANCA WR Legacy Award, the fellowship program is geared toward recent college graduates and is made possible by the Karabian family’s generous funding.

“Having been a legislator and leading a productive life in politics, I know firsthand the value of programs that will develop the next generation of leaders,” stated Karabian. “The ANCA-WR is the leading Armenian advocacy organization and has a strong track record of deliverables, which include internship and externship programs for the youth in the community. For this reason, it is my honor to help plant the seeds for a much needed public policy program for our youth in the Golden State’s Capital. I am confident that under the supervision of the ANCA-WR, this program will expand and flourish in coming years to produce a generation of new policy leaders,” added Karabian.

The year-long fellowship will be divided into two six month long phases. During the first six months, fellows will work on public policy related matters in Sacramento ranging from state office holders and administrative offices, to non-profit organizations, advocacy groups, labor unions and consulting firms. During the second six months, fellows will work exclusively for one legislator in the Assembly or Senate.

In addition to the projects assigned to them by supervisors at the various offices or agencies, fellows will be required to attend networking events and weekly seminars throughout the year, providing professional training, networking skills, and opportunities to meet other professionals within the public policy sector.

Participants will need to make a commitment of at least one year and will be provided a stipend to assist with housing and living costs.

Applications and additional details will soon be forthcoming.

Born in Fresno, California, Walter Karabian is the oldest son of John Karabian and Zevart Shishmanian. Karabian’s paternal family arrived in Fresno in 1896 from Bitlis, and his maternal family was from Dikranagert in Turkish-occupied Armenia.

Karabian graduated from Roosevelt High School in Fresno and later continued his education at the University of Southern California, where he earned a Bachelor of Arts in History, a Masters Degree in Public Administration and a Juris Doctorate from USC Law School. He was also elected Junior Class President and Student Body President, becoming one of the most successful graduates in that era.

After completing his education, Karabian served as Deputy District Attorney for Los Angeles County for two years. Soon after, Karabian became an active political figure in the Democratic Party and focused on a career in politics. In 1966, he was one of the youngest men to ever be elected to the California State Assembly and only the third American-Armenian to be elected to public office in the history of the United States.

While a member of the Legislature, Karabian published various articles and gained a reputation as a significant legal author as well as Legislator. He made substantial contributions to the development of California law concerning crime, prison reform, education, civil rights, free speech, and the preservation of endangered species in California. Notably, Karabian used his influence to bring awareness to the Armenian Genocide in California. In 1967, at a time when most people were not aware of the Genocide, Karabian authored the first resolution commemorating the Armenian Genocide in the State Assembly, paving the way for future successes through the community’s activism, including for Armenian Genocide recognition and education.

Based on the trauma endured by his mother when she was wrongly labeled as being mentally retarded as a child simply because she was unable to successfully take IQ tests in school because English was her second language, Karabian utilized his position in Sacramento to introduce legislation requiring that child IQ testing be completed in the child’s native language.

In 1972, he was selected to serve in the powerful position of Majority Leader. At the time, he was only 33 years old and became the youngest Majority Leader in California’s history. Later, he would become a member of the important Rules Committee.

Following the devastating 1988 earthquake in Armenia, all Armenian organizations in California joined together in a historic coalition to rush aid to our crippled Nation. Karabian was chosen as Chairman of the coalition which came to be known as the United Coordinating Committee for Armenian Earthquake Relief.

Karabian’s dedication to the Armenian Cause is well-known throughout the world and has had a lasting impact over the Armenian community. In addition to countless other initiatives, Karabian is a founding member of the Armenian Bar Association and the Armenian Film Foundation.

In 1988, Karabian married Laurel Dickranian at St. Sarkis Armenian Church in London. They were blessed with a daughter Madeline Araxie who is a senior at USC, double- majoring in Italian and Television Writing. His other children are Benjamin Karabian who is the Supervising Deputy City Attorney for Central Criminal Trials in the City of Los Angeles and Katharine Sarine Giovanardi. After 28 memorable years of marriage, Karabian lost his life partner when Laurel sadly passed away in late 2014. Laurel was the youngest daughter of benefactors Mr. and Mrs. Arshag and Eleanor Dickranian of Beverly Hills whose resourcefulness and dedication have positively impacted nearly every major Armenian organization both locally and abroad.

Photo: The Honorable Walter Karabian Delivers Acceptance Speech at 2015 ANCA WR Annual Gala after receiving the organization’s Legacy Award in front of over 1,400 officials, supporters, donors, and activists. On stage with Karabian from left: ANCA WR Advisory Board Members Michael Mahdesian and Levon Kirakosian, ANCA WR Board Members Arpie Jivalagian and Nareg Kitsinian, Los Angeles Councilmember Paul Krekorian who introduced the honoree as his mentor and trailblazer for Armenian involvement in politics.