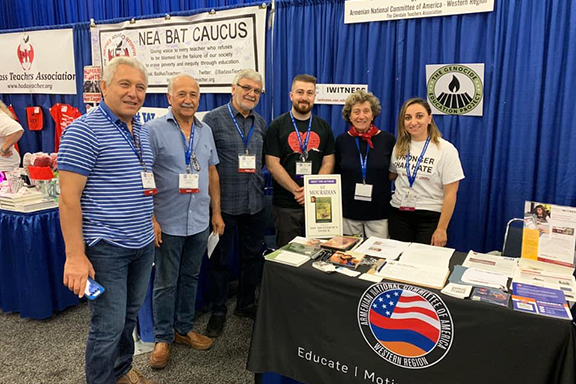 ANCA-WR Advocates for Genocide Education to Thousands of Teachers

HOUSTON—As the nation celebrated the 4th of July and the 243rd anniversary of an independent America, the Armenian National Committee of America–Western Region’s Education Committee was advocating for genocide education, and presenting resources on Armenian Genocide to thousands of educators across the country, at the 98th National Education Association Representative Assembly and 157th Annual Meeting. Representatives of the ANCA-WR Education Committee, in partnership with the Genocide Education Project and the USC Shoah Foundation, were in Houston, Texas from July 2 – 7 at the Representative Assembly.

As exhibitors, the ANCA-WR Education Committee delegation had set up a booth full of educational resources including books, documentaries, pamphlets, teaching guides, and fact sheets. Thousands of teachers in attendance of the RA, at the George R. Brown Convention Center, visited the ANCA-WR booth, picking up materials and even inquiring further about what tools can be used to best teach students of all grade levels about the Armenian Genocide.

“It’s extremely critical that the ANCA-WR Education Committee partake in conferences such as the one held in Houston last week. The compelling story of Near East Relief is an unequivocal nexus between American history and Armenian history, and brings pride to all Americans as they learn about how the U.S. stepped up to rescue countless refugees, orphans, and survivors of the Armenian Genocide. Educators across the country deserve access to the right resources to build social studies and history curricula to properly teach this topic,” remarked ANCA-WR Chair Nora Hovsepian.

ANCA-WR Education Committee member and President of the Glendale Teachers Association, Taline Arsenian was also a delegate at this convention and presented the following New Business Item to the RA:

“NEA shall use all existing digital and social media, and email newsletter to promote teaching about the Armenian Genocide by writing an article prior to April 2020 about the history of the Armenian Genocide, including American’s assistance of genocide victims and orphans through the Near East Relief. This article should include teaching resources from the Genocide Education Project, USC Shoah Foundation, and Near East Foundation.”

The ANCA-WR team was passing out a variety of educational resources including fact sheets, documentaries, and books

“I was honored to present a New Business Item requesting our nation’s largest educator union, the National Education Association, advocate for Armenian Genocide awareness and education. Acts of genocide must be acknowledged and taught in order to help students understand how such inhumanity develops, prevent its occurrence, and preclude its recurrence. When history is denied or ignored, atrocities against humanity are often repeated. I was especially proud that ANCA was an exhibitor at the National Education, Representative Assembly, to offer resources and support for Armenian Genocide education to interested educators,” remarked Arsenian. Unfortunately, the New Business Item did not pass for technical and logistical reasons.

Capitalizing on the trip to Houston, the ANCA-WR delegation met with the local activists to discuss upcoming priorities of the organization and to inquire how the Western Region could assist in the local chapter’s upcoming initiatives. The local ANCA-Houston Chapter and Armenian Youth Federation representatives also visited the ANCA-WR booth and helped out during the RA.

Around 7,000 delegates were present at the 98th annual NEA RA

The NEA is the largest labor union and professional interest group in the United States. It represents public school teachers and other support personnel, faculty and staffers at colleges and universities, retired educators, and college students preparing to become teachers.

The NEA’s Annual Meeting is the world’s largest democratic deliberative assembly and takes place during the final week of June and/or the first week of July. Various committees, constituencies, caucuses, leadership groups, and delegates from state and local affiliates gather to set policy and chart the direction of NEA business. The RA takes place during the final four days of the Annual Meeting. It is the primary legislative and policymaking body of the Association and derives its powers from, and is responsible to, the membership. The Representative Assembly adopts the strategic plan and budget, resolutions, the Legislative Program, and other policies of the Association.

This year, there were about 7,000 delegates representing state and local affiliates, student members, retired members, and other segments of the united education profession. In addition, there were another few thousand guests and exhibitors who were also in attendance.