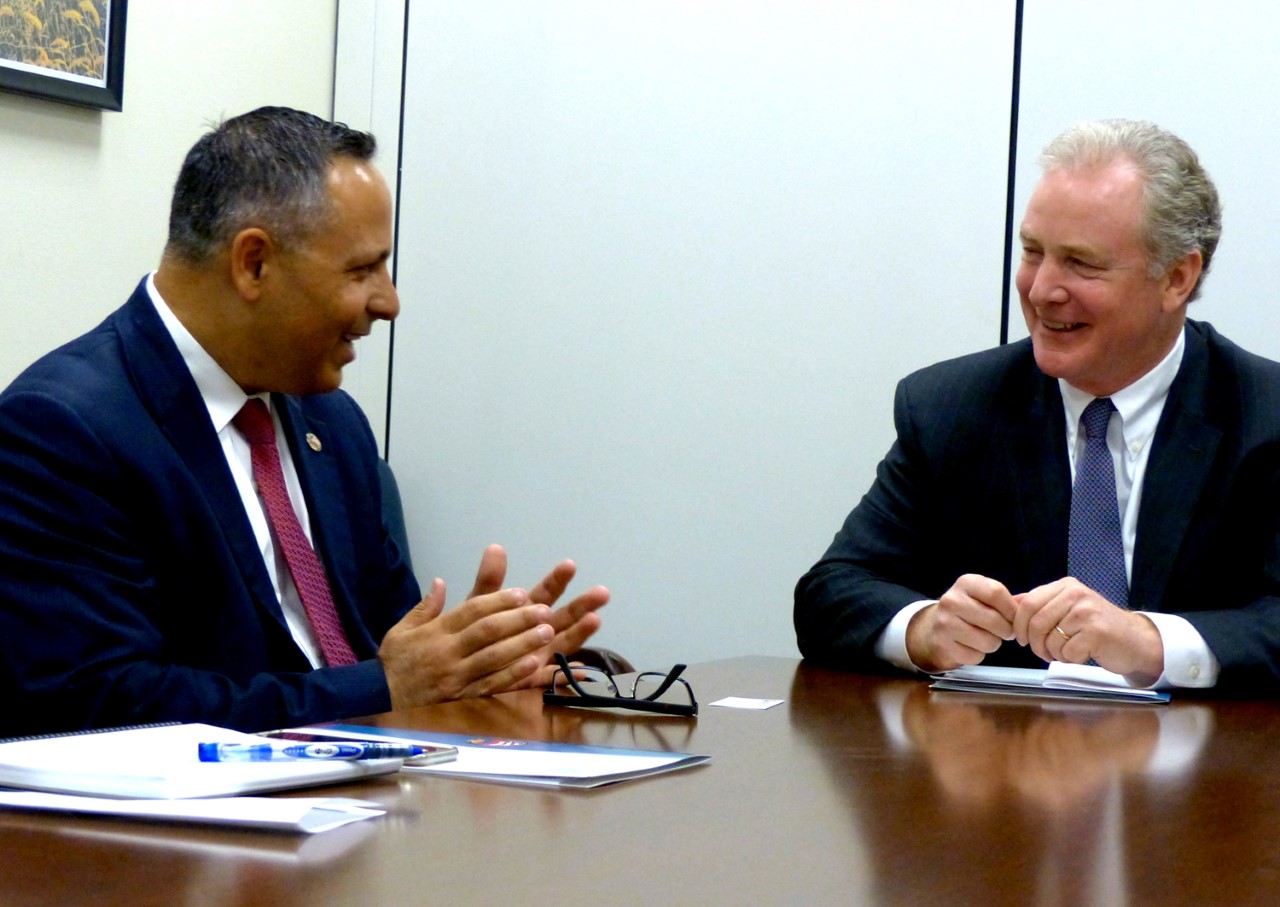 WASHINGTON, DC – Armenian National Committee of America (ANCA) Chairman Raffi Hamparian consulted this week with U.S. Senator Chris Van Hollen (D-MD), a member of the influential Appropriations Committee, about strengthening the U.S.-Artsakh (Nagorno Karabakh) relationship, including through increased travel and communications among officials as well as artists, educators, students, and other civil society stakeholders. Senator Van Hollen serves on the Senate Committee on Appropriations, Subcommittee on State and Foreign Operations, which sets funding levels for foreign aid, among other issues.

“The ANCA is proud of our decades-long relationship with Senator Van Hollen,” remarked ANCA Chairman Raffi Hamparian. “From our work in 2001 on the Maryland Armenian Genocide resolution with then-State Senator Chris Van Hollen to our work with him as a member of the U.S. House – Chris Van Hollen continues to be a stalwart friend of Armenian Americans, from Baltimore to Bethesda and across the state of Maryland.”

Senator Van Hollen, earlier this year, led efforts on the Senate side to secure continued assistance to Artsakh, a one-of-a-kind aid program, started in Fiscal Year 1998, that has provided maternal health care and clean drinking water and, is, today, funding the HALO Trust’s work clearing mines and unexploded ordnance from across Artsakh’s interior fields and farmlands. The Maryland Senator’s efforts were supported by the Ranking Democrat on the Appropriations Committee, Patrick Leahy (D-VT), and fellow appropriator Senator Marco Rubio (R-FL).

These efforts on the Senate side were matched by Armenian Caucus Co-Chair, Rep. David Valadao (R-CA), who – with the help of his Caucus colleagues – secured the passage, on September 7th of this year, of the Valadao Amendment to the foreign aid bill, H.R. 3354, appropriating funds for the completion of HALO’s demining mission. Over the past two decades, the U.S. aid program to Artsakh – initiated through ANCA advocacy – has secured over $40 million dollars in life-saving U.S. assistance to the independent republic.

The ANCA’s efforts to secure direct U.S. assistance to Artsakh dates back to May of 1997, when Congressman Brad Sherman first offered an authorization amendment, as a member of the House Foreign Affairs Committee, to the Foreign Policy Reform Act, to authorize direct U.S. funding for Artsakh. This effort lead to subsequent support, later that same year, by appropriators, notably then-senior Congressman Joe Knollenberg of Michigan, who successfully worked to ensure that the House Appropriations Committee approved a Foreign Aid bill (Public Law 105-118) that ultimately led to the allocation of an initial $12 million FY 1998 allocation for Artsakh.

Earlier this year, Senator Van Hollen secured the adoption of an amendment to the foreign aid bill opposing the use of US funds to facilitate the sale of arms to Turkish President Erdogan’s security detail. In the wake of this amendment, the proposed arms sale was withdrawn by the Administration. His support for issues of concern to Maryland’s Armenian American community dates back to his long service in the U.S. House and, prior to that, his tenure in the Maryland state legislature, where he helped lead that state’s recognition of the Armenian Genocide.