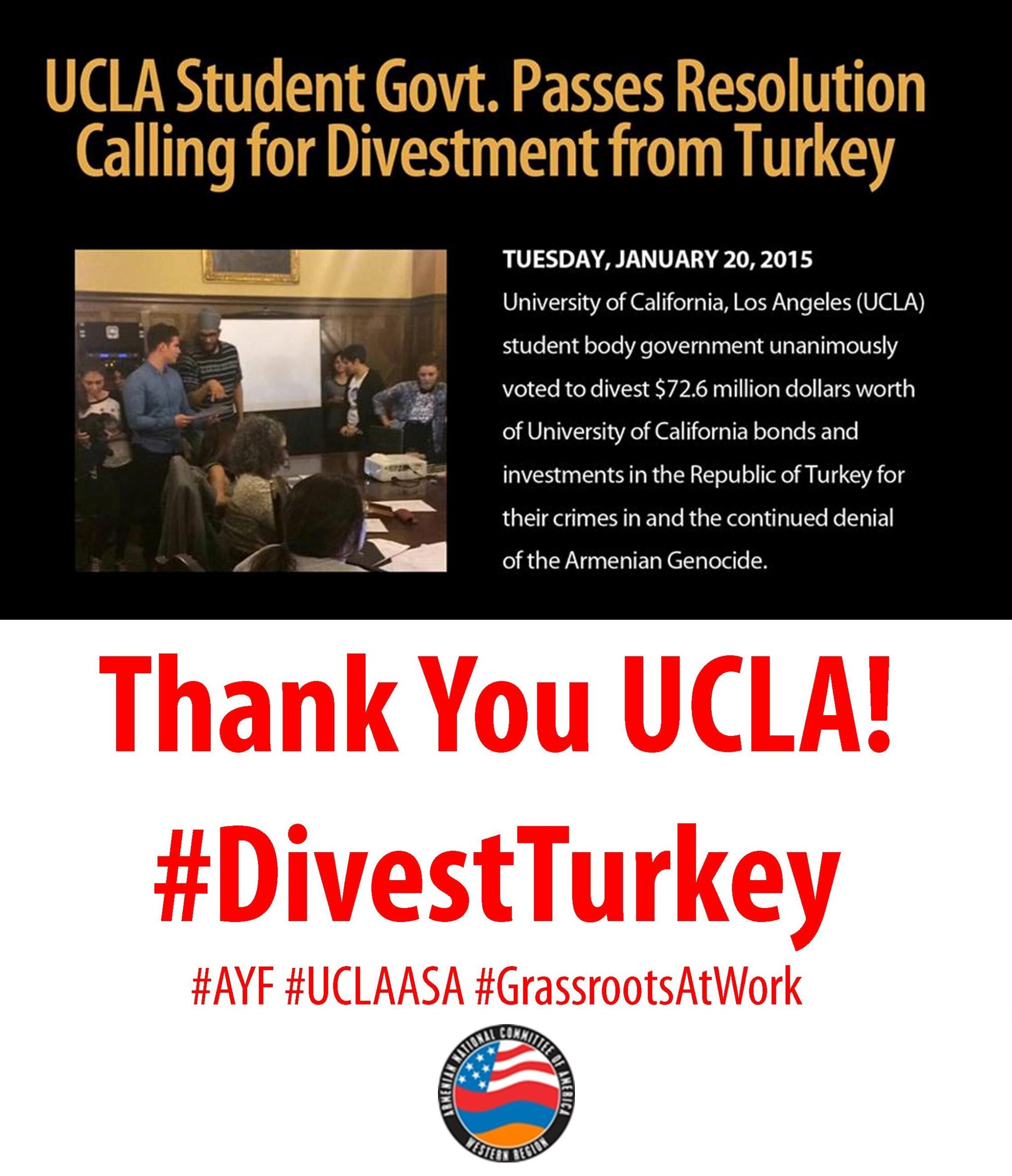 LOS ANGELES, CA – The Armenian National Committee of America – Western Region (ANCA-WR) has issued a statement praising the University of California, Los Angeles student body for voting unanimously last night to divest over $70 million in University of California funds from the Republic of Turkey due to its continued denial of the Armenian Genocide.

“The tide is turning,” remarked ANCA-WR Chairman Nora Hovsepian, after learning of the vote from leaders of the Armenian Youth Federation – Western United States (AYF). “Turkey’s denial of the Armenian Genocide is collapsing. This vote at UCLA is just the latest example of the free fall of Turkey’s genocide denial campaign. Like the demise of the tobacco lobby’s effort to deny the tie between cigarettes and cancer, Turkey’s denial of the Armenian Genocide is falling apart in front of our own eyes,” Hovsepian added.

The ANCA-WR praises all those champions of human rights, including the outstanding efforts of the AYF, the UCLA Armenian Students Association and their allies for working successfully to adopt the the UCLA resolution, entitled “A Resolution to Divest from the Republic of Turkey to End the Perpetuation of the Armenian Genocide.”

The resolution adopted last night at UCLA is part of the larger #DivestTurkey initiative spearheaded by the AYF, a grassroots community organization dedicated to justice, which will be working with campuses across the region to end university complicity in Turkey’s genocide denial.

The AYF’s press release offering additional details on the UCLA vote and the #DivestTurkey initiative is provided below.

The resolution titled “A Resolution to Divest from the Republic of Turkey to End the Perpetuation of the Armenian Genocide” passed with a vote of 12-0-0 around 10:00 pm at Kerckhoff Hall in UCLA.

The resolution is part of a larger initiative (#DivestTurkey) spearheaded by the Armenian Youth Federation Western United States (AYF)– a grassroots community organization dedicated to justice– calling on institutions to divest from the Republic of Turkey.

AYF Central Executive Board member Gev Iskajyan stated, “the #DivestTurkey initiative began in order to connect and provide resources for university students and activists on campuses across America to divest all holdings in the Republic of Turkey’s government until reparations for the Armenian genocide are met and until genocide is no longer a profitable venture. The Armenian Students’ Association at UCLA was the first organization to accept this call for divestment from the community and successfully presented this resolution.”

“Tonight demonstrates the Armenian community is not alone in its fight for justice and reparations for genocide,” explained Razmig Sarkissian, an AYF member and UCLA alumnus.

“[#DivestTurkey] is about reaffirming student agency because students were not consulted in the decision to invest in the Turkish government,” said Mikael Matossian president of the Armenian Students’ Association at UCLA. “This is a proactive step in the ethical direction, of an Armenian student-led coalition calling on our student government to take a stand against funding genocidal regimes,” continued Matossian.

“The AYF plans to expand the #DivestTurkey initiative, working with several colleges and universities in order to introduce similar resolutions in the coming weeks and months,” confirmed Iskajyan.