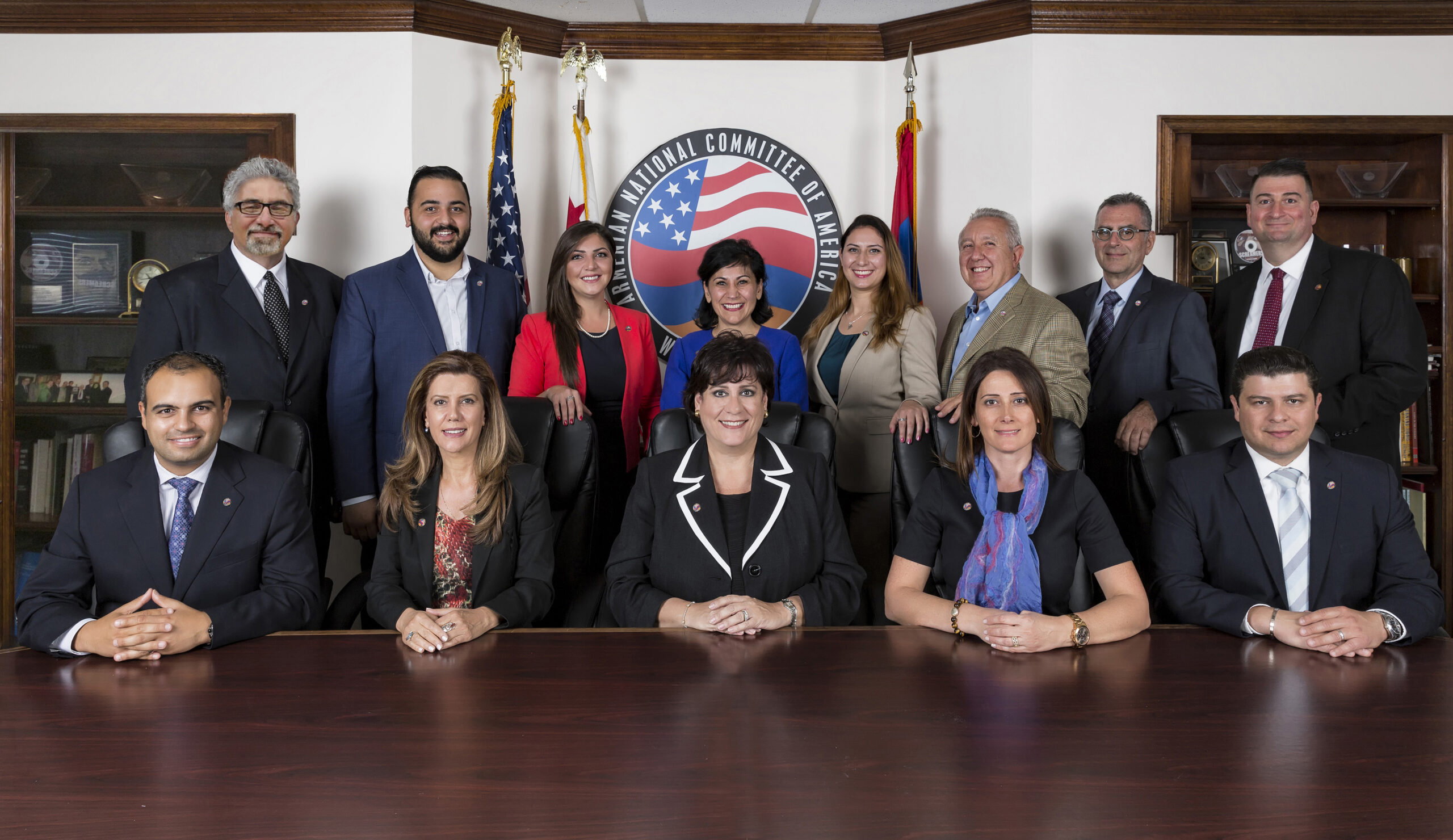 ANCA-Western Region Announces 2016-2018 Board of Directors

Los Angeles, CA – Early this week, the Armenian National Committee of America-Western Region (ANCA-WR) announced the appointment of its Board of Directors for the 2016-2018 term, consisting of an 11-member combination of returning and new volunteers:

“The new ANCA Western Region Board of Directors has gotten off to a strong start and is enthusiastically prepared to meet the many challenges facing our community in its pursuit of the Armenian Cause. Our team consists of dedicated and experienced volunteers with a wide array of professional experience, all with a common purpose and vision to strengthen our grassroots capabilities and mobilize our local chapters throughout the region, expand the financial resources needed to facilitate our work, and focus on recruiting future leaders to pursue our collective efforts through our internship programs. I am proud and humbled to serve with such a talented and committed group of Board volunteers and hard-working staff, and I look forward with optimism and excitement to reaching new heights in the coming months for our organization and our Cause,” stated Board Chair Nora Hovsepian.

The Board of Directors will be tasked with setting the policies, procedures, and goals of the largest and most influential Armenian-American advocacy organization in the western United States.

In recognition of her efforts through the ANCA to support and secure recognition of Artsakh’s independence, Nora was bestowed in 2014 with the Gratitude Award by Artsakh President Bako Sahakyan. In 2015, she was honored in California’s state capital by the California State Assembly as one of its 80 statewide Women of the Year for her leadership and advocacy on behalf of the Armenian Cause.

After traveling to Western Armenia in May 2014, Nora produced a 30-minute documentary film entitled “Journey to the Homeland” which won a 2015 Audience Choice Award in the Pomegranate Film Festival in Toronto, Canada, and was then chosen as an official selection by Los Angeles CineFest, the Los Angeles Independent Film Festival, and the IndieFEST. The film and its 2016 updated Director’s Cut both depict the post-Genocide condition of many Armenian villages, monasteries, churches and other antiquities in what is currently known as Eastern Turkey and may be viewed at www.WesternArmenia.org.

Hermineh Pakhanians, elected as the Treasurer of the ANCA-WR Board of Directors, served as the co-Chair of ANCA-WR’s “America We Thank You: An Armenian Tribute to Near East Relief,” committee. Hermineh is a retired partner of one of the Big Four international accounting firms, where for twenty-five years she provided financial audit services, specializing in real estate companies. Hermineh is a CPA and graduated from the University of Southern California, with a Bachelor of Science degree and a Master of Business Administration degree. She is the treasurer and past president of the Armenian Educational Foundation and Board member of Armenian American Business Council.

Souzi Zerounian-Khanzadian, elected as Secretary of the ANCA-WR Board of Directors, is a long-time member of the ANCA family, having served since 1995 and holding numerous positions for various projects, including the Armenian National Committee of America-Western Region Board, ANCA Telethon Committee, and the ANCA Pasadena Chapter. Over the years she has also served the Armenian community through her work in the Armenian Youth Federation and the Armenian Relief Society. Souzi is a graduate of CSULA with a degree in Finance. She started her career as a financial analyst for Transamerica. Since then, she has developed, expanded and manages a multi-location franchise operation in the oil industry. Souzi was also a co-founder of the Los Angeles Yerevan Sister City Association (LAYSCA), an organization that promotes friendly ties between Los Angeles and Yerevan.

Steve Artinian is reappointed for his 4th term on the ANCA-WR Board of Directors, where he previously served as Treasurer. Professionally, Steve is Vice President of Marketing for a national home organizing company with locations throughout the US and Canada. Organizationally, Steve has served 4 years as Chairman of Homenetmen Western USA, Chairman of the 2014 ANCA National Telethon Committee, Chairman of the historic 2015 March for Justice Marketing/PR committee and the 2015 ANCA-WR Banquet committee. Steve sits in several committees for the Western Prelacy, Homenetmen WR, ARS WR, ANCA-WR, the ACF, the Armenian Bone Marrow Registry and the Glendale Adventist Medical Center Community Advisory Board.

Born in Beirut, Lebanon, Sako Berberian moved to Los Angeles in 1975. He received his Bachelor of Arts in History from UCLA and his MBA from UC Irvine. As Vice President of Levon Travel, he was instrumental in establishing the travel agency’s offices in Tbilisi, Georgia and Yerevan, Armenia. Since 2001, he has operated Craters & Freighters franchises, serving the Los Angeles specialty packaging and transportation markets. Sako has been involved and active in various Armenian organizations. He has served on the following boards: AYF Central Executive, Horizon TV, Hamazkayin Western Region Central Executive, Chairperson of Rose and Alex Pilibos School Board, Co-chair of the Western Prelacy Board of Regents. He is an avid enthusiast of Armenian Theater and over the years, has taken numerous leading roles in many of Vahe Berberian’s Experimental Theater as well as Hamazkayin’s Arvest group. He is married to Rebecca Berberian and has two daughters, Alique and Lori.

Berdj Karapetian has extensive experience serving on the boards of Armenian and American advocacy and trade organizations. He is the founding Executive Director of the ANCA and served in the same capacity in the Western Region. Karapetian is the CEO of health care facilities for seniors in Southern California.

Joseph Kaskanian is a graduate from Cal Poly Pomona with a degree in International Business and Marketing. Prior to getting involved in the ANCA, Joseph has been an active member of the Armenian Youth Federation. He has been part of organizing many community activities including the March for Justice and ANCA Grassroots Conference. Joseph plans to continue his studies by achieving his masters degree in business administration.

Serving his sixth term on the Board of Directors for the ANCA-Western Region, Raffi Kassabian has been active with the ANCA for over 13 years. Raffi is an attorney at one of the twenty largest global law firms in the world where he practices commercial and business litigation and represents the leading financial services institutions in the United States. He received his Bachelor of Arts degree in Political Science and Communication Studies from UCLA in 2005 and earned his Juris Doctorate degree from UCLA in 2008. In addition to practicing law, Raffi has been a lecturer at UCLA since 2010 where he teaches First Amendment law to undergraduate students. Raffi currently lives in Pasadena, California.

Nareg S. Kitsinian, Esq. is serving his second term on the ANCA-WR Board. He has previously served four years as Chairman of the ANCA San Fernando Valley West Chapter and has been active in the ANCA for over 14 years. He is the founder of the Kitsinian Law Firm where he practices civil litigation with a focus on personal injury, premises liability and pharmaceutical liability. He is a graduate of Loyola Law School in Los Angeles where he received his Juris Doctor Degree in 2004. Outside of his practice, Nareg is an active participant in his community. In 2008, Nareg was elected to serve as the Planning and Land Use representative on the Encino Neighborhood Council. In 2012, Nareg was honored by the Los Angeles City Council for his dedication to human rights education and in bringing a wider awareness to the Armenian Genocide.

Ashod Mooradian, Esq. is a lifelong activist in the Armenian Community and has been an active member of the ANCA San Gabriel Valley chapter since 2010. Ashod was born and raised in Montebello and is the founder of the Mooradian Law Firm. In 1992, Ashod received his B.S. in Business Administration from the University of Southern California and in 1995 he received his Juris Doctor Degree from Southwestern University School of Law in Los Angeles. During his term on the ANCA Western Region Board Ashod will serve on the Grassroots Development Committee, among other assignments. Currently, Ashod serves on the Board of Trustees of the Armenian Apostolic Holy Cross Cathedral and volunteers as the head attorney coach for the Armenian Mesrobian High School Mock Trial team.

Recently anointed as an ANCA-WR Board member, Anahid Oshagan’s decades long activism as a member of the ANCA family began as a Washington, DC intern in 1988. After receiving her undergraduate degree from CSUN in English Literature and Humanities, Anahid taught English as a Second Language to refugees. She then attended Whittier College School of Law and also studied Comparative European Union Law at Facultat Dret in Barcelona, Spain. Anahid’s extensive activism includes serving as ANC-WR TV and ANCA-WR Telethon host, running for Glendale City Council, serving on the boards of the Glendale YWCA and Glendale Ghapan Sister City organization. For the Armenian Genocide Centennial, Anahid served as project coordinator for the largest public art installation in Grand Park in Los Angeles. And as an integral part of the iWitness Project, Anahid helped secure the City of Los Angeles’s first permanent monument dedicated to the Armenian Genocide located in downtown’s Grand Park.

Currently, Anahid practices law in Glendale. In 2009, Anahid received the Armenian American Chamber of Commerce Women in Law award. In her spare time, she is an assistant coach for American Youth Soccer Organization. Anahid met her husband Ara at a demonstration at UCLA against a Genocide denying history professor. Together, they have four boys, all of whom are being groomed as ANCA activists: Sebouh, Adom, Shahan and Aren.

To learn more about the ANCA-WR activities and staff visit the about section of the organization’s website at www.ancawr.org . For up to the minute updates follow ANCA Western Region on social media: facebook.com/ANCAWesternRegion, Twitter and Instagram: ANCA_WR.