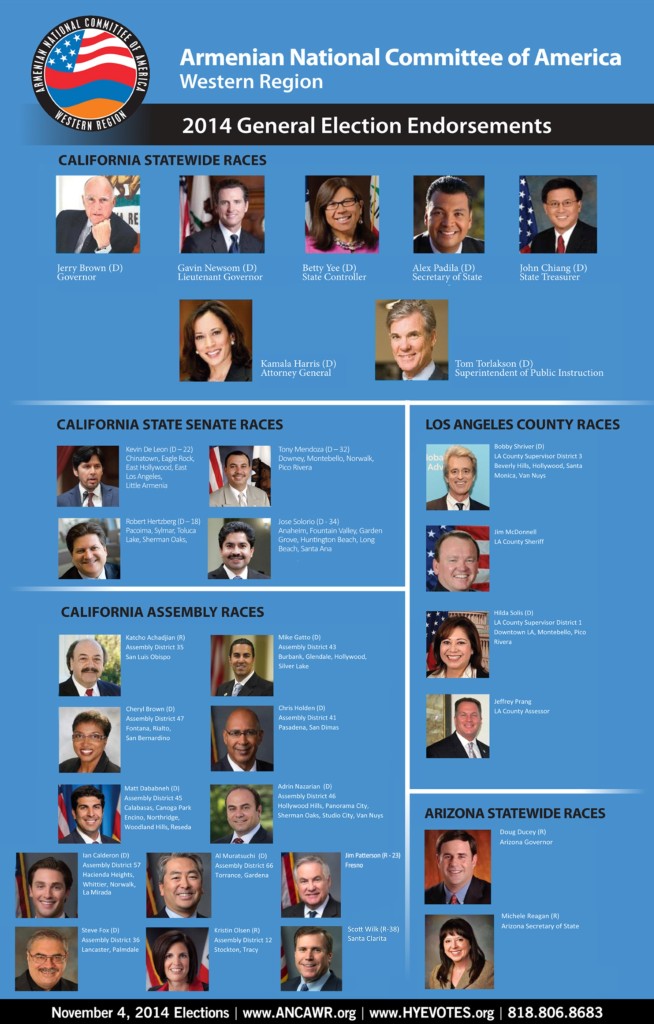 The Armenian National Committee of America Western Region (ANCA-WR) is proud to announce its 2014 General Election endorsements, helping Armenian Americans demonstrate their electoral strength to those federal, state, and local candidates who have proven their ability and intention to best serve the communities they will represent.

“It is our mission to continue to empower Armenian American voters to cast informed votes at the ballot box on November 4,” remarked ANCA-WR Chair, Nora Hovsepian. “These endorsements are largely based on candidates’ responses to our questionnaires, detailed in-person interviews, and our conclusion that the endorsed candidates are in the best position and have shown the greatest commitment toward supporting issues important to the Armenian American community.”

Armenian American voters across the United States are urged to exercise their right to vote in the General Election on November 4th and lend their support to the candidates who have been steadfast advocates of the Armenian Cause. Many of the elections taking place are going to be won by a very slim margin. It is imperative that every eligible citizen cast his or her vote in this General Election. The ANCA-WR seeks to maximize the value of each individual vote and launched the Hye Votes initiative in 2012 toward that goal, registering thousands of new voters and encouraging all voters to cast their timely ballots. Today, its dedicated team of volunteers and coalition partners are still working tirelessly to ensure high voter turnout among the Armenian-American community.

The 2014 General Election will take place on November 4, 2014. In order to vote, you must be registered. The ANCA-WR urges community members who are U.S. citizens and over the age of 18 not yet registered to vote, to register by the October 20, 2014 deadline. To register to vote online, request a vote by mail ballot or obtain additional information, contact ANCA WR Hye Votes office at (818) 806-8683, or visit www.hyevotes.org.

The ANCA federal level endorsements will be released in the coming week. Endorsements are based primarily on ANCA Congressional Report Cards, a detailed review of each incumbent’s record across a broad range of Armenian American issues. Report Cards, prepared in consultation with regional leaders and local ANCA chapters across the country, cover issues ranging from securing justice for the Armenian Genocide and the strengthening U.S.-Armenia relations to defending Nagorno Karabakh’s independence, and increasing U.S. aid and trade levels. To view the ANCA report cards visit http://www.anca.org/legislative_center/election_reportcards.php