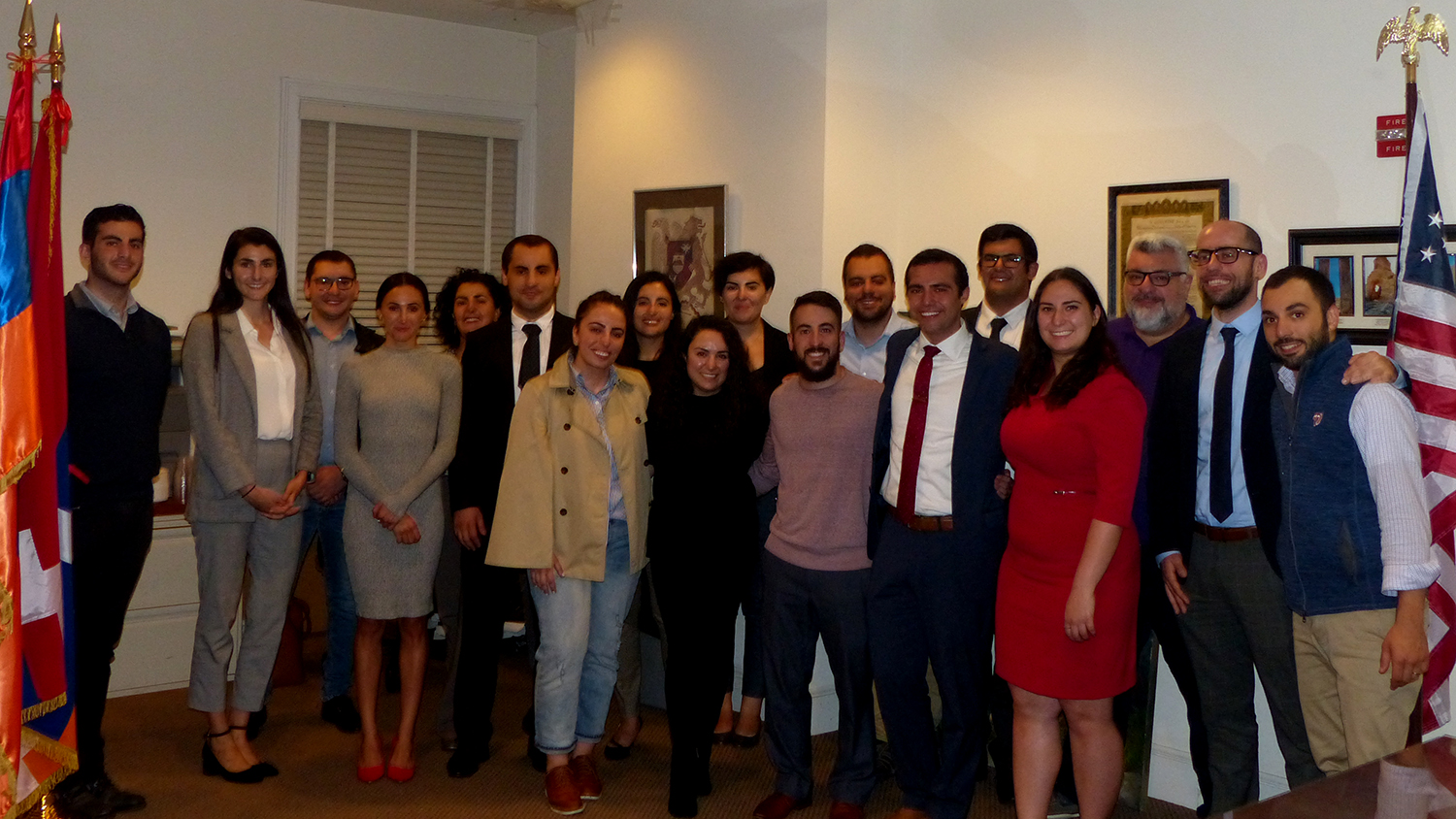 WASHINGTON, DC – A stellar group of public policy graduates from universities across the U.S. and as far away as China have arrived in Washington, DC as the Armenian National Committee of America (ANCA) kicks off its Fall 2018 session of the Hovig Apo Saghdejian Capital Gateway Program.
]

These young professionals, who hold degrees ranging from Bachelors to PhDs, are part of the growing pool of Armenian Americans seeking public policy, political, media, and development positions in the nation’s capital.

“Heading into the Fall, we’re impressed by the incredible talent of our latest class of Fellows and eager to help these goal-oriented graduates start their careers in our nation’s capital,” remarked ANCA Program Director Tereza Yerimyan. “We are proud of the successful placements of our past fellows and are encouraged by the continued engagement of program alumni in ‘paying it forward,’ as seminar leaders and mentors.”

Yerimyan and the CGP Advisory Committee – comprised of program veterans – coordinated two weeks of intensive seminars focusing on resume development, cover letter writing, interviewing and networking skills, culminating in a “meet and greet” mixer with DC area professionals earlier this week. CGP fellows are now in the process of applying to jobs on Capitol Hill, with think tanks and a range of consulting companies.

“The network that the ANCA has created for us is invaluable. I never expected such a proactive effort from the alumni towards making sure the Gateways get to where they want to be,” said Lucine Mikhanjian, who also recently completed the ANCA Leo Sarkisian Internship Program. “The community’s support and resources have made me much more confident during my job hunt, and I’m inspired to do the same for the next cohort.”

Mariam Matevosyan concurred, noting, “apart from being an individually-oriented, strong professional development program, the Hovig Apo Saghdejian Capital Gateway Program is an inspiration and motivation of impressive scope and depth. The design and training, as well as the general work environment and professional ethics at ANCA, provide an invaluable daily learning opportunity. I know I will succeed, as I have these people at my side and it is only natural that I want to support them any way I can,” concluded Matevosyan.

“The Congressional Armenian Staff Association (CASA) is an official, non-partisan, bicameral staff association whose mission is to recruit, retain, and advance Armenian American staffers in the U.S. Senate and U.S. House of Representatives,” explained Matevosyan. “CASA is dedicated to encouraging career development and to serve as a resource to its members and those who seek opportunities on the Hill. Through our collective efforts, we hope to grow the number of Armenian Americans working on Capitol Hill.”

Grigoryan concurred, noting, “I am happy to have the honor of serving as a co-chair for CASA. A young professional’s journey in their career is often influenced by the people he or she meets. In my position, I strive to encourage Armenian professionals, whether they are new to D.C. or consider themselves a native, to always be open to learning from those around them. CASA serves as a platform for these encounters. Whether it be through professional development panels or networking activities, I believe every CASA member and alum can greatly benefit from involvement.”

The ANCA Capital Gateway Program offers fellows three months of housing at the ANCA Aramian House, career-building workshops and networking opportunities. Applications for the Winter 2019 session, which begins on January 7th, are due by November 15th and are available at anca.org/gateway. In addition to recent graduates, the ANCA CGP also serves university students interested in Washington, D.C. internship opportunities– both at the ANCA offices and various governmental agencies, space permitting.

The ANCA CGP is named after Hovig Apo Saghdejian, a beloved young community leader who lost his life in a tragic car accident and whose eternal memory continues to inspire new generations of Armenian Americans. His family generously established the Hovig Apo Saghdejian Memorial Fund in his memory and, over the past decade, has played a vital role in the expansion of the program. Substantial support has also been provided by the Aramian Family, Kirk Kerkorian’s Lincy Foundation, Gerry Cafesjian, Julian and Annette Setian, the Norman K. Miller Charitable Fund, Frank and Barbara Hekimian, and the Armenian American Veterans Post of Milford, Massachusetts.

The 2015 purchase of The Aramian House was made possible through a generous donation by the family of the late community leader and philanthropist Martha Aramian of Providence, R.I. The Aramian family—led by sisters Sue, the late Margo, and the late Martha—have long been among the most generous benefactors of ANCA programs as well as of charitable projects in the Armenian homeland and the diaspora.