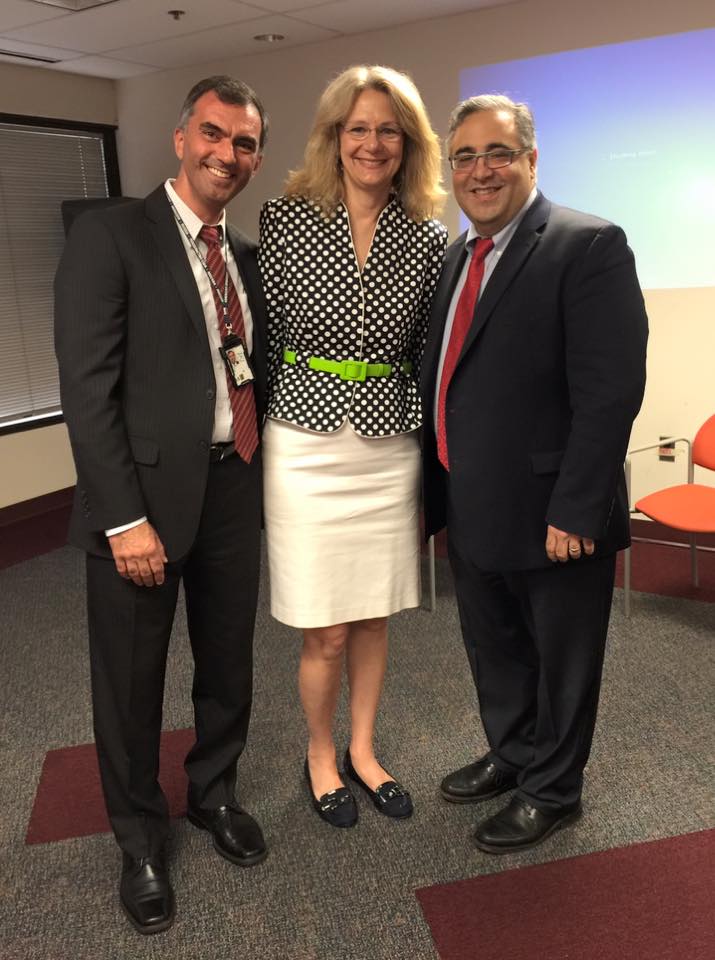 The ceremony, which was officiated by Thomas Melia, USAID’s Assistant Administrator for Europe and Eurasia, featured remarks by Amb. Hovhannissian about the importance of USAID to the development of U.S.-Armenia ties over the past quarter century. Ms. Grieser’s longtime friend, Monica Stein-Olson, a senior USAID official herself, offered heartfelt words of support and inspiration prior to formally administering the official oath of office.

“We are pleased to see that USAID – in appointing Deborah Grieser to serve as our Mission Director in Yerevan – is, once again, sending our country’s best and brightest to strengthen the powerful and enduring bonds between the United States and Armenia,” said ANCA Executive Director Aram Hamparian, following the ceremony. “We were pleased to have a meaningful opportunity to share with her our serious concerns about the future of the U.S. aid program for Nagorno Karabakh, and also to explore how we can, as Americans, do a better job of helping Armenia provide a safe and sustainable home for those fleeing Syria. We wish her well in her work and look forward to remaining actively engaged in USAID’s vital efforts in Armenia.”

Deborah Grieser, a career member of the Senior Foreign Service, will serve as Mission Director for Armenia beginning in July, 2016. She has served as Director of the USAID Europe and Eurasia Bureau’s Technical Support Office since 2013, responsible for oversight of the Bureau’s Washington-based regional portfolio of programs in Democracy and Governance, Economic Growth, Energy, and Health. From 2010-2013, she served as Director of the Office of Sudan and South Sudan Programs. Ms. Grieser served as USAID Deputy Mission Director in Uganda from 2007 to 2009, and in a variety of posts overseas as a Mission Controller. In 2010, Ms. Grieser earned a master’s degree in National Security Strategy from the National War College at the National Defense University. Prior to beginning her public service as a Peace Corps volunteer, Ms. Grieser worked for Ernst & Young in Chicago.

In the weeks prior to her swearing in, Ms. Grieser visited the ANCA offices in Washington for a discussion about Armenian American foreign aid priorities. Key among the issues discussed were the expansion of assistance to Nagorno Karabakh to continue de-mining efforts and support new rehabilitation programs for children and adults with disabilities. The ANCA also underscored the urgent need for U.S. leadership – both bilaterally and internationally, through UNHCR and other agencies – in providing Armenia with sufficient resources to transition the most vulnerable of those seeking refuge from Syria in Armenia.

The full set of ANCA foreign aid priorities is included in testimony submitted earlier this year to the House and Senate appropriations subcommittees responsible for foreign operations.

— At least $5 million in U.S. developmental aid to Nagorno Karabakh, with special focus on expanding the Lady Cox Rehabilitation Center in Stepanakert, a regional clinic serving over 1,000 children and adults with physical and mental disabilities every year.

— At least $40 million in U.S. economic assistance to Armenia, targeted to growing the U.S.-Armenia trade and investment relationship.

— At least $10 million in emergency aid to help Armenia provide transition assistance to the nearly 20,000 people who have fled to Armenia from Syria and elsewhere in the Middle East.

— At least 10% of U.S. assistance to Georgia to be used for job creation programs in the Samtskhe-Javakheti region of that country.

— Ending the exclusion of the Republic of Nagorno Karabakh from the peace process.