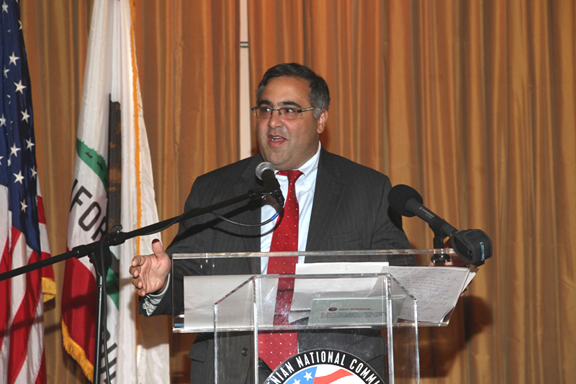 ANCA Open Letter To State Legislators About Azerbaijan Take a Stand against Foreign Interference in American Civic Life by Corrupt Azerbaijani Dictator Ilham Aliyev Dear U.S. State Legislator: I am writing to alert you that Ilham Aliyev, the President of Azerbaijan (an oil-rich and corrupt one-family dictatorship), is pressuring state legislatures across our country into joining his angry and increasingly violent attacks upon his Christian Armenian neighbors. Azerbaijan has been run by the Aliyev family for the better part of the past half century. Its current President, the son of a KGB general, has become a billionaire on a civil service salary and is often listed as the single most undemocratic leader in the world. His personal wealth and his government’s corruption were both highlighted in this CNBC progam: “The Aliyev Family of Azerbaijan.” President Aliyev is best known around the world for the scandal surrounding his pardon and promotion of a convicted axe-murderer, after this confessed killer happily admitted to hacking to death an Armenian student (while he slept) during a NATO peace program in Hungary. This shameful act was sharply condemned by President Obama. Azerbaijan’s human rights record, among the worst in the world, is documented annually in our State Department’s human rights reports. This one-page provides basic background about his record as President. It is truly a tribute to our great American democratic tradition that even a regime as flagrantly corrupt as Ilham Aliyev’s is allowed to operate freely within our open society. But that does not mean that American citizens need to remain silent in the face of meddling by foreign leaders who neither respect our rights nor share our values – especially when they try to export their intolerance to our shores. It would risk public embarrassment for any state legislature to be perceived, in any manner, as somehow serving the foreign interests of a corrupt dictator. The Washington Post and Politico, among other media outlets, have reported extensively about scandalous charges of Azerbaijani influence over U.S. policymakers – past and present. In fact, a previous Presidential nominee for Ambassador to Azerbaijan was blocked by the U.S. Senate due, in large measure, to concerns regarding reports of unacceptable relationships with Azerbaijani officials. It is in the spirit of our American democracy that I ask you to ensure that this foreign dictator is not allowed to hijack your state legislature in his hateful campaign against the Republic of Armenia and the free people of the Nagorno Karabakh Republic. I respectfully suggest that you tell President Aliyev: “Fix your own democracy, instead of trying to interfere in ours!” I very much appreciate your consideration of my concerns. Sincerely, Aram Suren Hamparian Executive Director Armenian National Committee of America