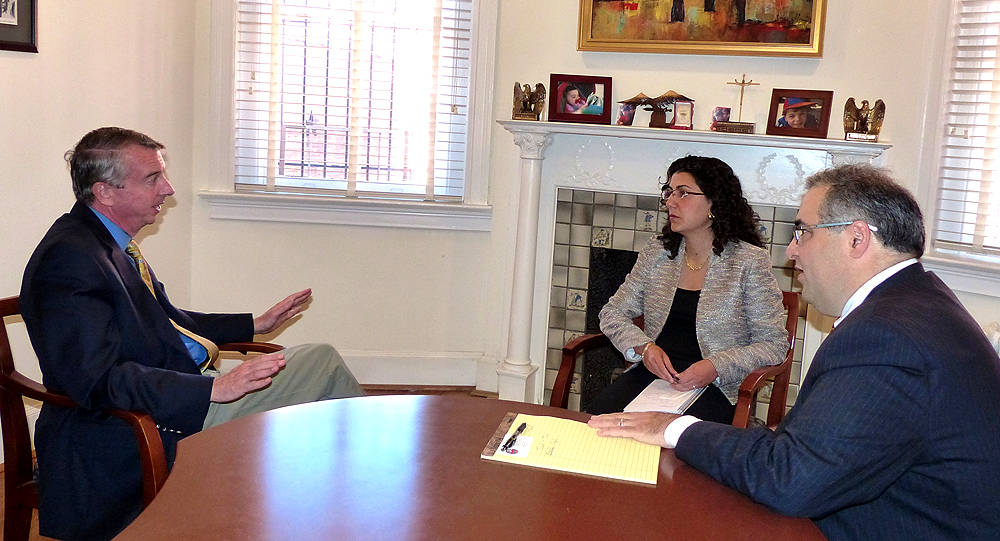 — Affirms that “the Armenian Genocide of 1915 is an indisputable fact.”

— Pledges to visit Armenia as part of a Congressional Delegation during his first term in the Senate.

“Knowing Ed Gillespie personally and having worked with him in the past, I warmly welcome the letter. It is a wonderful addition to have a supporter and strong ally on our side such as Ed. I look forward to our continued engagement and deepening collaboration on issues of Armenian American concern with him for he years to come,” said Richmond community leader and ANCA-Virginia activist Melanie Kerneklian.

“We appreciated our very thoughtful dialogue with Ed Gillespie during his visit to the ANCA, deeply value his stands on Armenian American issues, and look forward to widely sharing his view with concerned voters throughout the Commonwealth who care about Armenia,” said ANCA Executive Director Aram Hamparian.

Gillespie’s opponent, incumbent Senator Mark Warner, supported Armenian issues as Governor, but, during his six-year tenure on Capitol Hill, has not taken any pro-active steps on public policy issues of special concern to Americans of Armenian heritage.

Gillespie has served as Chairman of the Republican National Committee and as Counsel to President George W. Bush.

The full text of Gillespie’s letter is provided below.

TEXT OF MR. GILLESPIE’S LETTER TO THE ANCA

It was a pleasure meeting with you and Ms. Kate Nahapetian on Monday October 27, 2014.

I appreciate our discussion on Armenian issues and relations with the United States. I agree that the Armenian Genocide in 1915 is an indisputable fact and believe reconciliation of the horrific and sad event would do much to improve relations throughout the region. I am also concerned about infringements and confiscation of Armenian, Syriac and Greek Orthodox churches and artifacts by Turkey. As a Catholic whose faith is important to me, I would stand with Congressman Edward Royce in raising awareness and call for the return of properties to their rightful owners. Lastly, I am troubled about the ongoing Nagorno-Karabakh conflict and would be engaged on seeking a peaceful settlement and would encourage the U.S. Government to continue facilitating its conclusion.

In addition to being involved on these important issues, I would promote opportunities to deepen U.S-Armenian economic ties. I would work with the U.S. Government to promote trade agreements and the development of a new tax treaty between the U.S. and Armenia to end double taxation. In addition, I pledge during my first term to visit Armenia as part of a Congressional Delegation to see first-hand this growing and important partner in the region.

Mr. Hamparian, thank you again for your time. I look forward to working with you and the Armenian National Committee.