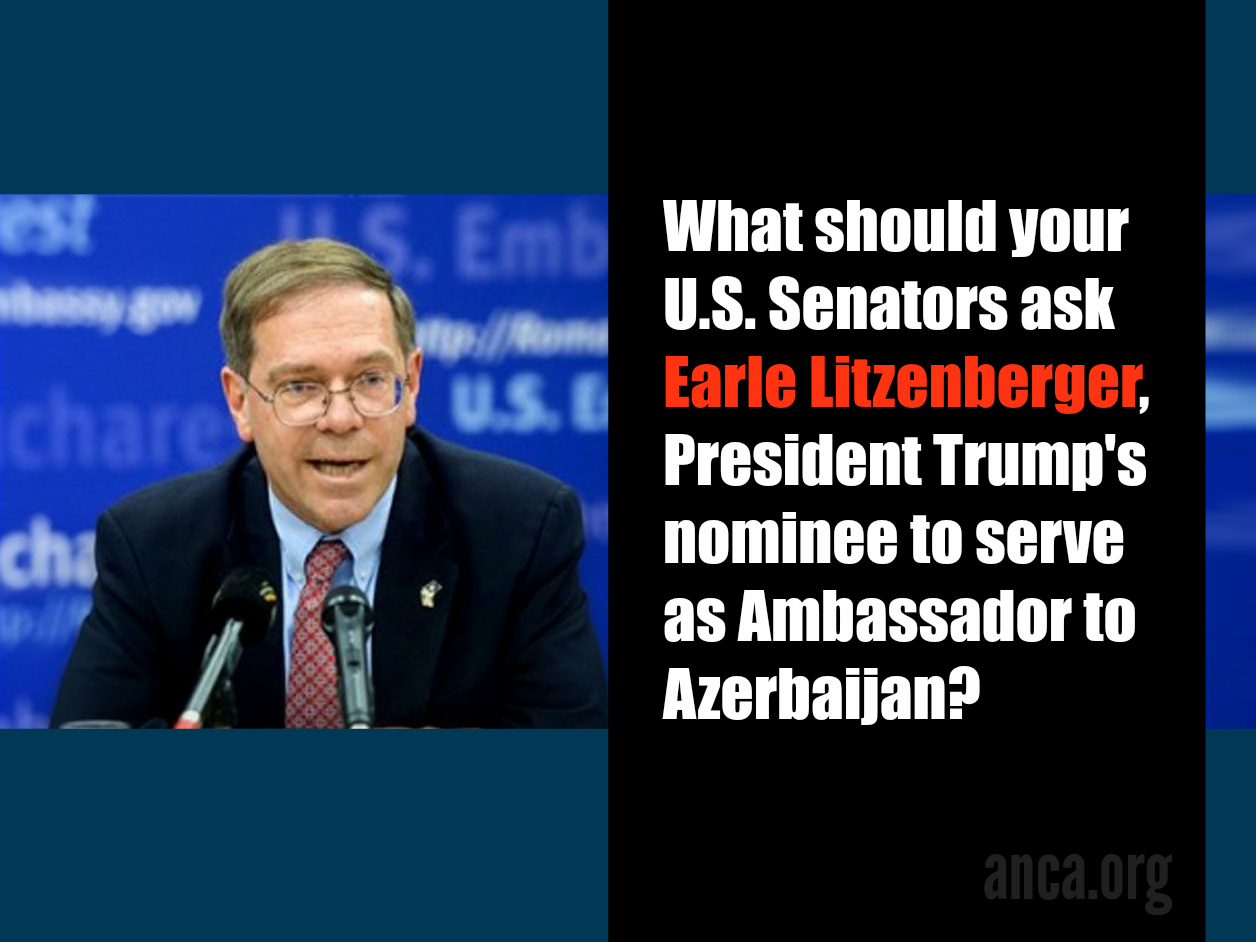 — Activists Nationwide are Urging their Senators to Ask the Tough Questions

WASHINGTON, DC – Armenian Americans, friends of Armenia, human rights activists, and advocates for peace are calling on their U.S. Senators to carefully scrutinize President Trump’s nomination of career Foreign Service Officer Earle Litzenberger to serve as Ambassador to Azerbaijan, as part of an Armenian National Committee of America (ANCA) nationwide advocacy campaign.
]
The Senate Foreign Relations Committee is set to begin consideration of Litzenberger’s nomination to fill the currently vacant posting, a process that will include a hearing, responses to written questions, and then, potentially, votes in committee and by the full Senate. President Obama’s nominee for the post, Matt Bryza, was twice denied Senate confirmation as U.S. Ambassador to Baku, over concerns regarding his evident bias on Azerbaijan, Turkish and Armenian issues, ultimately only serving one year in this position under a recess appointment.

The ANCA website – www.anca.org/azerbaijan – provides concerned individuals an opportunity to directly request that both of their U.S. Senators ask questions during the Litzenberger confirmation process.

“There’s never been a more urgent need for clarity regarding the nature and scope of American relations with the Aliyev regime,” said Aram Hamparian, Executive Director of the ANCA. “This confirmation process provides a much-needed opportunity for substantive Congressional oversight of an increasingly troubled U.S.-Azerbaijan bilateral relationship, characterized by escalating aggression against Armenians, a worsening crackdown on dissent, and a well-funded campaign to manipulate the American political process.”

Traditionally, U.S. Senators have focused their questioning of U.S. Ambassador-designates to Azerbaijan on an array of regional priorities, including the peace process, investigative mechanisms, and strengthening the cease-fire, as well as domestic concerns regarding the Aliyev regime’s crushing of dissent.

Litzenberger earned a B.A. from Middlebury College and M.S. from the United States Army War College. He is the recipient of the Matilda W. Sinclaire Language Award. He also speaks French, Russian, Serbian, and Bulgarian