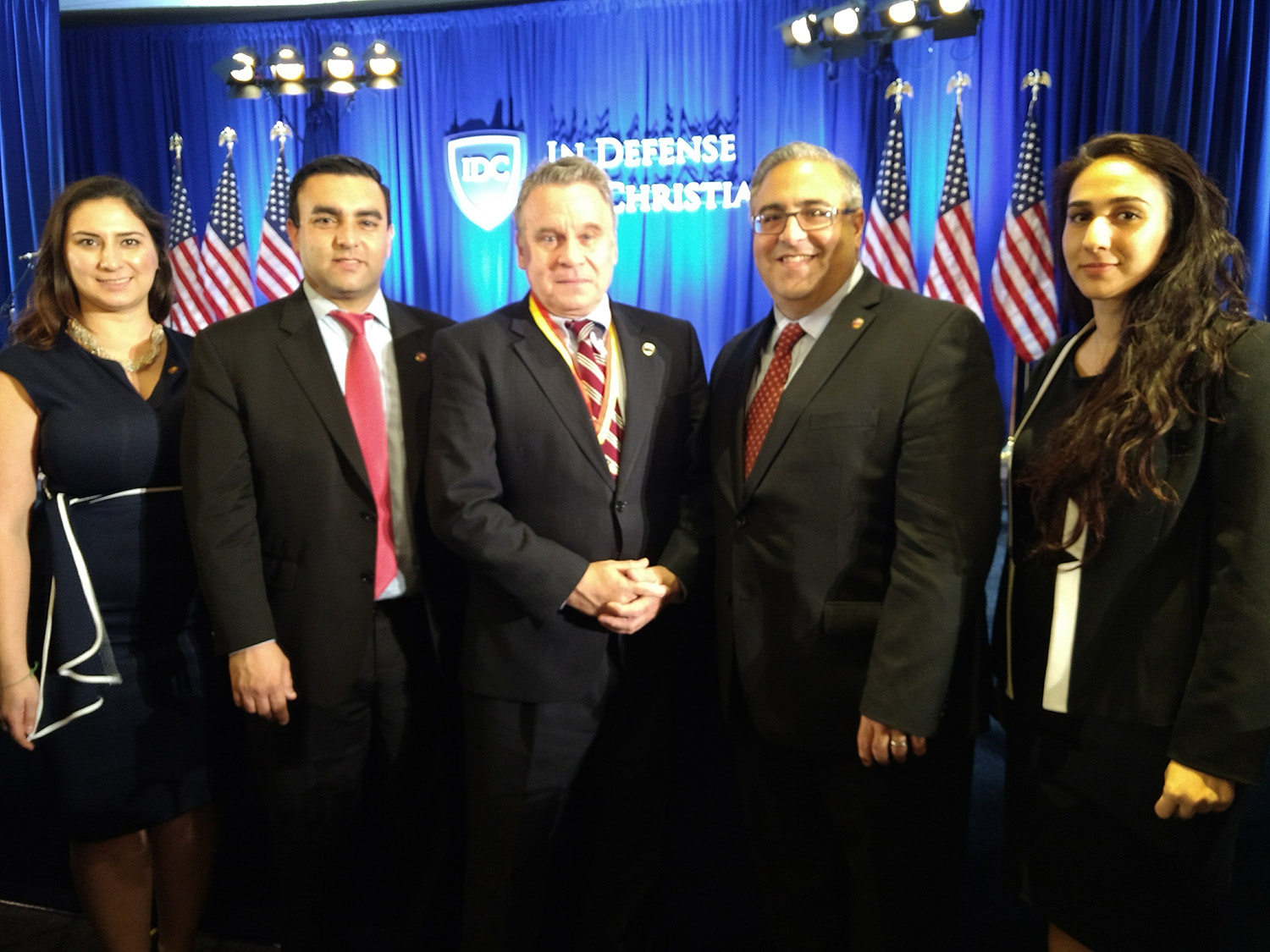 WASHINGTON, DC – The Armenian National Committee of America (ANCA) will, once again, serve as a major sponsor of the In Defense of Christians (IDC) National Leadership Conference, to be held September 10-11th, in Washington, DC.  During this national gathering, prominent faith leaders will join human rights advocates from across the United States in urging elected officials to take concrete action to preserve Christianity in the Middle East.

“The ANCA is proud to be a sponsor of the In Defense of Christians National Leadership Conference,” remarked ANCA Government Affairs Director Tereza Yerimyan. “IDC has accomplished so much over the past six years in shaping U.S. policy regarding the plight of Christians and other vulnerable minorities in the Middle East. The ANCA is pleased that the conference will once again advocate for – as a major policy goal – Congressional passage of the Armenian Genocide Resolution,” added Yerimyan.

U.S. Senate and House Armenian Genocide legislation (S.Res.150 and H.Res.296) aim at establishing, as a matter of U.S. policy, 1) the rejection of Armenian Genocide denial, 2) ongoing official U.S. government recognition and remembrance of this crime, and 3) the importance of education about the Armenian Genocide in preventing modern-day atrocities.  Over 100 U.S. Representatives have cosponsored H.Res. 296, which was spearheaded by Representatives Adam Schiff (D-CA) and Gus Bilirakis (R-FL).  The Senate version, led by Senators Bob Menendez (D-NJ) and Ted Cruz (R-TX), currently has 18 cosponsors.  The ANCA supports immediate consideration and passage of both measures.

The IDC National Leadership Conference – titled “Fighting for Equality, Freedom, and Security” – will begin on the evening of September 10th, with a VIP reception and annual Solidarity Dinner to be held at The Hamilton LIVE.  The next day (September 11th) the conference will feature a National Advocacy Day on Capitol Hill, where participants will meet with members of Congress to highlight the plight of Christians and other minorities across the Middle East.  ANCA Executive Director Aram Hamparian will be among speakers at the breakfast panel on September 11th.

The ANCA’s cooperation with In Defense of Christians dates back to their inaugural conference in 2014 when His Holiness Aram I, Catholicos of the Great House of Cilicia, joined with Christian leaders from throughout the Middle East, offering a powerful call for unity in the face of the existential threat against historic Middle Eastern Christian communities. Video of His Holiness Aram I’s remarks is available at:
https://youtu.be/JkfG0cZ0_hg

The ANCA worked closely with IDC and a coalition of over 100 organizations, including the Knights of Columbus, the International Religious Freedom Roundtable and the Prelacy of the Armenian Apostolic Church, in a grassroots campaign to have Congress and the Obama Administration declared the slaughter that Christians and other minorities in the Middle East are facing a modern-day genocide.  In March 2016, with a vote of 393 to 0, the U.S. House of Representatives unanimously condemned as genocide the ongoing ISIL/Da’esh crimes against Christians – including Armenians and Assyrians – as well as Yezidis and other religious minorities in the Middle East by adopting H.Con.Res.75, spearheaded by Representatives Anna Eshoo (D-CA) and Jeff Fortenberry (R-NE). Two days later, U.S. Secretary of State John Kerry clearly and unequivocally characterized the ongoing ISIL / Da’esh attacks and killings of the Christians, Yezidis, and Shiite Muslims in the Middle East as genocide, with specific mention of the destruction of Armenian churches as part of the cultural destruction of these historic communities. The Senate adopted a similar resolution (S.Res.340) on July 7th.

In Defense of Christians is a 501(c3) U.S. non-profit organization whose mission is to ensure the protection and preservation of Christianity and Christian culture in the Middle East. They work to foster global awareness of the on-going plight of Middle Eastern Christians, encourage political advocacy in order to educate national and international policymakers so as to act toward this goal, and promote programs of humanitarian aid in solidarity with suffering Christian communities in the Middle East.