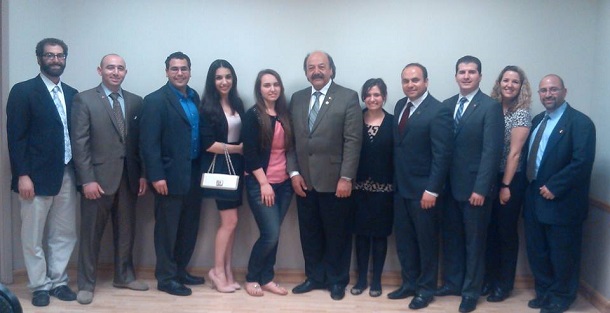 (March 4, 2014) SACRAMENTO—This week the Armenian National Committee of America — Sacramento held a kickoff event featuring California State Assembly Members Adrin Nazarian and Katcho Achadjian. The event, attended by a diverse crowd of all ages, covered issues of concern to the Armenian American community, and the political lay of the land for the Greater Sacramento area. Most importantly the event provided an in depth discussion as to what the community must do to build political capital as an Armenian American constituency in the region.

Special guests Nazarian and Achadjian each shared their personal stories of how they came to be state legislators – highlighting the importance of organizing and turning out voters. Both legislators made a $500 contribution to support the local efforts of the ANCA – Sacramento.

“Our goal here is to motivate and inspire everyone to further their activism in order to make sure our voices are heard by our elected representatives,” said Garo Manjikian, Chair of ANCA – Sacramento. “We look forward to educating our members of Congress on our priority issues this year.”

ANCA – Sacramento Board Members Lilit Movsisyan and Ted Tourian touched upon the major issues the ANCA has been pursuing at the national level. “This year’s Armenian Genocide Resolution, H.Res.227, goes a step beyond calling on the President to recognize the Armenian Genocide. It reaffirms past recognitions,” said Movsisyan. “It calls on President Obama to work toward durable Armenian-Turkish relations, based upon Turkey’s full acknowledgement of the facts and ongoing consequence of the Armenian Genocide.”
“The ANCA has worked tirelessly to secure foreign aid for Nagorno-Karabagh,” said Tourian. “This past year Nagorno-Karabakh was the only former Soviet country to receive foreign aid from the United States.”

“We have big goals for 2014,” stated ANCA – Sacramento Board Member Hrag Kitsinian. “Besides educating our elected representatives and urging their support for our issues, we plan to be civically engaged – registering Armenian-American voters and turning them out come election time.”