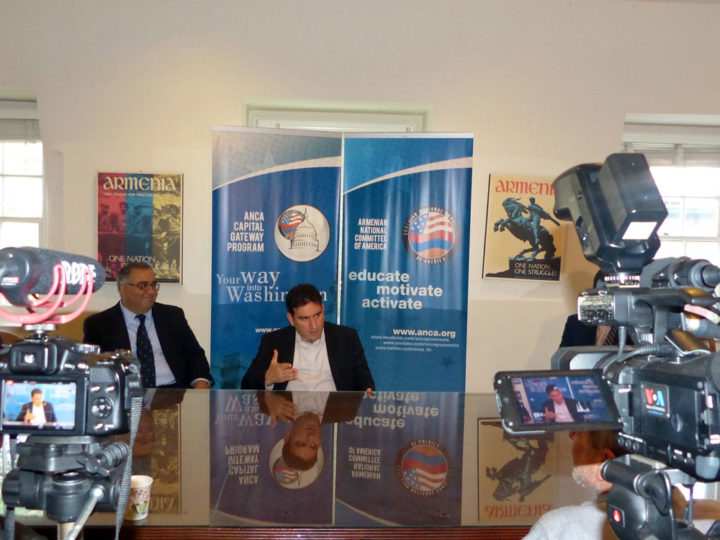 The two hour program was held in the ANCA’s Aramian Conference Room.

“We were pleased to provide this opportunity for Garen Mikirditsian to share his compelling vision for Armenia’s economic growth, to openly address concerns raised by friends of Armenia, and to cooperatively explore ways that Armenian stakeholders in Washington, DC’s international affairs community can continue to contribute to the growth of the U.S. – Armenia bilateral economic relationship,” said ANCA Executive Director Aram Hamparian, who moderated the talk.

Mikirditsian outlined the short term and long term goals of the Development Foundation of Armenia, which promotes the economic growth and global competitiveness of Armenia based businesses by attracting and encouraging investments and expanding export markets, as well as promoting Armenia internationally as an attractive tourism destination. The DFA was established by the Government of Armenia in 2015 with a Board of Directors chaired by the Prime Minister and includes representation both from the private sector and the ministries of Economy, Finance and Agriculture. Mikirditsian was appointed acting chief executive officer in April, 2016.

Roundtable participants asked detailed questions about a broad range of topics, including efforts to expand Armenia’s burgeoning IT sector, new tourism sector opportunities, the growing wine industry in Armenia, and the need to overcome longstanding obstacles to investment. Mikirditsian highlighted ongoing cooperation with the World Bank and a close working relationship with the U.S. Embassy and USAID, particularly in the joint effort with the Smithsonian Institute to develop Armenia’s tourism strategy and targeted capacity building initiatives. Upcoming 2016 efforts to spotlight Armenia’s textile and light manufacturing sectors during a trade exposition in Yerevan, Armenia and a planned investors’ forum in the U.S. were also discussed.

The focus on U.S. – Armenia trade relations increased significantly last year with the signing of a Trade and Investment Framework Agreement (TIFA), a bilateral accord advocated by the ANCA for over a decade as part of a broader campaign to strengthen bilateral economic cooperation. To build on that understanding, the ANCA is working to secure a double tax treaty in order to establish a clear legal framework for investors and individuals that have business activities in both jurisdictions, preventing double taxation and facilitating the expansion of economic relations. For additional information and to call on U.S. legislators to implement a U.S.-Armenia double tax treaty, visit http://anca.org/trade.