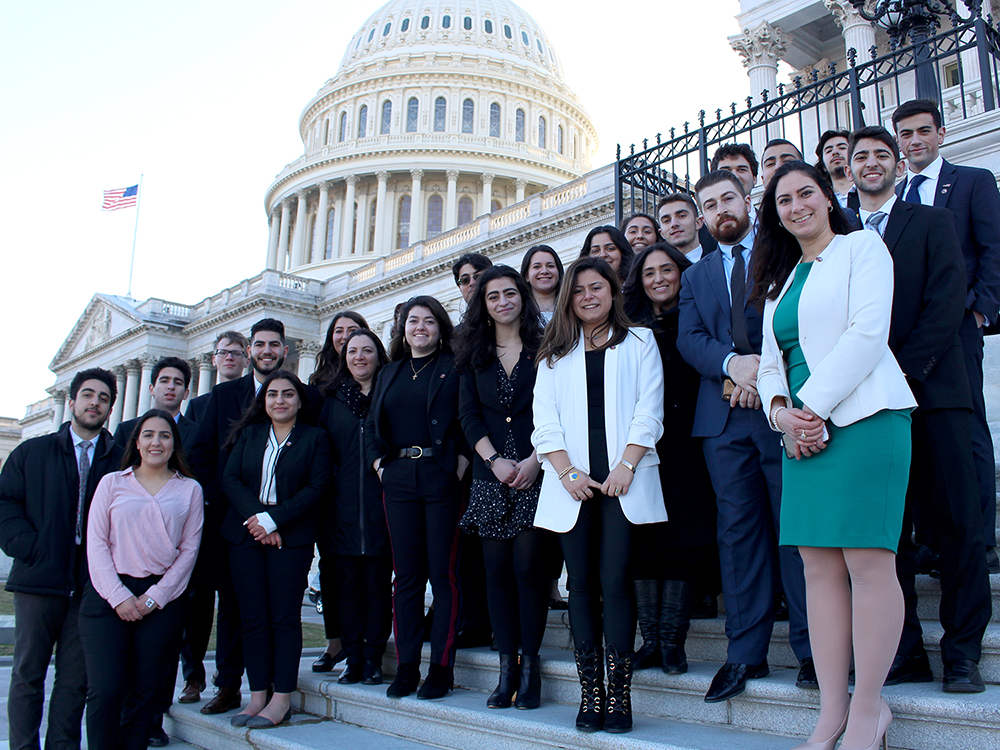 — ANCA, AYF and Georgetown ASA Already Gearing Up for 2020 Program

WASHINGTON, DC – Over 30 students from top universities and high schools across the U.S. traveled to the nation’s capital to take part in the Armenian National Committee of America’s (ANCA) inaugural Rising Leaders Program – three days of career development and civic engagement designed to inspire public service and community engagement.

The ANCA’s Tereza Yerimyan led the March 10th to 12th initiative, organized in conjunction with the Armenian Youth Federation (AYF) Eastern and Western Regions and the Georgetown University Armenian Students Association (Georgetown ASA), and made possible in large part through a generous contribution by the Ararat Foundation Shahinian Educational Fund.

“Our ANCA Rising Leaders inaugural seminar was a great way for Armenian American youth to explore their own professional career opportunities in Washington while also engaging with civic leaders on the issues we care about collectively as a community,” said ANCA Programs Director Tereza Yerimyan. “We’re thrilled to have hosted this inaugural program and can’t thank the AYF Eastern and Western U.S. and the Georgetown ASA enough for their help in getting this program off the ground.”

“The AYF Western U.S. was proud to team up with the ANCA to organize this one-of-a-kind leadership seminar in the nation’s Capitol,” said AYF Western U.S. Central Executive Chairman Dickran Khodanian, who also serves as ANCA Western Region Communications Coordinator. “This most recent investment in our community’s youth helps young Armenians realize their full career potential by exploring opportunities in Washington, D.C. We look forward to working together to expand the program, broaden the horizons of our youth, and advance our common cause.”

The program kicked off on Sunday afternoon, with career development workshops focusing on resume preparation, networking, and effective ways to use LinkedIn, led by ANCA Hovig Apo Saghdejian Capital Gateway Program (ANCA CGP) alumni Avak Kahramanian and Tadeh Isskhanian and Program Director Yerimyan. USC Price School of Public Policy Professor Frank Zerunyan rallied the Rising Leaders about the importance of expanded civic engagement both to advance community priorities and for career advancement. At the end of the day, participants sat down with ANCA CGP alumni for one-on-one resume review sessions.

On day two of the program, Rising Leaders met on Georgetown’s campus for panel presentations providing an insider’s view on careers in the U.S. foreign service, international development, and the 2020 Presidential and Congressional campaign trails from former U.S. Ambassador to Armenia John Marshall Evans, American University and Boston University Professor Greg Aftandilian, The HALO Trust’s Amasia Zargarian, and A Demand for Action’s Steve Oshana, with the moderation of ANCA Government Affairs Director Raffi Karakashian. In the afternoon, ANCA National Board Chairman Raffi Hamparian was joined by the ANCA Western Region’s Zanku Armenian and Eastern Region’s Ani Tchaghlasian in offering a 360 degree perspective of the work of the ANCA and its efforts to advance community priorities on the federal, state and local level.

The day concluded with a “khorovadz/kebab” dinner at the ANCA Aramian House where students chatted with ANCA CGP alumni, board members, and local professionals who shared their experiences in starting their careers in Washington, DC.

Nareg Kuyumjian, Georgetown University Armenian Student Association President said, “We were thoroughly inspired by the way the Armenian youth came and worked together over the course of the three days to educate themselves and connect with one another. There are so many opportunities for us in the nation’s capital and we saw that first hand. We’d like to thank the ANCA and the AYF for all the work they did to help make this event possible and we look forward to making Georgetown University the home of ANCA Rising Leaders for years to come.”

“The ANCA’s investment in preparing the next generation of leaders has become a vital step in the work of Hai Tahd,” said AYF Eastern U.S. Central Executive Member Meghri Dervartanian, who also participated in the program. “The AYF Eastern Region was happy to join the ANCA in co-hosting this inspiring and resourceful leadership seminar. Through these types of collaborations and programs, the torch is now being passed on to the next generation. The AYF Eastern Region promises to embody that collective spirit of survival and revolution and remain steadfast in our commitment to the Armenian Cause.”

On the final day of the program, the ANCA Rising Leaders headed to Capitol Hill where they were greeted by the Congressional Armenian Staffers Association (CASA), who generously co-hosted a luncheon for the group. CASA leaders Maria Martirosyan, Arlet Abrahamian, Casey Davison, and Paul Iskajyan were joined by Sam Tatevosyan, Government Affairs Director of the McDonalds Corporation, and Charles Yessaian, Chief Operating Officer of the JMH Group, in sharing insights about how they started their careers in Washington, DC.

Participants capped off the program with a reception at the Embassy of the Republic of Armenia where His Excellency Ambassador Varuzhan Nersesyan offered words of wisdom, encouragement, and solidarity.

Inspiring remarks were also shared by Berdj Karapetian, the Executive Chairman of the Armenian Museum of America and ANCA Western Region Board member, Irma N. Kassabian, the Chairwoman of the Armenian Relief Society Washington Satenig Chapter (which provided wonderful food and desserts for the evening), and also Dean Shahinian, on behalf of the Ararat Foundation’s Shahinian Educational Fund, which helped make the entire Rising Leaders program possible. Keynote remarks were offered by Charlie Mahtesian, the Senior Politics Editor of POLITICO, who shared his own experiences and encouraged the assembled young participants to explore rewarding careers in journalism.

Voice of America Armenian Division covered the ANCA Rising Leaders event at the Armenian Embassy, video of which is available here: