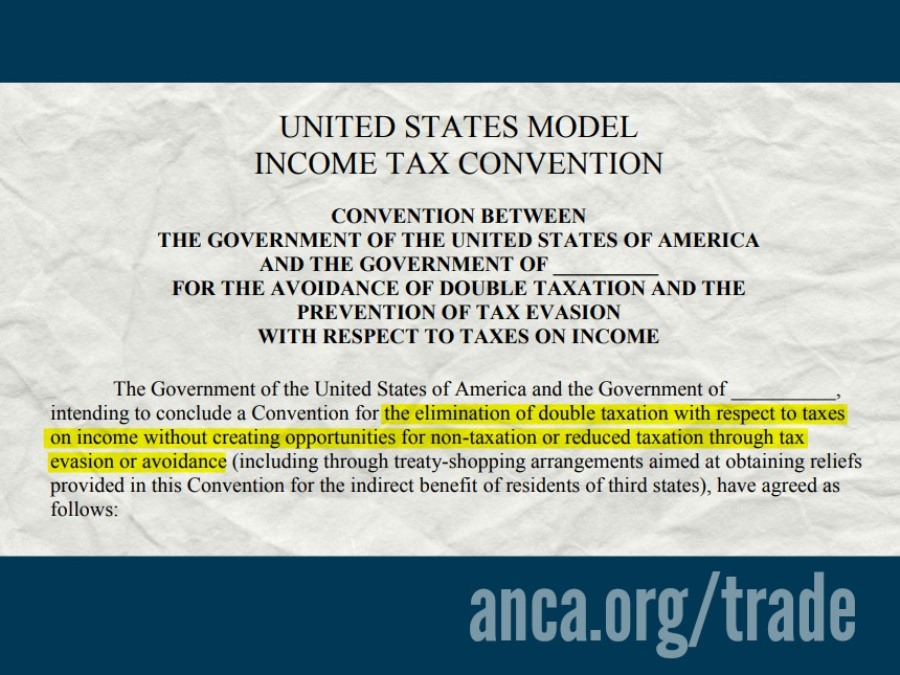 WASHINGTON, DC – In the wake of Armenia’s peaceful, constitutional political transition – a move broadly welcomed among Washington, DC policymakers as marking a new chapter in U.S.-Armenia relations – the Armenian National Committee of America (ANCA) has renewed its longstanding drive for a U.S.-Armenia Double Tax Treaty, a good-governance accord needed to break down artificial barriers to the growth of bilateral trade and investment.

The Republic of Armenia has expressed its willingness to start treaty talks on the basis of the 2016 “U.S. Model Income Tax Convention,” a standard template used by many nations in reaching agreements with the United States. This model treaty prioritizes the transparent exchange of information, a hallmark of good governance and a statutory check, enforced by both parties, against attempted “non-taxation or reduced taxation through tax evasion or avoidance.”

“We are encouraged by the result of our recent meetings with Administration officials and Congressional leaders, during which we stressed our strategic priority of strengthening U.S.-Armenia ties, with a strong focus on broad-based, sustainable economic cooperation,” said ANCA Chairman Raffi Hamparian. “We look forward to continuing our work with stakeholders in Washington, DC and Yerevan to put this accord in place and also advance a broad array of other initiatives – in the economic, political and military arenas – aimed at broadening and deepening the longstanding friendship of the American and Armenian peoples.”

In February of this year – in response to a Congressional letter spearheaded by Armenian Caucus Co-Chair David Valadao (R-CA) and senior Foreign Affairs Committee member Brad Sherman (D-CA), and signed by 31 U.S. Representatives – U.S. Secretary of Treasury Stephen Mnuchin pledged to devote Treasury Department staff resources to exploring a Double Tax Treaty with Armenia. These legislators stressed the urgency of renegotiating the existing, outdated Double Tax Treaty with Armenia, an obsolete Cold War-era accord – recognized today by the U.S. but not Armenia – that was negotiated with the now defunct U.S.S.R. more than four decades ago.

“American and Armenian businesses have close ties and it’s time to end the double taxation currently imposed on businesses in both nations,” explained Rep. Valadao. “By renegotiating our tax treaty with Armenia, we can continue to strengthen our relationship with a close ally while encouraging trade and investment in our great nations,” he continued. “Modernizing our double tax treaty with Armenia is long overdue,” explained Rep. Brad Sherman (D-CA), who pressed Secretary Mnuchin on the issue during a House Financial Services Committee hearing in February. “This is not only an opportunity to reaffirm our friendship with Armenia, but to also create new opportunities for investment and growth.”

Following the signing of the U.S.-Armenia Trade and Investment Framework Agreement (TIFA) in 2015, the ANCA has been working closely with a broad range of legislators to encourage the Department of Treasury to negotiate a new U.S.-Armenia Double Tax Treaty. In September 2017, the ANCA joined with Paul Korian and Peklar Pilavjian, leading U.S. investors in Yerevan’s landmark Marriott hotel, for a series of Capitol Hill and State Department meetings making the case for an updated compact. Internationally renowned Tufenkian Artisan Carpets; Triada Studio, the Armenia-based creator of the Apple Design Award-winning Shadowmatic Game; and PicsArt, the Yerevan and San Francisco based makers of one of the most popular photo-editing, collage and drawing apps, are among the many firms urging the lifting of barriers to U.S.-Armenia trade through the implementation of a new double-tax treaty.

The full text of the Valadao-Sherman letter is online here.

The full text of the 2016 U.S. Model Tax Treaty is available here.

Provided below is Article 26 of the 2016 U.S. Model Tax Treaty, which addresses the open exchange of information.

EXCHANGE OF INFORMATION AND ADMINISTRATIVE ASSISTANCE

1. The competent authorities of the Contracting States shall exchange such information as is foreseeably relevant for carrying out the provisions of this Convention or the domestic laws of the Contracting States concerning taxes of every kind imposed by a Contracting State to the extent that the taxation thereunder is not contrary to the Convention, including information relating to the assessment or collection, or administration of, the enforcement or prosecution in respect of, or the determination of appeals in relation to, such taxes. The exchange of information is not restricted by paragraph 1 of Article 1 (General Scope) or Article 2 (Taxes Covered).

3. In no case shall the provisions of paragraphs 1 and 2 of this Article be construed so as to impose on a Contracting State the obligation:

b) to supply information that is not obtainable under the laws or in the normal course of the administration of that or of the other Contracting State; or

c) to supply information that would disclose any trade, business, industrial, commercial, or professional secret or trade process, or information the disclosure of which would be contrary to public policy.

5. In no case shall the provisions of paragraph 3 of this Article be construed to permit a Contracting State to decline to supply information solely because the information is held by a bank, other financial institution, nominee or person acting in an agency or a fiduciary capacity or because it relates to ownership interests in a person.