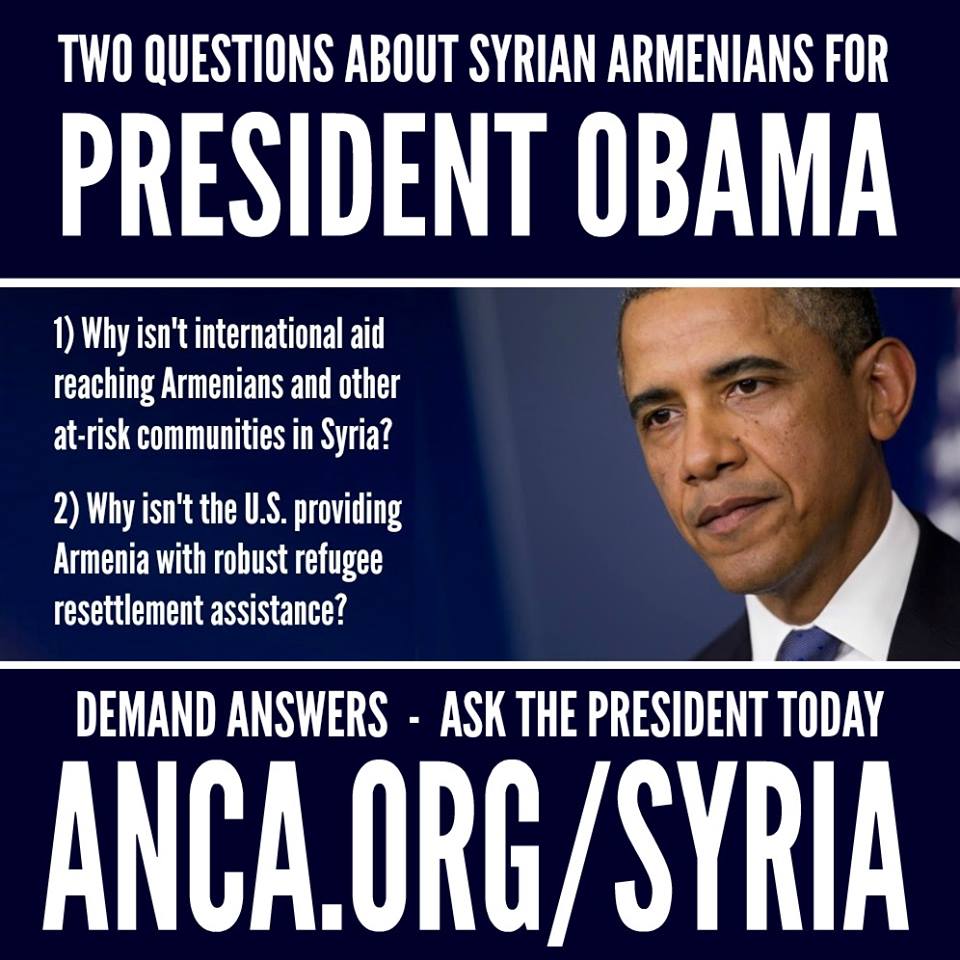 — Calls for Relief Aid in Syria; Resettlement Assistance in Armenia

Taking action via the ANCA’s website, local advocates are encouraging their elected officials to respond to two sets of priorities. The first, in Syria, is for the U.S. government to ensure that international aid actually reaches Armenians and other at-risk populations. Gaps in the delivery of assistance have left many communities – particularly minority populations – outside the stream of international relief supplies and support. The second, in Armenia, is for the Administration to provide direct U.S. support and facilitate increased international aid for Armenia’s refugee and resettlement programs. Armenia has, to date, received only very limited international aid for rental subsidies, social services, work-training, health care, and other basic needs.

The ANCA action alert can be found at: www.anca.org/syria

The text of the ANCA’s sample letter to President Obama is provided below.

U.S. assistance to Syrian Armenians has consistently been part of the ANCA’s ongoing dialogue with the Obama Administration on a broad range of Armenian American priorities. In Congress, the ANCA continues to raise the issue in the run-up to Senate and House passage of the Fiscal Year (FY) 2016 foreign aid bill. ANCA Government Affairs Director Kate Nahapetian testified before the House Appropriations Subcommittee on Foreign Operations earlier this year detailing Armenian American concerns. The House version of the measure, adopted by the Appropriations Committee earlier this month, spotlights the broader need to provide humanitarian assistance for Syrian refugees. The ANCA is currently working with Senate Appropriations Committee members to address the Syrian crisis as well as expand assistance to Nagorno Karabakh and Armenia. Committee consideration of the measure is expected in July. Armenian Americans can take action by sending an ANCA webmail to legislators by visiting http://www.anca.org/aid.

Sample letter to President Obama regarding US assistance to Syrian Armenians.

I am writing to ask for your active leadership in alleviating the desperate situation facing Armenians and other at-risk communities as a result of the war in Syria.

First and foremost, I urge you to close gaps in the delivery of need-based humanitarian aid within Syria that have left Armenians and other at-risk communities largely outside the stream of international assistance. Current aid-delivery models, while meeting many humanitarian needs across Syria, do not, as a practical matter, reach many of the country’s most vulnerable populations. As a result, over the course of the past several years, and despite our government’s allocation of several billions dollars of assistance, Armenians – an innocent civilian population caught in the crossfire of enemy combatants – have largely been forced to fend for themselves, with the humanitarian help of Armenians from the United States and around the world.

We also call upon you to substantially increase the level of U.S. aid to resettlement efforts in Armenia. This increase should include both: 1) added funding for U.S. and international assistance available directly (via UNHCR and other means) to vulnerable families fleeing Syria, and also 2) added direct aid to the Republic of Armenia to help it absorb and support those from Syria who are seeking refuge in Armenia.

Despite its very difficult economic circumstances, Armenia – a blockaded and landlocked nation – has accepted over 17,000 individuals seeking refuge from the Syria war, a considerably larger number, on a per-capita basis – than many larger and wealthier countries. The U.S. should lead the way toward markedly higher levels of assistance – both directly to families and through aid to the Armenian government – to provide rental subsidies, social services, work-training, health care, and meet other basic needs.

More broadly, on the foreign policy front, I call upon you to do all in your power to prevent attacks on Syria’s civilian populations, including those by extremist groups backed by Turkey. America must have “zero-tolerance” for the complicity of our NATO ally in any violence targeting civilians and minority communities. In this spirit, we call upon you to work with our partners in the international community to prevent attacks on civilians and to seek the restriction of military operations to non-residential areas.

As you know, the Armenian community of Syria, a population with ancient roots, is, today, comprised in large part of the descendants of survivors of the Armenian Genocide. Hundreds of thousands of Armenians and other Christians fleeing this crime – exiled from their homeland and abandoned by much of the Western world – found safe haven among the Syrian people. Their experience in Syria over the past century stood as a powerful example of tolerance, multicultural understanding, and cross-faith co-existence. With this current crisis, however, they are being victimized for a second time. The same international community that failed to justly resolve (or even in many cases to properly recognize) the Armenian Genocide – in a manner that would have allowed the Armenian survivors of this unpunished atrocity a rightful return to their homeland – now bears a solemn obligation to provide their at-risk grandchildren in Syria with the option of a secure future within the Republic of Armenia.

I thank you for your attention to my concerns, and for your service to our nation. As an American, I look to you to provide renewed leadership in meeting this challenge, fully expect that my government will act in an urgent and decisive manner to deliver concrete results in aiding at-risk populations, and look forward to hearing from you about the specific steps that your Administration is taking in this regard.