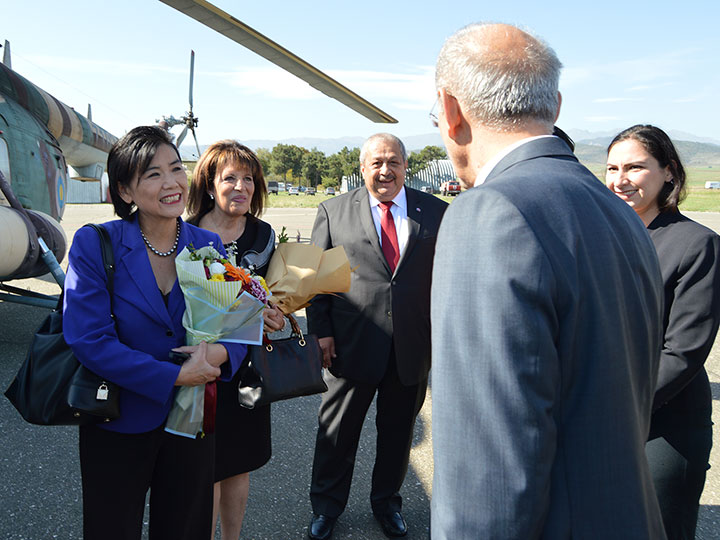 WASHINGTON, DC – Congresswoman Judy Chu (D-CA) and Congressional Armenian Caucus Co-Chair Jackie Kanchelian Speier (D-CA) arrived in Stepanakert for their first visit to the Republic of Artsakh (Nagorno Karabakh), sending a powerful message to Azerbaijan’s Aliyev regime that threats to “blacklist” U.S. legislators will not deter them from traveling to Artsakh and engaging in democratic dialogue with its citizens, elected officials, and civic leaders, reported the Armenian National Committee of America.

Representatives Speier and Chu are in Artsakh for a series of high-level meetings with Artsakh government officials and also to oversee U.S. humanitarian aid to the Republic, including de-mining efforts carried out by The HALO Trust. ANCA Western Region Board Member Raffi Sarkissian and ANCA Government Affairs Director Tereza Yerimyan joined an Artsakh Government delegation including National Assembly Vice-Chair Vahram Balayan and National Assembly member David Melkumyan in welcoming the legislators to Stepanakert.

Congresswoman Chu was at the forefront of defending Artsakh’s safety and security this summer, advancing the Chu Amendment to the Fiscal Year 2020 National Defense Authorization Bill, which advocates for the implementation of the cease-fire strengthening proposals originally put forward by House Foreign Affairs Chairman Eliot Engel and his predecessor, Ed Royce. The Royce-Engel proposals call for the placement of gunfire locators, an increase in OSCE observers, and a ban on snipers, heavy arms, and new weaponry along the borders between Azerbaijan and neighboring Armenia and Artsakh. “Adopting them is necessary for ensuring those who violate the peace are caught and stopped, and that is what my amendment encourages,” Rep. Chu told the ANCA following the passage of the measure in July, noting, “the campaign of terror against the people of Artsakh must end.”

“The ANCA welcomes Congresswoman Judy Chu’s visit to the Republic of Artsakh,” shared ANCA National Board member Levon Kirakosian. “We are proud of the grassroots work the ANCA of San Gabriel Valley has done with Congresswoman Chu over the last two decades to advance the Armenian Cause. We are also proud that the ANCA-Western Region will be honoring Congresswoman Chu at their sold-out banquet this year for her work advancing a free and independent Artsakh,” Kirakosian added.

Congressional Armenian Caucus Co-Chair Jackie Kanchelian Speier, who also co-Chairs the U.S. House Demining and Unexploded Ordnance Caucus, has been outspoken in her calls for continued U.S. de-mining assistance to Artsakh. During a May, 2019, Capitol Hill event marking the 25th anniversary of the Artsakh cease-fire, signed by Armenia, Artsakh, and Azerbaijan, Rep. Speier explained, “I am heartened by the US contributions to de-mining, surveys, and mine education to the [Artsakh] region, but we have a duty to do more to secure the peace and prosperity there.” Rep. Speier pledged to work to ensure U.S. de-mining assistance in the Fiscal Year 2020 foreign aid bill, noting that the exclusion of funds would be “simply unacceptable and totally inhumane.” In June, Rep. Speier was among key supporters of an amendment, spearheaded by Rep. TJ Cox, which called for continued U.S. de-mining assistance. In August, Rep. Speier and Rep. Chu were among over 80 U.S. House members who called on the US Agency for International Development to honor their commitment for continued Artsakh de-mining assistance.

“We are so proud of Congresswoman Jackie Speier – a cherished member of our local community here in the Bay Area and a respected national leader in Washington, DC,” said ANCA San Francisco-Bay Area longtime advocate Haig Baghdassarian. “We warmly welcome her arrival on the free soil of the Artsakh Republic, look forward to a rewarding and productive visit, and stand ready to work with her, upon her return, to strengthen Artsakh’s security, increase U.S. funding for Artsakh humanitarian programs, and forcefully challenge Azerbaijan’s aggression.”

Just days prior to their travel to Armenia, Rep. Speier joined Congressional Armenian Caucus Co-Chair Frank Pallone (D-NJ) and Vice-Chair Adam Schiff (D-CA) in calling for zeroing out U.S. military assistance to Azerbaijan, given the Aliyev regime’s ongoing attacks against Artsakh and Armenia. Over the past week, an Armenian soldier was killed and two more injured as a result of Azerbaijani cross border attacks.