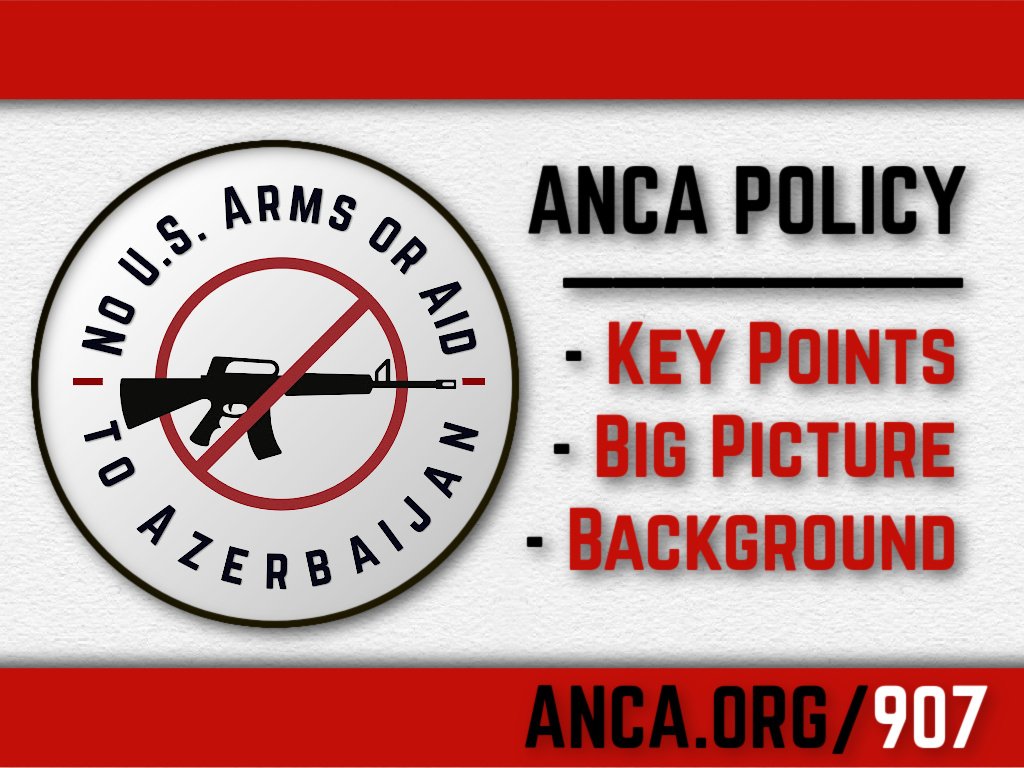 1) Language in the FY23 State-Foreign Operations bill requiring that: “No funds appropriated or otherwise made available under this Act may be provided to the Government of Azerbaijan for U.S. military or security programs.

2) Language in the FY23 National Defense Authorization Act repealing the President’s authority to waive Section 907 of the FREEDOM Support Act restrictions on U.S. aid to Azerbaijan.

American credibility. Tens of millions of U.S. tax dollars. The survival of an ancient Christian nation on its indigenous homeland.

U.S. taxpayers should not have to subsidize the army of an oil-rich dictator ethnically cleansing indigenous Christians from their ancient homeland.

— The $164,000,000 in U.S. military aid already sent to Azerbaijan (as documented by the General Accountability Office) materially strengthened and morally emboldened its leaders to ethnically-cleanse Artsakh.

— In the wake of Azerbaijan’s 2020 ethnic cleansing of 100,000+ indigenous Armenians from Artsakh (Nagorno Karabakh) –amid Azerbaijan’s ongoing invasion and occupation of Armenian territory – not a single U.S. tax dollar should be sent to Aliyev’s armed forces.

— Now, more than ever, Congress must maintain the spirit and letter of Section 907 of the Freedom Support Act, a longstanding provision of law aimed at holding Azerbaijan accountable for its aggression against Armenians.

— The danger of green-lighting military aid to Azerbaijan extends beyond the South Caucasus. Abetting one of the world’s most authoritarian regimes weakens America’s standing as a beacon of human rights.

— U.S. recognition of the Armenian Genocide comes with the responsibilities, among them not sending arms or aid to states – like Azerbaijan that are hell-bent on completing this crime.

— Amid pressing needs at home and abroad, Congress should not be sending U.S. tax dollars to subsidize the oil-rich regime of corrupt Azerbaijani dictator Ilham Aliyev.

Section 907, as originally enacted in 1992 with strong bipartisan support, restricts U.S. assistance to the Government of Azerbaijan until the President determines, and so reports to the Congress, that the Government of Azerbaijan is taking demonstrable steps to cease all blockades and other offensive uses of force against Armenia and Nagorno-Karabakh. It has been waived – under expanded authority granted by Congress in 2001 – during the Bush, Obama, Trump, and Biden Administrations.

The General Accountability Office – which has documented that a total of $164,000,000 has been provided under Section 907 waiver authority – concluded that the Executive Branch has violated Section 907 by failing to meet its statutory obligation to address all elements of its reporting requirements to Congress – including the prohibition on any U.S. assistance being used by Azerbaijan for offensive purposes against Armenia.