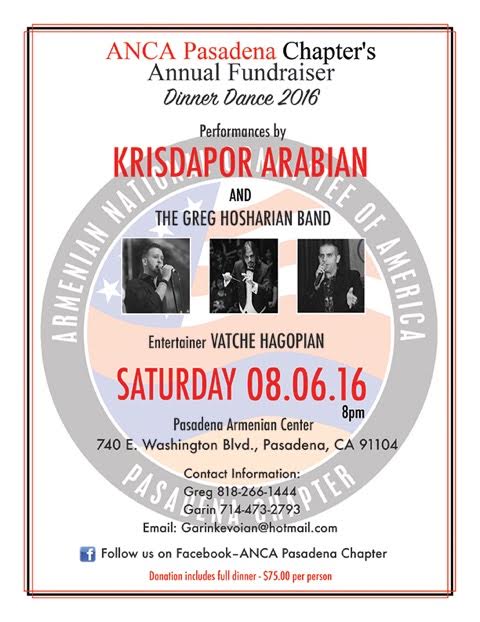 ANCA-Pasadena to Host its Annual Banquet

PASADENA—The Board of Directors of the Armenian National Committee of America – Pasadena Chapter is pleased to announce and cordially invites the community to its Annual Banquet which will be held on Saturday Evening, August 6th, 2016 at 8pm at the Pasadena Armenian Center – Washington located at 740 E. Washington Blvd, Pasadena, CA 91104.

The ANCA-Pasadena Annual Banquet is the largest and most prestigious gathering of the Armenian-American community of its kind within the City of Pasadena. This year, as in previous years, we expect our banquet to be attended by well over 500 elected and appointed public officials, Armenian-American business owners, local and regional friends, supporters, members and activists of the ANCA-Pasadena and representatives from several Armenian-American charitable, cultural, political, social, educational, legal, athletic, human rights, and student organizations operating throughout the City.

This year’s banquet will feature dinner, speakers, multimedia presentations and entertainment from several world renowned performers and has already received great interest from elected officials, prominent members of government and the overall community.

The Armenian National Committee of America – Pasadena Chapter is the oldest, largest and most influential Armenian-American grassroots organization of its kind within the City of Pasadena. Founded in 1982, the ANCA-Pasadena advocates for the social, economic, cultural, and political rights of the city’s thriving Armenian-American community and promotes increased civic service and participation at the grassroots and public policy levels.

The community is openly invited to attend this banquet, and join us as we recognize and celebrate the achievements of our venerated organization. Questions or further inquiries can be directed to Greg Abajian at (818) 266-1444

Who: The Board of Directors of the Armenian National Committee of America – Pasadena Chapter

What: The 2016 Annual Banquet of the ANCA – Pasadena Chapter