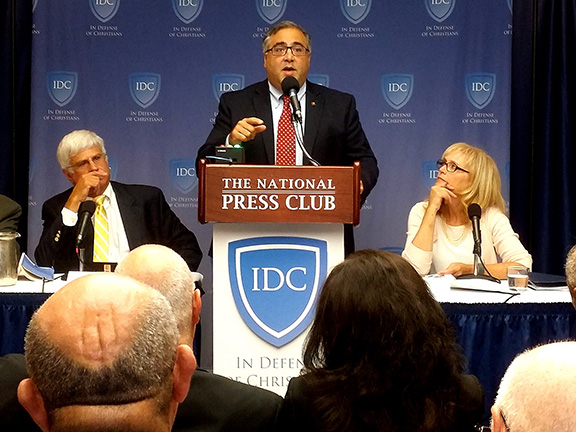 WASHINGTON, DC – Calls for concrete U.S. leadership to protect Middle East Christians from extremist violence took center stage on Capitol Hill last week as advocates from across America and around the world gathered for the In Defense of Christians (IDC) convention.

From the opening September 9th press conference held at the National Press Club, the three day event featured commentary by Members of Congress and powerful calls by constituent advocates for global condemnation of ongoing anti-Christian attacks in the Middle East as genocide, and equally forceful demands for U.S. leadership in securing the safety and meeting the humanitarian needs of at-risk indigenous Christian, Yezidi, and other minority communities.

Hamparian: We Must Elevate U.S. Response to Genocide from a Political Choice to a Moral Imperative

During the opening press conference for the IDC convention, titled “ISIS, Genocide, and an International Response,” ANCA Executive Director Aram Hamparian stressed the need for the U.S. and international communities to shift their response to genocide from politics to morality. “If we can elevate our nation’s response [to genocide] from a political choice to a moral imperative, then all of the pieces will fall into place.” explained Hamparian, as part of a broader review of the requirements of U.S. anti-genocide policy.

Referencing the Armenian Genocide, Hamparian outlined the dangers of not properly characterizing and punishing ongoing acts of genocide. “Right now, the perpetrators of genocide know that if they perpetrate these crimes, and they have sufficient political will and sufficient political power, they can get the world to back off – to not intervene and ultimately to buy into their lies, because I guarantee you that the crimes that are being committed today, will be denied tomorrow.”

Wolf: “We failed the Armenians in the Armenian Genocide… Will we fail in the Middle East?”

Panelists were unified in their call for the classification of ISIS and other extremist attacks against Middle Eastern Christian and minority communities as genocide. Wolf offered his recommendation in no uncertain terms. “What we now see in Iraq and Syria is genocide. It meets the official Rafael Lemkin definition, it is genocide. It is genocide of Christians, of the Yezidis and probably the Turkomen and a few other religious minorities.”

Congressman Wolf was adamant in urging a concrete U.S. response, sharing a letter sent by the 21st Century Wilberforce Initiative, where he calls on Attorney General Loretta Lynch to “initiate a thorough investigation into individuals who may be criminally liable under U.S. law for genocide and other serious human rights abuses such as slavery.”

Congressman Wolf, who served as Co-Chair of the Congressional Human Rights Caucus, and had been a vocal advocate of U.S. reaffirmation of the Armenian Genocide during his 34 years in office, explained: “The President stood in front of the Holocaust Memorial in 2012 and declared ‘Never Again’ five times. We failed the Armenians in the Armenian Genocide – we failed them. To have called that genocide would have only honored those who were killed – nothing more was to gain – but we failed them. We failed in Srebernica. You remember General Dallaire in Rwanda that said genocide is coming and we failed them. Will we fail in the Middle East?”

Dr. Stanton shared an appeal signed by over 40 prominent International Association of Genocide Scholars (IAGS) experts calling on Congress to declare the crimes committed by ISIS ‘genocide’ and went on to urge the UN Security Council to refer ISIS crimes to the International Criminal Court for investigation and prosecution. Dr. Stanton explained the imperative of properly characterizing the Middle East events, citing empirical studies by Genocide Watch that there is “four times more of a chance of forceful action to stop it if you call it genocide. Genocide is a powerful word – and we should be using it.”

IDC Executive Director Kirsten Evans outlined the importance of unity in sharing Christian and minority concerns with US leaders and the international community. “We need to continue to organize a unified, strong, and a solid voice of ecumenical concern and political advocacy on this issue. And that voice needs to come from a tapestry of different communities and a lot of different corners of the world, but the voice itself needs to be orchestrated so that it is sound, and vibrant and solid and it is heard,” explained Evans.

In outlining IDC’s requests from Congress and the Administration, Evans outlined options for a military response to the crisis, and went on to ask international governments to: prioritize assistance for refugees and displaced persons; expedite the refugee classification process for those in danger of religious or ethnic persecution; expand coordinated humanitarian aid with guarantees for delivery to displaced communities; to work with international organizations and churches to preserve Christian culture in the region; guarantee the return of property to the rightful owners of communities when the conflict is resolved; and, explore ways to invest in education on an international level in order to fight radicalization and promote religious tolerance. “In short,” said Davis, “we as members of the American community need to be asking our policy makers to elevate religious freedom and freedom of conscience in U.S. international policy making.”

At the conclusion of the September 9th press conference, Congressman Jeff Fortenberry (R-NE) announced the introduction of bipartisan legislation declaring ISIS attacks against Christians and other minorities ‘genocide’ and calling on the United Nations and member countries to pursue the punishment of these crimes. H.Con.Res. 75, spearheaded in cooperation with Rep. Anna Eshoo (D-CA) and with the support of Representatives Trent Franks (R-AZ), Dan Lipinski (D-IL), Jeff Denham (R-CA), and Juan Vargas (D-CA) has over 35 cosponsors.

“Beginning with a resolution that calls this for what it is – a genocide – a wholesale slaughter of people, a grave injustice, we’ll hopefully elevate the conscience of the entire world as to what’s happening and attack the scandal of indifference – the scandal of silence that Pope Francis has stated,” explained Rep. Fortenberry at a meeting with IDC advocates the following morning. “It also has implications for those in a position to migrate, but it does not give up on the idea that Christianity as well as other faith traditions have every right to stay in their ancient homeland as anyone else.”

Congresswoman Eshoo concurred, describing Congressional efforts to stop the genocide against Christians and minorities in the Middle East a “calling.” She explained, “I am a first generation American – my mother, Armenian; my father, Assyrian. […] The stories of my family, and why they fled, and what they endured is repeating itself – is repeating itself all over again in the Middle East. And so, the work that we have devoted ourselves to – we are called to do.”

Representative Brad Sherman (D-CA) told IDC supporters that he is working with Rep. David Trott (R-MI) on legislation, to be introduced soon, focusing “on the Assyrian, Chaldean, Yazidi, Syriac Christian, and Armenian communities and the need not only to provide assistance to refugees but to provide security assistance to those who are trying to stay in their homeland.”

Congressman Sherman explained, “Christianity began in the Middle East – it thrived in the Middle East, and it is not up to ISIS to determine where Christians are allowed to live.” He also called for President Obama to appoint a Special Envoy to promote religious freedom in the Middle East – a position that was created last year by Congressional mandate, but that has yet to be filled.

Rep. Trott concurred and went further. “We need to call the President and Congress to devote more resources to the problems – where Christians are victims around the world. We need to call attention to our allies and adversaries who are killing Christians around the world to call them out on it, to withhold our aid, and threaten them with the full force of the superpower that the US is,” stated Rep. Trott, who is currently working with House Foreign Affairs Committee leaders to schedule a field hearing in Michigan to hear from individuals affected by ISIS and other extremist group attacks in the Middle East.

“Back in April, I was proud to go to Armenia as part of the 100-year commemoration of the Armenian Genocide,” continued Rep. Trott. “The President, the United States still won’t call it a genocide and that’s the kind of proactive leadership that this country needs to be known for and needs to fill on the world stage.”

The Armenian Genocide and the consequences of inaction were woven in remarks by many Members of Congress at the September 10th advocate briefing, including in a statement by Congressional Armenian Caucus Co-Chair Robert Dold (R-IL) and Pennsylvania Congressman Joe Pitts (R-PA). “We should remember that in 1939, Hitler reassured his comrades that they could get away with Genocide,” stated Rep. Pitts. “He [Hitler] asked, ‘Who, after all, speaks of the annihilation of the Armenians?’ Tyrants and evil men count on the indifference of the world and the fact that you are here shows that you are not indifferent – so thank you for standing against religious persecution.”

The ANCA joined His Eminence Archbishop Oshagan Choloyan, Prelate of the Eastern Prelacy of the Armenian Apostolic Church, and over 500 community and religious leaders concerned with the plight of the Christian and minority communities in the Middle East for this second IDC convention, titled “Mobilizing America for Christians in the Middle East.” Archbishop Choloyan, who is also President of Christian and Arab Middle Eastern Churches Together (CAMECT), attended the September 9th press conference and explained the importance of Armenian participation in events like the IDC convention. “Several years ago, those churches who have their mother churches in the Middle East, came together to raise awareness among Americans. Unfortunately, a very fanatic approach of interpreting religion has emerged in the region, and because of that, all the minorities in the Middle East are suffering, and among them, the Christians. We, as Armenians, are part of that region. We came to that region with a memory of Genocide and now we understand very clearly the feelings of these communities.” Archbishop Choloyan was among top clergy celebrating an ecumenical mass at St. Joseph Catholic Church on Capitol Hill later that evening.

Later that day, Hamparian was interviewed on the Nightly News Report on EWTN – the Global Catholic Network – and offered the ANCA’s insights on the IDC conference, the plight of Christian communities in the Middle East, and the importance of bringing together and collaborating with Christian and minority communities across the U.S. to raise broader awareness and secure concrete U.S. action regarding the crisis.

In Defense of Christians (IDC) is a nonprofit, nonpartisan organization committed to the preservation and protection of Christians in the Middle East. His Holiness Aram I, Catholicos of the Great House of Cilicia, joined with Christian leaders from throughout the Middle East at the inaugural IDC conference in 2014, offering a powerful call for unity in the face of the existential threat against historic Middle Eastern Christian communities.

Photo: ANCA Executive Director Aram Hamparian stressed the need for the U.S. and international communities to shift their response to genocide from politics to morality during the opening press conference for the IDC convention.