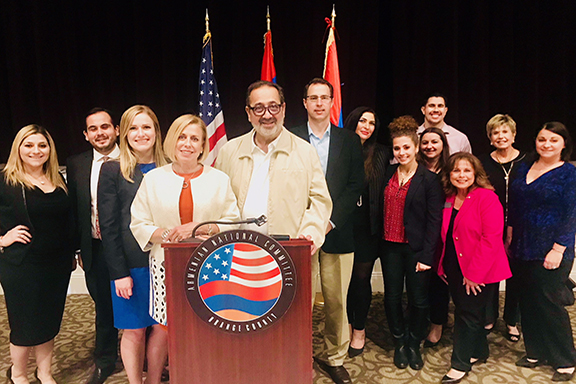 ANCA OC Screening of Women of 1915 a Huge Success

ANCA OC Board Member and mistress of ceremonies, Tatev Oganyan welcomed the community, supporters and elected representatives. She thanked the ARS Sevan chapter for preparing the appetizers and the ARF Armen Karo Gomideh for providing the wine and beverages for the evening. In her opening remarks Oganyan stated, “It was an honor for ANCA OC to host Bared Maronian’s Women of 1915, a documentary that connects viewers with so many powerful and untold stories of Armenian and non-Armenian heroes of the Armenian Genocide.”

Bainka Asik, ANCA OC Board Member and Communications and Media Representative for Assmeblymember Steven Choi, presented certificates on behalf of the Assemblymember to Bared Maronian and to ANCA OC for their efforts regarding this film and their continued pursuit of justice and ensuring a historically accurate account of the Armenian Genocide.

Oganyan briefly introduced the film, which was then showed to the capacity crowd of Armenian and non-Armenian attendees. The hall was completely silent as those in attendance attentively watched moving documentary.

At the conclusion of the film Oganyan recognized Vahe and Armine Meghrouni for establishing the UCI Meghrouni Family Presidential Chair in Armenian Studies. They were greeted with a thundering applause by the crowd for their contribution and efforts. She then introduced Bared Maronian who answered the many questions presented by the audience regarding this film, the Armenian Genocide, and his future projects.

Following the frank and candid conversation with Maronian, ANCA OC Board member Alique Cherchian thanked those in attendance for continuously supporting the ANCA, the film, and closed with, “By continuing to work together we can move mountains.”

Elected officials and their representatives in attendance

ANCA OC is the Orange County chapter of the Armenian National Committee of America, Western Region, and part of the most influential Armenian American grassroots advocacy organization in the Western United States. Working in coordination with a network of activists and supporters, and activists throughout Orange County and affiliated organizations and institutions in the region, it advances the concerns of the Armenian American community on a broad range of local and national issues.