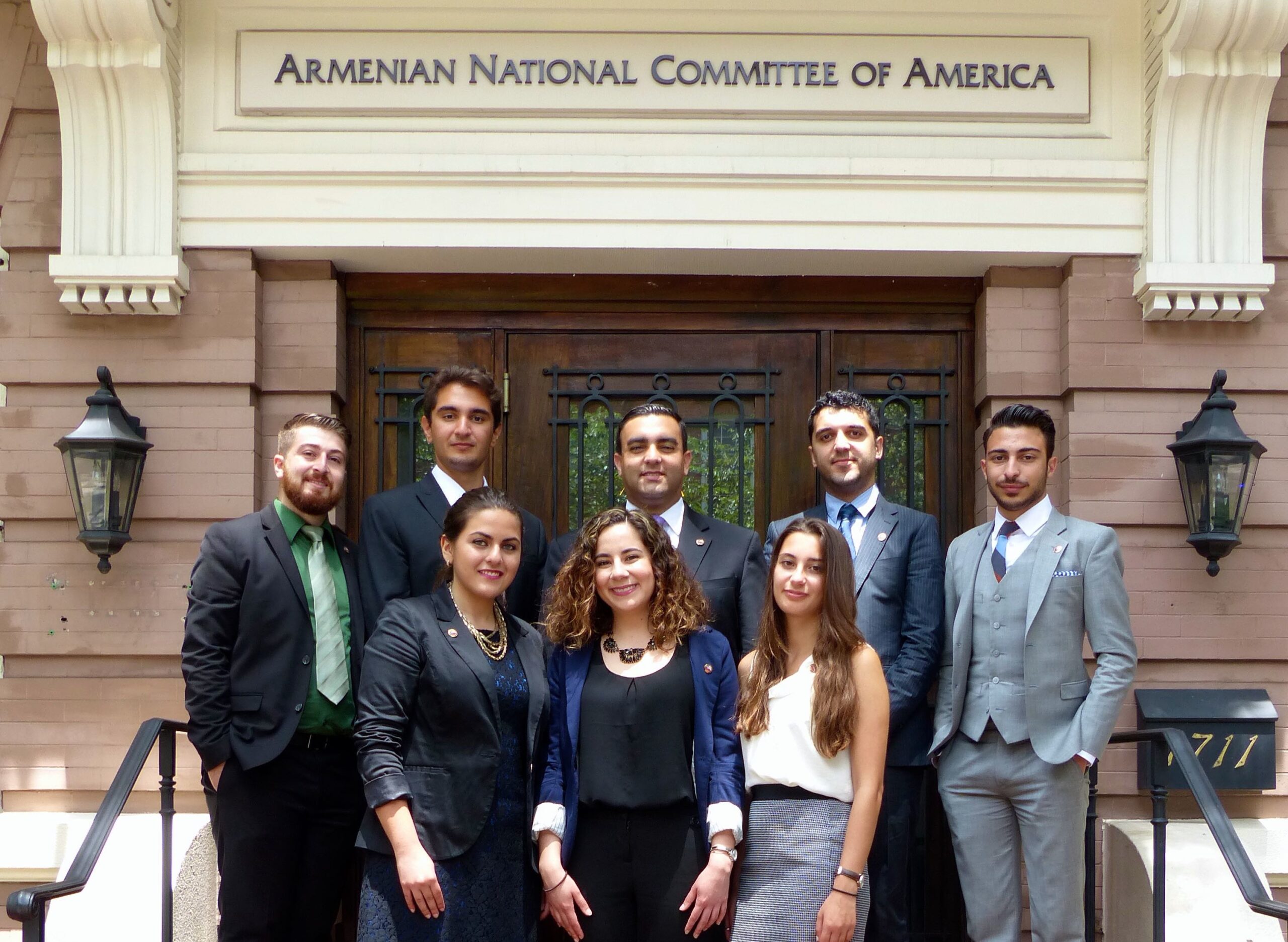 Advocate Training Program Empowers Future Leaders of the Armenian Cause

WASHINGTON, DC – Thirty years after its inception, the Armenian National Committee of America (ANCA) “Leo Sarkisian” Internship Program continues to expand Armenian American civic activism through the landmark summer initiative, training top university students from across the United States and Canada to become effective ambassadors of the Armenian Cause.

“The ANCA invests in youth,” said ANCA Legislative Affairs Director Raffi Karakashian. “It’s who we are. It’s part of our organizational DNA. We are blessed with a great class of interns this year, and look forward to working with them to address the challenges we face, inspiring them to serve our community as leaders, and, of course, empowering them to reinvent our cause for a new era.”

Each of this year’s seven interns, having been chosen through a competitive application process, are looking forward to a life changing experience, with the hope of making a difference on a nation-wide scale. The year’s intern class consists of university students and recent graduates, including: Arevig Afarian, Denise Altounian, Patrick Babajanian, Ripsime Biyazyan, Dickran Khodanian, Erik Khzmalyan and Shaunt Tchakmak.

Interns, who participate in a wide variety of projects based on their individual interests, are given the opportunity to gain hands-on experience within the American political system. They participate in a bi-weekly lecture series featuring guest lecturers, including public officials and Armenian American leaders.

Much of the first week was spent on Capitol Hill meeting with a series of leading advocates of Armenian American concerns, including Congressional Armenian Caucus Co-Chair Robert Dold (R-IL), House Intelligence Committee Ranking Democrat Adam Schiff (D-CA), Central Valley Congressman David Valadao (R-CA) and House Foreign Affairs Committee stalwart David Cicilline (D-RI). Conversations focused on everything from ongoing efforts to deliver justice for the Armenian Genocide and secure vital US aid to Armenia and Artsakh to assisting the beleaguered Armenian communities in the Middle East. On a lighter note, interns regaled Congressman Schiff with a warm Armenian rendition of “Happy Birthday” during a visit to his office.

The interns were also able to attend the House Foreign Affairs Committee hearing, where U.S. Ambassador to the United Nations Samantha Power was testifying before the committee.

Between visits to Capitol Hill, they also hosted a mixer to meet with the summer interns from the Armenian Assembly of America – an annual tradition to build friendships and share experiences.

Upon arrival over the weekend, the interns were welcomed by the ANC Richmond, Virginia chapter for their 69th annual picnic. There they met with Richmond City Councilman Jonathan Baliles and local leaders and learned about the history of the local Armenian community.

“Not too long ago, I discovered that I want to dedicate my life in the protection of human rights, especially minority rights. The ANCA Leo Sarkisian Internship is the perfect way to gain experience in this field, while allowing me to contribute to the Armenian Cause.” says AYF member Arevig Afarian. Nineteen years old, she recently started her bachelor’s program in Political Science at University of Montreal, though she is switching her program to International Studies with a minor in law. She’s a visiting member of the Armen Garo Student Association, the Montreal and Laval joint Armenian Student Association, and is actively working on re-establishing the ASA of her university. Arevig’s activism within her community is reflected through her past involvement in Hamazkayin, and presently at the Sourp Hagop Saturday School. She is also currently helping with the campaign of a potential Liberal Party candidate on the federal level. Her plan is to complete a master’s in International Law and to eventually get a PhD on a subject closely related to the Nagorno Karabakh issue.

Denise Altounian, of Santa Clarita, CA, is a recent graduate of California State University, Fresno. She completed her Bachelor’s degree in Political Science with a minor in Armenian Studies in 2014. During her time in Fresno she was an active participant in the Armenian community. As a student in the Armenian Studies Program she served as a staff writer for program’s newspaper Hye Sharzhoom. Further, Denise has taken on countless volunteer opportunities through the Charlie Keyan Armenian Community School, the Armenian Students Organization and Homemetmen. Following graduation she was an intern at the ANCA Western Region office in the Fall of 2014. Altounian sees the Leo Sarkisian Program as the perfect opportunity for the practical application of her studies, while expanding her knowledge of Armenian American politics. “I hope to gain additional knowledge of the issues important to Armenian Americans and carry that into my professional career to further the mission of Hai Tad.”

Patrick Babajanian is a rising junior at UC Berkeley, studying Peace and Conflict Studies as his major. He intends to minor in History and Russian. Apart from working for the ANCA this summer, he is involved year-round with the Armenian Student Association at UCB, as well as with other organizations such as UC Berkeley Model United Nations, Habitat for Humanity, Amnesty International, the Cal Fencing Club, and the Troika Journal. He is looking forward to working as part of the Leo Sarkisian Internship, seeing it as a great opportunity to express his desires for the Armenian community and channel his skills in pursuit of this goal. It is very important to him to give a voice to the voiceless and stand up for the underdogs in the world who deserve support but tend to receive little to none because of the complexities of the current international political system. According to Patrick, “I hope that through my work at the ANCA, I can help further the drive for justice for the Armenian community and help usher the world step by step into a future of peace, progress, and prosperity for all.”

Ripsime Biyazyan, of Van Nuys, CA, is a rising senior at Occidental College majoring in Diplomacy and World Affairs and has minors in Math and Economics. She has been the president of the Occidental College Armenian Student Association (ASA) for the past two years and is Director of Public Relations for the All-ASA, which consists of 13 schools and organizations from Southern California. Ripsime applied for this program upon completing an internship for the ANCA- Western Region in the Fall. She just returned from Cuba where she was utilizing a Young Initiative Grant from her school to do research for her senior thesis. Ripsime adds that “After completing Birthright, I wanted to find more outlets to help forward the Armenian Cause and broaden our horizons and the ANCA Leo Sarkisian Internship was the best way to do that while still helping me to forge a path for my potential future career.”

Dickran Khodanian is a recent graduate with a bachelor’s degree in History and Armenian Studies from California State University, Northridge. He has been a longtime activist in his local community by serving in organizations such as the Armenian Youth Federation San Fernando Valley “Sardarabad” Chapter and the CSUN Armenian Student Association. In addition, he has served as a senator for the Associated Student Government of CSUN. As a longtime AYF member, he has had a strong passion for community activism and involvement that is seen in his work over the years in programs of the AYF and ASA. He plans to pursue his Ph.D in Armenian Studies. “I chose to take part in the ANCA Leo Sarkisian internship in Washington D.C. because as a community activist in the Armenian Diaspora, it is my responsibility to take advantage of the opportunities provided to diasporans because they will ultimately help us become successful and even more effective leaders in our communities around the world.”

Erik Khzmalyan is a senior at Southwest Minnesota State University majoring in political science. He is a former ANCA-WR intern and has actively participated in events such as the ANCA Western Region Advocacy Day in California State Capitol and the annual ANCA Western Region banquet. Erik is a contributing writer for “The Armenite,” an online periodical for Armenian culture, politics, society, and the arts as well as a fellow at the ERA Institute, a think-thank conducting research projects on the political and economic developments in the Eurasian continent. “As a political science major interning in Washington, DC this is a dream come true. Applying the knowledge and theories that I studied in college on practical projects is highly useful. This internship is a great opportunity to expand my horizons about politics, conduct sophisticated research on issues concerning the Armenian Cause, and make a modest contribution to my community. I am sure the experience we are gaining will have an immense impact on the shaping of our careers as young professionals and helping us to find our own paths to success. Rock on ANCA!”

Shaunt Tchakmak is a semester away from graduating from York University in Toronto, Ontario with an honors degree in Political Science. Shaunt has served as an active member of the Toronto Armenian community and held leadership positions in the local AYF chapter. It was through his activism in the Armenian Community that Shaunt realized his passion for politics. Today he is on track to complete his second term on the executive committee of the Ontario Young Liberals serving as Vice President of Provincial Affairs. Through his involvement, Shaunt has earned the honor of interning for the Government of Ontario for the past three summer terms. Shaunt is excited to apply his knowledge and political skill here in Washington. “The work of the ANCA is truly at the forefront of the Armenian Cause” Shaunt explains, “I hope to learn how to optimize my own political involvement to be the best possible champion of Armenian rights in the political arena.”