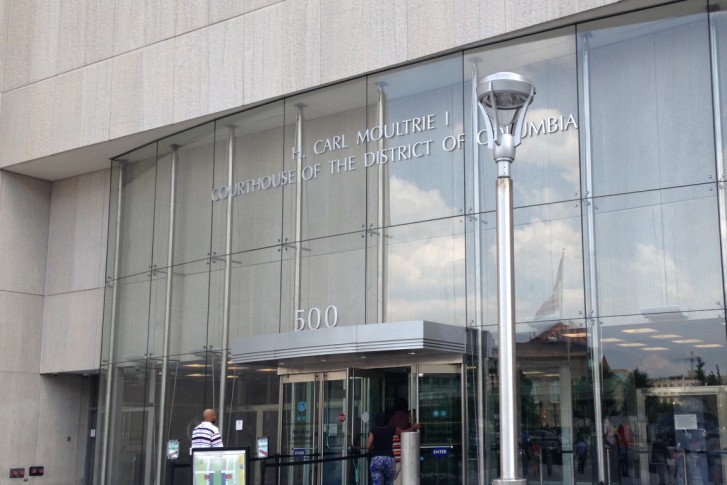 WASHINGTON, DC — Armenian National Committee of America (ANCA) Executive Director Aram Hamparian, a witness to the May 16th Erdogan-ordered attacks on peaceful protesters in Washington, DC, sharply criticized a Washington DC Superior Court ruling today which gave light sentences to two of the Turkish American attackers. They had initially been charged with hate crimes and other violations and faced up to 15 years of incarceration.

Eyup Yildirim and Sinan Narin received sentences of one year and one day in prison, with credit for time served; three years of supervised release; and a fine of $100 each.
]

“This decision should worry every American,” said ANCA Executive Director Aram Hamparian. “Today’s light sentences – on top of the Administration dropping most charges and failing to seek any extraditions of Erdogan’s bodyguards – threatens to chill the free exercise of the First Amendment rights of Americans of Armenian or any other heritage to protest the actions of a foreign government.”

“As Americans, it’s our right to raise our voices on any issue – foreign or domestic – free from fear of violent attack, and confident that those who violate our rights will be brought to justice. Sadly, that has not been the case in response to Erdogan’s open export of his regime’s violence to the streets of Washington, DC. This backwards “Turkey First” approach defends foreign attackers instead of protecting American freedoms,” concluded Hamparian.

Hamparian and representatives of the ANCA and the Armenian Legal Center for Justice and Human Rights (ALC) were on hand at District of Columbia Superior Court when Judge Marisa Demeo announced the ruling for Yildirim and Narin, two of the 19 perpetrators indicted for the brutal beatings, which included 15 members of Turkish President Erdogan’s security detail, and two Canadians, who have reportedly since repatriated to Turkey. All 19 defendants were indicted on charges of conspiracy to commit a crime of violence, with a bias crime enhancement – charges of hate crimes – which carry a maximum 15 years prison sentence. The court decision overlooked hate-crimes component of the charges, which have been reduced to one charge of assault.

Judge Demeo’s decision came despite powerful community impact and victim impact statements offered by the ALC’s Kate Nahapetian and several of the targets of the attacks including Ms. Lusik Usoyan, Founder and President of the Ezidi Relief Fund and Mr. Murat Yusa, a local businessman and protest organizer, and Abbas Azzizi. Yildirim was videotaped kicking Yusa in the head and face multiple times while he was on the ground in a prone position resulting in a concussion, a broken tooth, two loose teeth and head laceration that required five stitches. Usoyan was knocked unconscious by Narin and others during the attack, leading to a concussion, memory loss, and dizziness which required repeated visits to the hospital for treatment. Usoyan, Yusa and Azzizi were allowed to make oral statements to court in addition written statements.

“The case against Sinan Narin and Eyup Yildirim is not just about a violent assault, which on its own should merit severe punishment, but it is a case closely associated with a coordinated assault by foreign government security forces on the bodies of our citizens and on our foundational principles of free assembly and speech,” stated ALC Executive Director Kate Nahapetian. “The world is watching. But more importantly, the people of America are watching, the police who had to risk their lives protecting women and children from Narin and Yildirim and unhinged armed foreign security personnel are watching, the protesters who were severely bloodied, beaten and suffered lasting physical injuries and emotional trauma are watching, and Armenian Americans who will be protesting Turkey’s state-sponsored denial of the Armenian Genocide in just a few weeks on April 24, are watching to see, if they will be safe in DC.”

The ALC’s complete statement is available at:
http://armenianlegal.org/wp-content/uploads/2018/04/Community-Impact-Statement-4.5.18.pdf

Yildirim and Narin were arrested on June 14, 2017 and have been in jail since. They have been the darlings of the Erdogan Administration, with Turkish Foreign Minister Mevlut Cavusoglu proudly tweeting after a September, 2017 visit, “We visit and send the love and regards of our nation to our brothers Sinan Narin and Eyup Yildirim, who are under arrest in Washington.” On March 22nd, they were visited by several members of the Turkish Parliament Foreign Affairs Committee, including Chairman Volkan Bozkir, who tweeted photos with the smiling prisoners.

The court decision follows news, first reported by the Wall Street Journal in March, that charges against 11 of the 15 members of Erdogan’s security detail had been dropped – four on November 7, 2017, the day Turkish Prime Minister Yildirim flew to Washington for talks; seven on February 14th, the day before Secretary of State Rex Tillerson travelled to Ankara for meetings with President Erdogan. The State Department claims that the timing of the dropped charges was simply a coincidence. Senate and House Members immediately expressed concerns, with senior Senate Foreign Relations Committee member Ben Cardin (D-MD) noted “I am deeply alarmed that the Trump Administration prefers to appease Erdogan over upholding the rights of Americans to protest peacefully without fear of violence from foreign security forces. Yet again, this Administration is trampling on the rule of law.” House Foreign Affairs Committee member Dana Rohrabacher (R-CA), noted “If this is as it appears, the decision sends exactly the wrong signal to Erdogan, who is aligning his authoritarian government with radical Islamists and who carries out the same sort of brutal attacks on his own citizens as he allowed, within his sight, to be committed on American soil. This outrage must not go unpunished.” New Jersey Congressman Bill Pascrell has called for a Department of Justice investigation into the matter.

ANCA Executive Director Aram Hamparian was videotaping live at the scene of the May 16th attack, which took place in front of the Turkish Ambassador’s residence where President Erdogan was scheduled to have a closed-door meeting with think tank leaders. Hamparian’s video showed pro-Erdogan forces crossing a police line and beating peaceful protesters – elderly men and several women – who were on the ground bleeding during most of the attack.

Hamparian testified before a May 25th Foreign Affairs Subcommittee hearing on this matter. Joining him at the hearing were Usoyan, Yusa, and Ms. Ruth Wedgwood, Edward B. Burling Professor of International Law and Diplomacy, at Johns Hopkins University School of Advanced International Studies. Usoyan and Yusa were victims of the brutal assault on May 16th by President Erdogan’s bodyguards.

On June 6th, with a vote of 397 to 0, the U.S. House of Representatives unanimously condemned Turkey in response to the attacks, taking a powerful stand against Ankara’s attempts to export its violence and intolerance to America’s shores. H.Res.354, spearheaded by House Foreign Affairs Committee Chairman Ed Royce (R-CA), Ranking Democrat Eliot Engel (D-NY), House Majority Leader Kevin McCarthy (R-CA) and Democratic Whip Steny Hoyer (D-MD), has received the public backing of House Speaker Paul Ryan (R-WI). On July 14th, the U.S. House also unanimously adopted an amendment to the National Defense Authorization Bill, championed by Armenian Caucus Co-Chairman David Trott (R-MI), raising objections to a proposed U.S. sale of handguns for use by the very Erdogan security detail involved in the May 16th attack. Efforts to block the gun sale continued in the U.S. Senate, with the successful Appropriations Committee adoption of an amendment by Senators Chris Van Hollen (D-MD) and Senate Appropriations Committee Vice-Chairman Patrick Leahy (D-VT) in September. The Trump Administration officially withdrew its controversial proposal to allow the sale of U.S. semi-automatic handguns to Turkey shortly thereafter.

On July 19th, senior members of the U.S. House Foreign Affairs Committee Dana Rohrabacher (R-CA) and Ted Poe (R-TX), Tom Lantos Human Rights Commission Co-Chairman Jim McGovern (D-MA), and Representatives Jim Costa (D-CA) and John Sarbanes (D-MD) condemned Turkish President Erdogan’s violent actions – both in Turkey and the U.S. – during “A Stand for Free Speech” held at the site of the May 16th attacks. The press conference and rally was organized by the ANCA, in coordination with the Sheridan Circle May 16 Initiative (including many victims of the beatings), and a host of Kurdish, Armenian, Greek, Assyrian, and Christian groups including the American Kurdish Association (AKA), In Defense of Christians, American Hellenic Council, Armenian Legal Center for Justice and Human Rights, A Demand for Action, Hellenic American Leadership Council, AHEPA, and the Armenian Youth Federation.