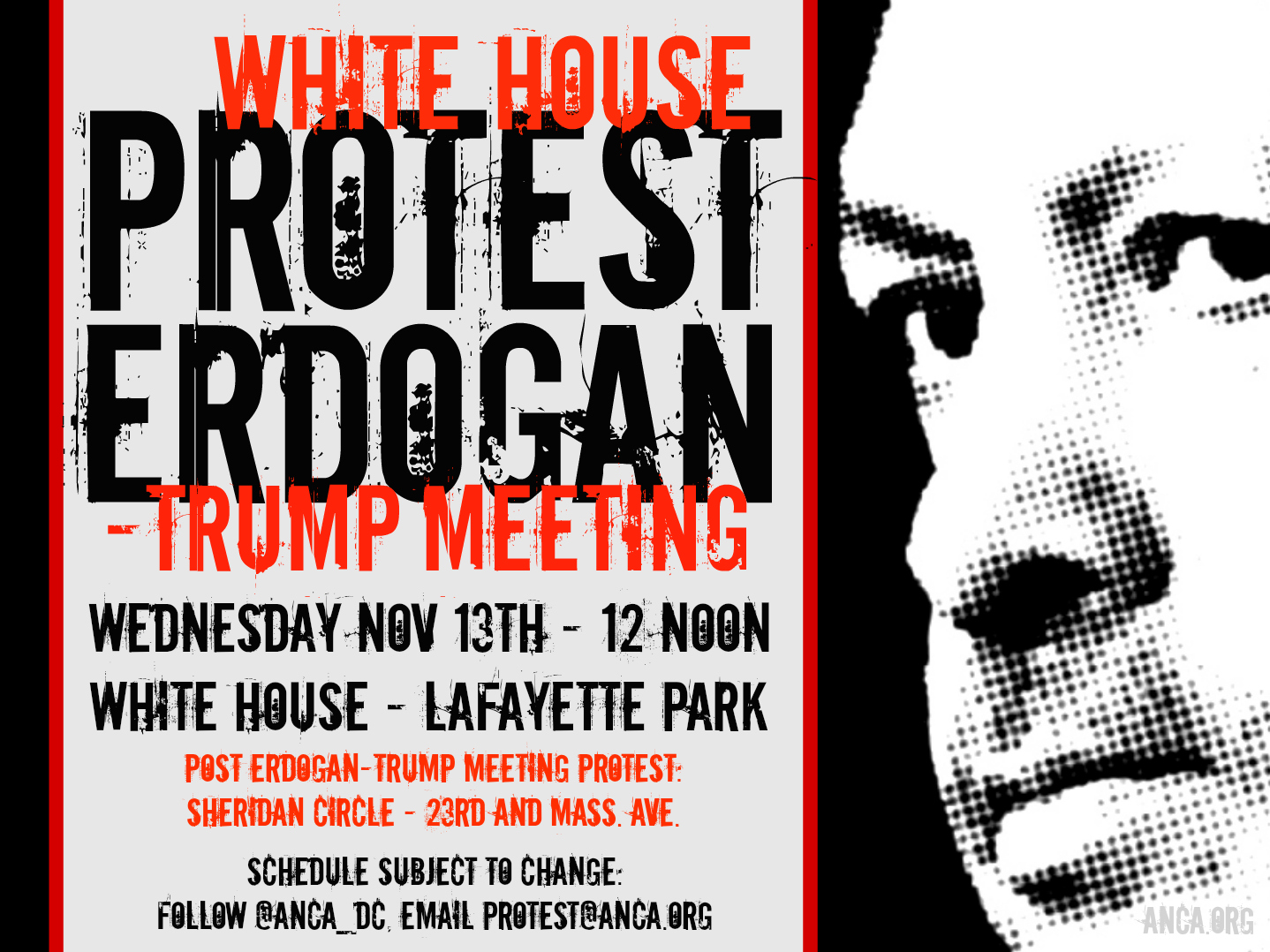 Groups including the Hellenic American Leadership Council (HALC), American Hellenic Educational and Progressive Association (AHEPA), American Hellenic Institute, In Defense of Christians, Armenian Youth Federation and American Rojava Center for Democracy are calling attention to a wide array Turkish transgressions from Ankara’s recent invasion of northern Syria to its ongoing crackdown against Kurdish communities, occupation of Cyprus, oppression of Christian and other minority communities, crushing of dissent, jailing of journalists, blockading of Armenia, and denial of the Genocide committed against the Armenian, Greek, Assyrian/Syriac/Chaldean, and Maronite nations.

“Turkey long ago walked away from NATO, turned its back on the US and yet still expects to have a veto over US policy on issues, and that needs to end,” ANCA Executive Director Aram Hamparian told the Jerusalem Post earlier today. “Erdogan is extremely open about the direction he’s taking his country. And I think every aspect of our political system here in America, especially here in Washington, has woken up to this fact. But the last holdout is the White House. We’re protesting to help bring that to an end,” continued Hamparian.

The Trump-Erdogan meeting comes just two weeks after the U.S. House near-unanimous passage of the Armenian Genocide Resolution (H.Res.296), which establishes, as a matter of U.S. policy, 1) the rejection of Armenian Genocide denial, 2) ongoing official U.S. government recognition and remembrance of this crime, and 3) support for education about the Armenian Genocide in order to help prevent modern-day atrocities. Representatives Adam Schiff (D-CA) and Gus Bilirakis (R-FL) led the House effort, while Senators Bob Menendez (D-NJ) and Ted Cruz (R-TX) are spearheading the pending Senate measure (S.Res.150).

The protest is set to begin Wednesday, November 13th at 12:00 noon at Lafayette Park, across from the White House. The timing of the White House protest is subject to change based on the Trump-Erdogan White House meeting schedule. Following the meeting, protesters will go to Sheridan Circle, the site of May 16, 2017, protest where video evidence showed that President Erdogan ordered his security detail and supporters to attack peaceful protesters, sending multiple protesters, police and secret service to the hospital.

Earlier today, the ANCA called on the White House to bring up the latest ISIS killing of Armenian Catholic Priest Hovsep Petoian and his father, who were traveling from the Syrian town of Qamishli to Der-Zor to review the rebuilding of an Armenian Catholic Church there. According to news reports, Turkey’s attacks on Kurdish led anti-ISIS defense groups in Syria last month created a vacuum allowing ISIS sleeper cells to reactivate in the region.

“We look to President Trump to publicly press Turkish President Erdogan this Wednesday for answers regarding today’s murder by ISIS militants of a Catholic Armenian priest and his father, in a region of Syria that has fallen increasingly under the control of Ankara’s allies,” the ANCA’s Aram Hamparian stated following news of the murder earlier today.

A copy of the letter is available here: http://anca.org/assets/pdf/110819_Engel_Erdoganletter.pdf

Rep. Liz Cheney (R-WY) defended the First Amendment rights of Armenians, Greeks, and Yezidis and others to protest the Erdogan visit, calling on Secretary of State Pompeo to immediately expel members of President Erdogan’s security detail who attacked peaceful protesters in 2017. “This behavior is sadly routine for President Erdogan on Turkish soil. It is wrong and disturbing there, and it is an affront to American values and entirely unwelcome here. The Erdogan regime’s use of violence against civilians anywhere is inhumane, uncivilized, and unacceptable,” wrote Rep. Cheney, who is the third-highest GOP leader in the House.

In October, Cheney introduced legislation sanctioning Turkey for its invasion into northern Syria and the purchase of Russian-made S-400 missiles (H.R.4692), which received over 115 cosponsors. On October 29th, a similar sanctions measure (H.R.4695), introduced by Chairman Engel, was adopted by the House by a vote of 403 to 16.

A copy of the letter is available here: http://anca.org/assets/pdf/111119_Cheney_Erdogan.png

Rep. Crenshaw urges State Department and DC Police to Protect First Amendment Rights of anti-Erdogan Protesters
The ANCA is encouraging Representatives to co-sign Rep. Dan Crenshaw’s (R-TX) Congressional letter asking the State Department and the Washington, DC Metropolitan Police Department “to ensure President Erdogan and his security detail are aware of and understand that Americans enjoy First Amendment rights to assembly and speech. Support for the bi-partisan effort is growing, with the letter to be delivered by the close of business on November 12th.

In a letter to Secretary of State Pompeo sent earlier today, the ANCA called for the release of any information regarding the use of “unknown aerosol” by Erdogan’s security forces against peaceful protesters at Sheridan Circle in May, 2017.

A copy of the letter is available here:
http://anca.org/assets/pdf/111119_ANCA_Pompeo_Sheridan_Aerosol.pdf

A declassified report received as part of a Freedom of Information Act (FOIA) filing reveals Erdogan’s bodyguards sprayed an “unknown aerosol” on protesters during May 2017 attack in Washington, DC. The Agent-in-Charge of the State Department’s Dignitary Protection Division, in an official “Situation Report,” reported that: “MPD [Metropolitan Police Department] officers stated that Turkish security offers used some sort of unknown aerosol on the protesters which they are investigating further.”

The Agent-in-Charge, whose name is redacted in the report was responsible for the State Department Bureau of Diplomatic Security’s detail protecting the Turkish President during his visit to Washington, DC.

On May 16, 2017, ANCA Executive Director Aram Hamparian videotaped the brutal attack of peaceful protesters by President Erdogan’s security detail and supporters at Washington, DC’s Sheridan Circle, across from the Turkish Ambassador’s residence, where Erdogan was scheduled to have a closed-door meeting with think tank leaders. Hamparian’s viral video showed pro-Erdogan forces crossing a police line and beating peaceful protesters – elderly men and several women – who were on the ground bleeding during most of the attack. Voice of America video of the attacks offered strong evidence that President Erdogan had personally ordered the attack.

Newly released documents reveal there was yet another altercation, this time between Turkey Foreign Minister Cavusoglu’s security detail and U.S. Secret Service and the Metropolitan Police Department at the Turkish Embassy, in which two Diplomatic Security special agents, six U.S. Secret Service officers and one MPD officer sustained multiple injuries, with at least one taken to the hospital. The Turkish Ambassador negotiated the release of two Turkey Security Detail members, with the whole group immediately taken to Andrews Airforce Base for their return to Turkey.

Nineteen perpetrators were indicted for the brutal beatings, which included 15 members of Turkish President Erdogan’s security detail, two Canadians, who reportedly repatriated to Turkey, and two Turkish Americans. All 19 defendants were indicted on charges of conspiracy to commit a crime of violence, with a bias crime enhancement – charges of hate crimes – which carry a maximum 15 years prison sentence. Two of those indicted – Eyup Yildirim and Sinan Narin – pled guilty to one assault charge and served one year in prison. Based on a plea deal, the hate-crimes component of the charges was removed. They were released in March 2018.

The May 16, 2017, protest in front of the Turkish Ambassador’s residence was a continuation of a demonstration held earlier in the day in front of the White House, co-hosted by the ANCA. As President Trump met with President Erdogan, human rights and religious rights groups were joined by representatives of the Kurdish, Yezidi and Armenian communities to call attention to the Erdogan regime’s escalating repression against free press, the Kurdish and other ethnic communities, as well as Turkey’s ongoing obstruction of justice for the Armenian Genocide.

ANCA Video of May 16, 2017, Erdogan-ordered attacks at Sheridan Circle in Washington, DC